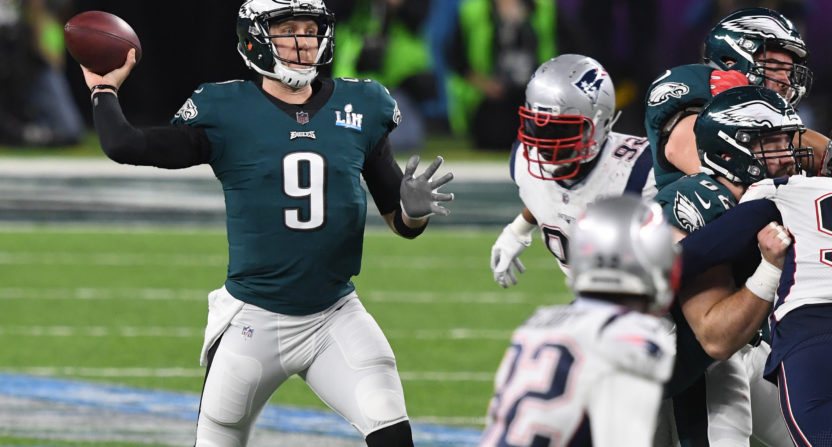 While most of us were enjoying Super Bowl LII on our own flat-screen TVs, on large screens at a bar, or even in person at U.S. Bank Stadium last Sunday, a select group of people was able to watch the Philadelphia Eagles and New England Patriots in virtual reality streaming over a 5G connection.

Was this in a suite at the stadium, maybe for NFL commissioner Roger Goodell and his friends (or league VIPs)? Did Bill Belichick and Robert Kraft have a special room set up somewhere, hoping to gain an advantage over the Eagles and coach Doug Pederson?

No, the VR and 5G magic was happening in New York City, where a group of Verizon employees got to watch the Super Bowl under circumstances most of us may never enjoy. Those in attendance didn’t watch the game on big-screen TVs, but instead took turns watching on a virtual reality headset powered by a Samsung Galaxy 8.

It was part of a “stress test” that engineers conducted for 20 employees and network partners, which was apparently viewed as a success.

Donning virtual reality headsets, network engineers at Alley, Powered by Verizon in New York City and Verizon guests at the Super Bowl at US Bank Stadium in Minneapolis participated in a live demonstration of 180-degree stereoscopic in-stadium view live action on the field, as well as a virtual in-stadium experience including high-resolution replays on secondary screens, all delivered over 5G wireless technology.

The project began in November, as equipment was installed in Verizon’s suite at U.S. Bank Stadium. Two 4K cameras were set in seats below the suite in December, and engineers ran tests during Vikings home games to see if equipment was set up and positioned correctly for a streaming broadcast.

Several other sports and network partners have dabbled in virtual reality telecasts. Last year, Turner and CBS did so with the NCAA Tournament, while NESN aired four Boston Red Sox games in that format. College and professional football teams have also employed virtual reality technology in their game preparations.

But we’re a long way from more people being able to watch games like that group of 20 people did at Verizon’s showcase in New York City. Not only do you need the virtual reality headset and a smartphone that can handle the broadcast, but very few communities are set up for a 5G connection. Verizon is planning on testing residential 5G broadband in three to five markets this year, starting in Sacramento, California. Meanwhile, rival AT&T intends to test 5G in 12 markets.