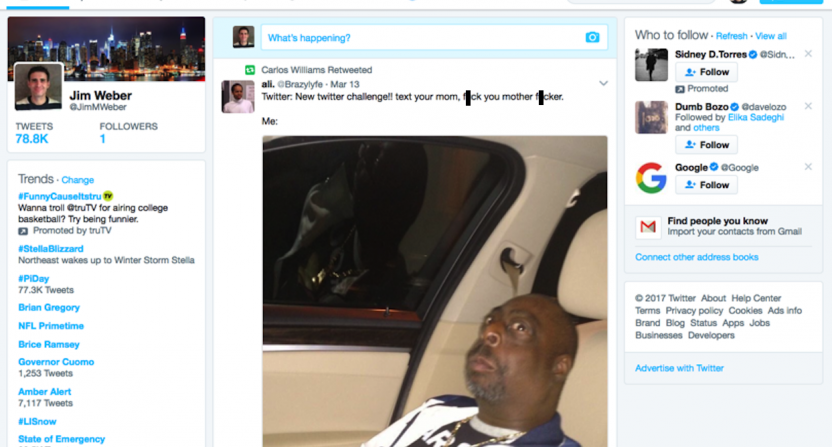 For the second time in seven months, I am back in Twitter Jail and it’s starting to feel a lot like the infamous Gitmo.

One minute I’m excitedly tweeting about the NCAA tournament and the next, a black bag has been put over my head, I’ve been renditioned to Twitter jail and am held indefinitely without any charges.

Such was my experience on Monday, along with other sports accounts such as @SBNation, for apparently violating copyright rules regarding the NCAA tournament.

Last time, when I was suspended for posting an Olympics GIF of gymnast Aly Raisman, I didn’t realize I was warned to take the GIF down until my account had already been suspended. This time, I’ve been in Twitter Jail for nearly 24 hours and still don’t know what specifically I did wrong.

Granted, I might not have received a violations notice because I put an email filter on Twitter notifications due to them flooding my inbox. But I was never given a warning on the application itself and have since emailed Twitter support and an employee several times and not received any word back about what I did wrong or how long my account will be suspended for.

I’m guessing my emails are sitting in a Twitter employee’s inbox with about 10,000 similar ones ahead of it. 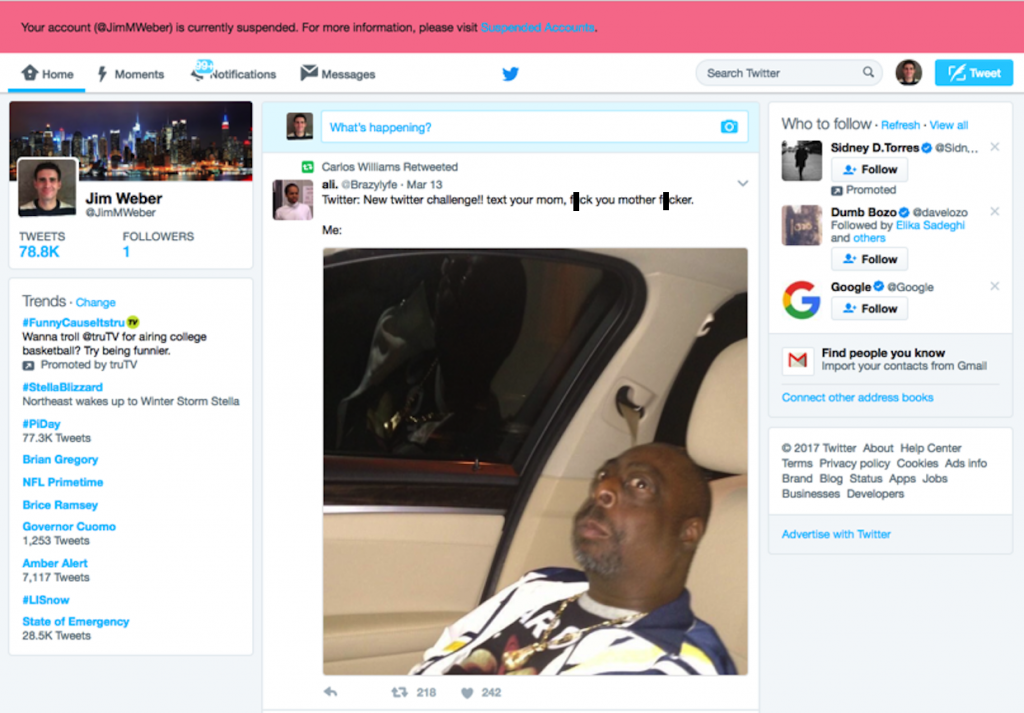 My account has been stuck like this since the suspension and yes, the look on that guy’s face has been creeping me out for the last 24 hours.

Now, I’m sure there are a bunch of people reading this saying to themselves, “If you don’t want to get suspended, stop breaking the rules, a**hole!”

But this isn’t just about my account. There is a pattern to how Twitter operates in the that is totally dysfunctional and pointless.

It’s all very reminiscent of the way record companies sued random teenagers in the early 2000s for illegally downloaded music in order to scare the crap out of the masses and convince them to no longer use services like Napster. Except Twitter is doing it without any clear end goal.

If you recall, my account was permanently suspended last summer until I wrote about it for LinkedIn, the story went viral with nearly 400,000 views and Twitter reversed its decision in a matter of hours.

Of course, companies like SB Nation have powerful connections that can get them bailed out of Twitter Jail in a matter of hours (at the time of this writing, @SBNation is operational again).

But then there’s the little guy like me, of which there is an untold number, who don’t get articles written when there accounts are suspended and don’t have connections for a “Get out of Twitter Jail free” card.

It’s reasonable for Twitter to enforce copyright laws, but I think it would only be fair if the platform used some basic, common sense guidelines in doing so:

A. Be consistent — Be clear about what is and isn’t permissible to post on Twitter and don’t just pick one day out of the year to enforce it.

B. Give clear notification — Users should be notified on Twitter, not via email, that they are in violation of the Terms of Service and will be suspended if the tweet is not deleted. With filters, SPAM folders and multiple email accounts, only a small percentage of people who get suspended actually know they are on the verge of being thrown in Twitter jail. SB Nation and Deadspin can attest to that.

C. Give a reasonable window to respond — Last time I was only given minutes to respond to an email that I was in violation of copyright law. This time I had none. It’s only fair that if you demand something to be done, you give them a reasonable timeline — say, 24 hours — to do so.

But alas, Twitter does none of the above in its role as judge, jury and executioner.

And so I wait in my barracks with tin cup in hand again wondering what I did wrong, when I will be freed and what purpose any of this serves.