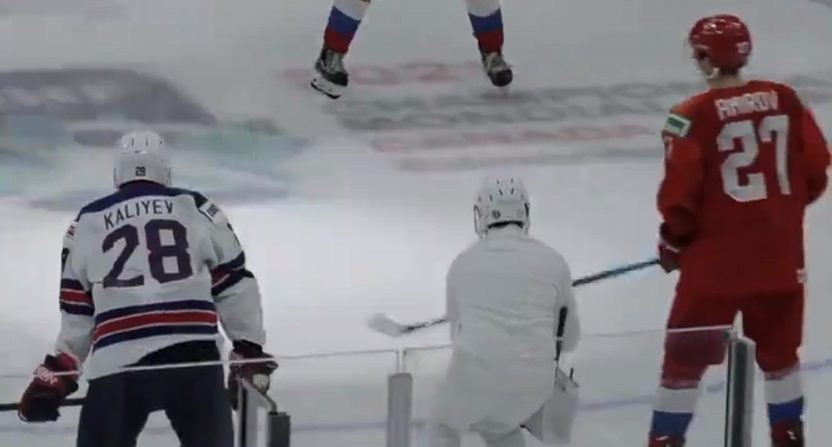 One of the most interesting parts of Canadian network TSN’s coverage of the World Junior Championships (one of their biggest events annually) over the past few years has been their use of a “ghost camera.” That involves a camera operator dressed all in white with a white-covered camera skating out onto the ice before and after the game and at stoppages to get some up-close shots, with the white clothing helping them blend in and not distract players too much.

TSN first did this as an experiment at the Ivan Hlinka-Wayne Gretzky Hlinka-Gretzky Cup U18 tournament in 2018. They’ve expanded it since for several international hockey events, including the World Juniors since 2019. Other networks have used on-ice cameras as well, but not as frequently. Here’s a look at how this works that camera operator Nathan Eidse (who’s handling this role in Halifax this year, with Devin Comeault doing that in the other host city of Moncton) posted to his Instagram page back in 2019:

Here’s another look at it, also featuring Eidse, from a 2020 TSN video:

Kevin McGran of The Toronto Star has a great piece on this, speaking to Eidse, TSN vice president in charge of live event production Paul Graham, Team Canada captain Shane Wright, and more. And Eidse credits one specific influence for helping them pull this off; NHL star turned TNT analyst Gretzky.

That first time, Eidse wore white but the camera was black. Gretzky was there and talked to him.

“We were chatting about it and he said how much he loved the camera — he thought it was great — but the camera needed to be covered in white,” says Eidse.

“The camera didn’t have a cover at that time, because the idea was fairly fresh. In fact, I went out to Winners and bought white pants and a white shirt an hour before our first game. Selection was limited, so it didn’t look pretty. But Gretzky was the one that said we need to cover the camera in white.”

Eidse initially made that move with a pillowcase, but he now has a custom white cover. So that’s yet another assist for Gretzky. And the results here have been impressive, and have even led to some fan salutes:

? Even the on-ice camera guy is becoming a fan favourite at this tournament ?? #SWEFIN #WorldJuniors pic.twitter.com/rbXhOdZPDt

Joshua Clipperton of The Canadian Press also wrote on this, and got some good quotes from Eidse and from various players:

“It’s not lost on me that I have the best seat in the house,” Eidse said between two recent games. “It’s pretty neat to be in the middle of everything.”

…”Knock on wood, never been hit with a puck,” he said. “I try and patrol the red line as much as possible. Then I pick my moments and get in there.”

…”Weird the first time,” Austrian forward Vinzenz Rohrer said. “Hats off to this guy. He always sneaks through everybody.”

And Graham told McGran he’s thrilled with how this has worked out for the network:

“We’re always looking to do things differently,” says Paul Graham, TSN’s vice-president in charge of live-event production. “I saw it over in Switzerland seven or eight years ago, but it wasn’t very good in terms of the guy who was skating and how they incorporated it. It was cool, but I’m thinking, ‘OK, we can do something better.’”

…It has also evolved: from just on-ice shots, to the beginning of a period, to what it is now: almost every stoppage in play.

“There was a great shot of (Canadian forward) Connor Bedard,” says Graham. “He was on the ice, right in front of Connor, a shot that you will never see (elsewhere) … in your face, as Connor Bedard sat on the bench.”

So the on-ice camera approach looks to be a continued feature of TSN’s international hockey coverage for some time. And Gretzky’s suggestion was useful in making that happen.

[The Toronto Star, The Canadian Press; image from TSN on Twitter]