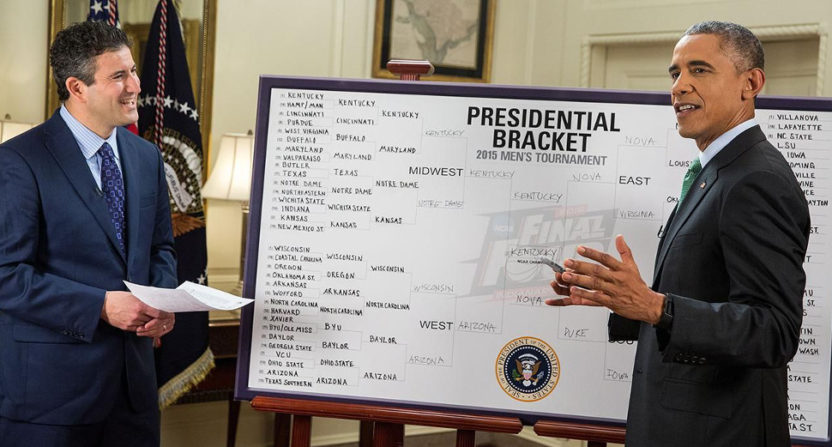 Some conferences have tried to discourage or ban attendees from tweeting or posting anything to social media platforms during individual panels, and that’s controversial enough in its own right. But the ESPN-sponsored Sloan Sports Analytics Conference in Boston is going even further when it comes to their much-hyped “Conversation With Barack Obama” panel, announcing this week that attendees will not only be banned from those activities during the panel, but also from reporting on Obama’s comments afterwards:

I will NOT be bringing you live updates on the #SSAC18 session with @BarackObama this weekend. pic.twitter.com/vIwIewEne2

This feels highly unprecedented for a sports event. Yes, sports reporters sometimes attend events where embargoed information can’t be revealed until later, but this isn’t even an embargo that will be later lifted, it’s a ban in perpetuity. It’s making an entire conference panel permanently off-the-record; if those terms are taken literally and everyone in attendance follows them to the letter, the comments in that panel will never be reported, discussed or taken beyond that room except in private conversations.

And what’s really incredible there is that this seems likely to create far more controversy around Obama’s appearance than any standard approach would. Consider Sloan’s description of Obama’s panel:

The 44th President of the United States, Barack Obama, will address the 2018 Sloan Sports Analytics Conference on February 23, 2018 at the Boston Convention and Exhibition Center. A lifelong sports fan and athlete, President Obama will address a wide range of subjects in his talk, from his most memorable moments in the White House, to his post-presidency plans. Daryl Morey and Jessica Gelman will moderate the discussion.

Nothing there seems all that controversial! And an open-to-the-public (tickets to the conference are sold out, but ranged from $250 for students to $600 for general admission to $850 for general admission plus to $2,500 for VIP passes) sports analytics conference hardly seems like the place for Obama to say anything that needs a lot of secrecy. But the secrecy here could lead to some ludicrous surmises; any site could decide to run a “Barack Obama reveals he was born on Mars, discusses secret plans to turn the U.S. into a giant Buffalo Wild Wings” headline about his remarks at the conference, and that couldn’t be disproven according to this policy. And it makes it more likely that this will get negative attention; “Obama talks about sports” isn’t much of a headline, but “Obama gives secret speech!” could get play in some places.

Of course, there are potential ways around this. While those in attendance could risk a ban from future Sloan conferences for relaying Obama’s remarks publicly, some might be willing to do that. Others might be willing to pass the remarks on anonymously to reporters who weren’t in the room and don’t have interest in going to Sloan in the future, and there isn’t much the conference could presumably do to stop that. And if Obama actually does say anything notable, it seems like a good bet that that will happen; this isn’t a carefully-controlled guest list that’s going to necessarily abide by these imposed conditions, and there may be a whole lot of reporters and media members who chafe against this idea and decide to break Sloan’s policy, either reporting this themselves and risking removal or passing the remarks on anonymously.

But this is requiring a ridiculous run-around, and preventing those who actually pay to be in that room from getting the value of attending. Plus, some of those attendees may have signed up particularly based on the idea of reporting on what Obama says here, only to then lose that value when the conference unilaterally declared these restrictions later. It’s a bad look for Sloan, and one that other conferences hopefully won’t follow. It also confirms that they remain the second-best Sloan at most.