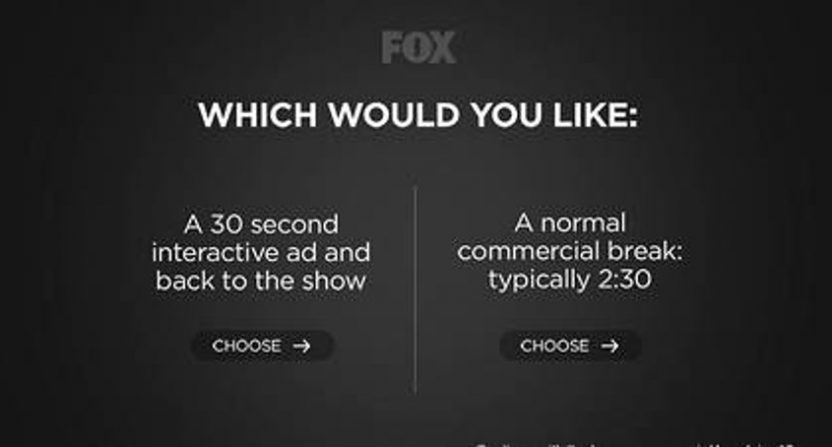 It’s no secret that traditional television advertising is facing major challenges, and that includes sports. While sports have significant advantages over other programming thanks to the numbers of people who want to watch them live, there are still concerns about how ads are presented within sports programming. Earlier this month, Disney CEO Bob Iger said there is “too much commercial interruption” on TV in general and talked about examining ad load across ABC and ESPN, while NFL commissioner Roger Goodell has discussed reevaluating that league’s ad windows (and they already tried some changes in Week 16 last year) for its broadcasts, CBS chairman Les Moonves has talked about “reformatting” NFL ad breaks and otherwise speeding up the game, and Turner just tweaked their NBA ads with the new single-advertiser, wraparound content “superpod” idea. A further shift still might come from engagement technology currently being used for on-demand streams online and now on connected-TV devices, which Jeanine Poggi discusses at Advertising Age in the context of TrueX, a company Fox bought for $200 million back in February 2015:

The TrueX idea of interactive ads has been floating around for decades, with little success. What makes TrueX’s efforts a bit different than the clunky attempts of the past is the clear value proposition to viewers: the exchange of a minute or so of attention for a subsequently less cluttered experience. Now as more TV content is delivered via IP-enabled devices instead of set-top boxes, what TrueX is crafting on desktop and mobile could have important implications for larger screens. In December, TrueX brought its engagement ad model to the living-room TV with the introduction of sponsored streams on Roku in the FX app.

“Our goal is to go from a linear TV ad model of 18 to 20 minutes of commercials per hour to around 60 seconds in digital and on-demand,” said David Levy, a TrueX co-founder who became exec VP-nonlinear revenue at Fox Networks Group in September. “We are trying to figure out how to create new models that transfer attention more efficiently.”

…Fox is testing a VOD ad product that alerts consumers at the top of the program that the episode is being brought to them with limited commercials by a brand. They are then shown a 60-second ad for that marketer. The rest of the episode airs with just two-second spots for the marketer running in place of traditional commercial breaks. That lets Fox reduce both the ads and the repetition in VOD.

At the moment, these kinds of engagement ads aren’t really being used in sports, but they certainly could be. That’s perhaps especially true on the streaming side. There would be some challenges with some properties (for example, if MLB or NFL games have commercial breaks determined by the TV side, reducing the amount of commercial breaks for the streaming side wouldn’t really work), but what about something like soccer, where commercials are typically only shown before and after the match and at halftime? Interactive ads on streaming there might let viewers see more studio analysis or highlights at those points, rather than just traditional commercials.

Moreover, if ad loads are dialed down on the TV side for other properties, that could open more options for this kind of innovation on the streaming side. Also, if this works at Fox, it would probably be copied elsewhere, the way many good innovations are. And the other vital potential sports connection here is a negative one; what if this isn’t really applied to sports, but is highly successful with other programming? That might cut into sports’ “DVR-proof” advantage.

Poggi’s piece is also notable for its discussion of how TrueX executives like Levy and fellow co-founder Joe Marchese (now Fox’s president of advanced advertising products) are now playing major roles in Fox overall. They’re already having an impact on how the company handles on-demand advertising, and if that continues to be successful (especially on connected TVs), it might just lead to them impacting Fox’s TV advertising overall. There are more challenges in bringing engagement to traditional TV, but there are ways to engage viewers there too with ads that feel more like content. (For example, Fox has actually done this very nicely with Lethal Weapon, putting Microsoft Surface-sponsored segments in ad slots that still feature the show’s characters discussing the case, but in a non-essential, product-promoting way.)

Of course, the TrueX approach is just one of many, and all networks are trying different things to see how they can engage ad viewers. Still, it’s very interesting that Fox is trying to offer shorter ads focused around engagement, and that they’ve given prominent ad roles to guys from this kind of background. If it works out for them, it could have implications for sports, and for the TV industry as a whole.