This means that none of the account’s past tweets are viewable. 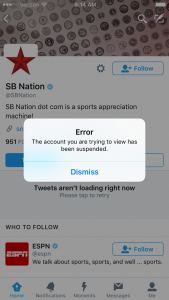 It’s unclear exactly why SB Nation’s account was suspended, but it’s likely because the account has shared March Madness gifs, and SB Nation didn’t have the privilege to post them. Deadspin and the SB Nation GIF accounts were suspended in October 2015 for posting NFL gifs, but both accounts are back and still regularly post gifs.

SB Nation will very likely be back relatively soon, as this sort of suspension is supposed to be a slap on the wrist for serial gif-sharers.

However, it’s unlikely to change SB Nation’s business practices all that much. Deadspin and SB Nation GIF still post gifs from copyrighted broadcasts all the time but have avoided being suspended again. Just about every major media brand posts gifs and videos from copyrighted broadcasts, including The Comeback. It’s how the world works these days, and it’s time for the sports TV world to adjust—they are not losing audience because some people posted gifs of their content.

As for Twitter, maybe the company should focus on suspending Nazis rather than people who share basketball gifs.