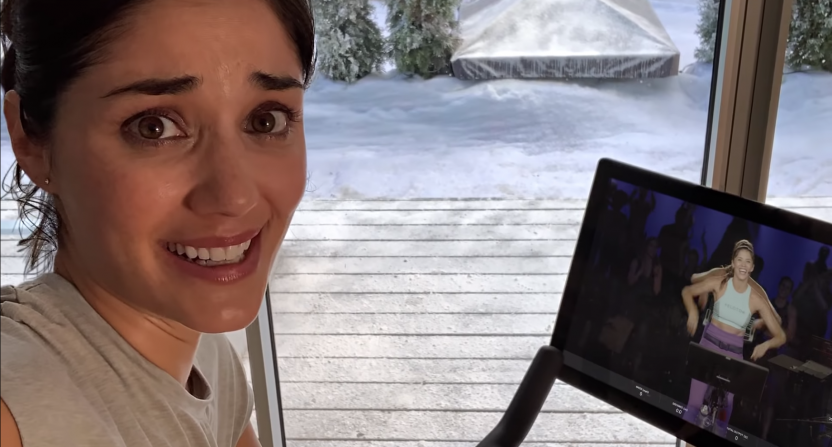 If you watched sports over the Thanksgiving holiday weekend, chances are you saw Peloton’s new “The Gift That Gives Back” ad.

If you’ve somehow managed to avoid it, the 30-second spot depicts a woman who receives a Peloton exercise bike for Christmas and proceeds to spend the next year filming herself using the stationary bike, presumably to appease the husband who bought her the gift.

Though the ad has run for the past month, it really caught fire on social media while most of us weren’t working and watching TV. While our nation is currently deeply divided on many social, economic, and political issues, it might be safe to say that we as a people are largely united in our disdain for this commercial.

It’s a painful ad to watch, feeling longer than 30 seconds to endure.

Why does the woman look so afraid in her videos? Is she fearful of the physical and mental challenges that the Peloton will present? Does she doubt whether or not she can overcome the obstacles that this bicycle and Peloton’s streaming class instructors put in front of her? Or is she scared that her husband will get mad if he thinks she’s not using the bike that he spent $3,000 (with $39 monthly membership for classes) on?

Twitter was flooded over the holiday with responses to the ad, many decrying that a thin, gorgeous woman would receive an exercise bike from her husband. Not thin enough for him? (Let’s try to be fair and guess that maybe he knows his wife is a workout junkie and bought her a top-of-the-line machine to use at home.)

So sweet. My husband was inspired by the Peloton ad to get me a pair of pants in a child’s medium and a handwritten note that says “Don’t fucking touch me till you can fit into these”

if my husband gave me a peloton (unsolicited) for christmas, he would be getting divorce papers for new years

That face you make when you have to videotape yourself exercising to prove to your husband that you're making every effort to (checks notes) look thin for him. #peloton pic.twitter.com/Hq6stoiETH

(But as Gayle King pointed out on CBS This Morning, wouldn’t there have been outrage if the woman had been overweight and her husband bought her an exercise bike?)

A few viewers went really dark with their view of the commercial.

Maybe the ad should also be criticized for not correctly portraying what’s likely to happen to that stationary bike within a month of its purchase.

If Peloton wanted to get people and potential customers talking about their product during the holiday shopping season, that objective has definitely been accomplished. But the backlash over this ad might also be causing a negative effect on its business.

On Tuesday, Peloton stock dropped dramatically, falling more than nine percent. That translates into $942 million in market value, according to Business Insider. (The stock is down an additional four percent Wednesday.)

A Raymond James analyst speculated that Peloton may have no choice but to pull the ad in the face of this consumer and stockholder revolt. However, some stock analysts are saying that the drop has nothing to do with this ad campaign and that Peloton stock was bound to drop after its initial public offering in September and a 35 percent climb in share price. (And as the New York Times pointed out, the overall stock market was down one percent on Tuesday.)

If the ad continues to run through the holiday season, however, jokes and outrage will surely continue. Maybe the actress portraying the wife in the commercial will go public and comment on the social media uproar. Until then, the online campaign to rescue this woman — and maybe her daughter too — gets stronger.