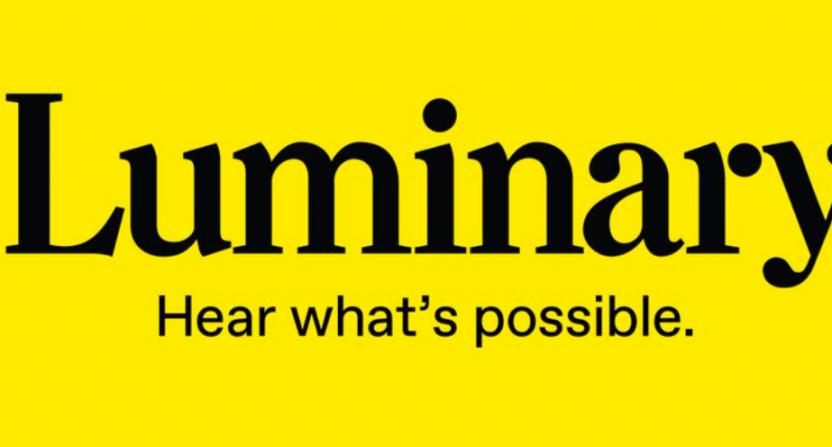 The thing about trying to revolutionize an industry is it’s pretty hard and it usually takes a lot of time. A lot of tech companies are trying to position themselves as the Netflix of their industry these days (hello, DAZN), but what that doesn’t take into account is that it took Netflix a solid 20 years to become the Netflix we know today. And they almost screwed it up quite a few times before they got here. Plus, for every Netflix who makes it out alive and becomes a dominant player, there are dozens of wannabes who burn bright and quickly fade away (Hi, MoviePass).

All of which is to say that when Luminary made their intentions clear to become “The Netflix of Podcasts,” they put a big target on their backs and everyone is lining up to take their shot. 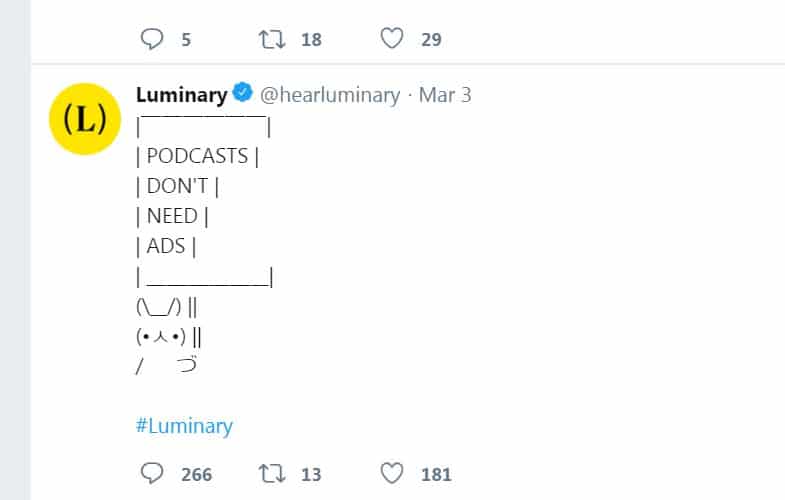 The new podcast company made its intentions known back in March when it tweeted out what it hoped would be a playful meme about how they want users to pat $7.99/month to avoid advertising. The reaction was pretty strong in the direction of “I can deal with a couple of ads in each episode so long as we don’t have to pay your dumb fee.” Not to mention the concern they raised to a lot of independent podcasts who count on those ads to provide revenue and would likely be the first ones cut out of the profits by this new model. The company quickly backtracked, saying “ads are an important part of podcasting, and a subscription model can be too.”

Fast-forward to Luminary’s official launch last week. While the company has qualified its business model to say that they’re merely providing a choice to consumers, certain content producers and media companies have taken their approach as the first launch in a war to control podcasting revenue, and they’ve responded by withholding their podcasts from the network.

When it rolls out to the public on iOS, Android, and the web, Luminary’s podcast app will be missing some of the industry’s biggest shows, including The New York Times’ The Daily and Gimlet Media shows like Reply All and Homecoming. Shows by Anchor’s network of smaller creators won’t be on the app, nor will series from Parcast, both of which are owned by Spotify.

Those are some pretty big names on the podcast listening charts, but that’s only the beginning of Luminary’s troubles. The company removed more than a dozen ESPN podcasts from their network over the weekend at their request. So if you want to listen to a 30 for 30 episode or The Dan Le Batard Show with Stugotz, you’re out of luck on Luminary. And while you might think these are niche audiences, when you pile all of ESPN’s audio offerings up they become one of the ten-biggest podcast publishers in the United States by unique monthly listeners, according to Podtrac, Inc. That is a humongous audience and potential subscription base that just disappeared for Luminary.

It’s also worth noting that The Joe Rogan Experience, Barstool Sports, and PodcastOne all pulled their content as well. Say what you will about any of them, but they are among the most-listened podcasts in the country and command not only a large audience but a lot of sway over how that audience consumes their show.

Add @barstoolsports to the list. Luminary’s rough launch continues as another high-profile podcast asks to be removed from its app https://t.co/T2VqEbQQlf via @NiemanLab

What’s the goal of all the media companies? First and foremost, it’s an attempt to sink Luminary before they get a foothold. All of the aforementioned companies have podcasts and exclusive shows of their own, but they see Luminary as a specific threat because the new app wants to make their audience exclusive, no matter which shows they listen to. It’s a foregone conclusion that we’re heading towards a premium or exclusive podcast war, much the way streaming services like Hulu, Disney+, and Netflix are headed, but this is a chance to head off “the Netflix of podcasts” before they can become “the Netflix of podcasts.” If Luminary succeeds and is able to grow their user base quickly, it’s going to drag the future of the industry in their direction. And companies like Spotify, who just invested in content creators like Gimlet and Parcast, want to control their own narrative (and business model).

And this is just the battle that Luminary created for themselves on the corporate level. Down below, they also find themselves in a major mess with small and independent podcasters after it was discovered that the app was populating its free tier with a technical methodology that was saving podcast feeds on their own servers and then providing their listeners with their own copies instead of the originals. Nieman Lab explains why that’s very bad:

If keeping cached copies of MP3 files doesn’t sound bad to you, it should. Podcasts use data generated by downloads of their own MP3 files to figure out how many listeners they have, which then allows them to sell advertising and sponsorships. If, say, 10 percent of a show’s listens came through Luminary, that 10 percent would be invisible to the podcast’s makers and thus unsellable to advertisers. It’s really bad!

Not to mention it’s a form of copyright infringement by presenting podcasts in a way not intended by the creator. Luminary responded by saying they weren’t, in fact, caching audio content but just creating a new link in order to mark it having been played via their service.

Naturally, few people believe Luminary’s good intentions because, well, based on everything we know about tech companies at this point, why would you presume one of them has good intentions? Especially when even if the company is being truthful, their system still messes up podcasters’ statistics, which then affects their ability to properly monetize their shows.

Re-hosting platforms (Spotify, Google, formerly Stitcher) prevent each download from being counted properly by the publisher, under-reporting their audience size.

Luminary swears they’ve fixed the issue in order to appease podcasters, but the damage has certainly been done in terms of perception. You only get one chance to make a first impression and even if Luminary cleans things up they’re going to have the stain of this rollout of them moving forward.

Luminary is not caching any audio content for any open feed podcast. The Luminary audio link is simply a reference link that is marking audio metadata as the file is called through our proxy.

I can’t think of a good reason to proxy all downloads 1:1 like this.

It won’t add any speed in practice — most downloads will actually be slower — and adds significant costs, will be interpreted as copyright infringement by many lawyers, and makes podcasters want to opt out.

We heard your concerns this morning and would like to share some information with you about #Luminary. pic.twitter.com/XOPwmJGmb4

According to The Verge, The NY Times is talking with Luminary about how to find a solution that makes sense to bring their content back, and Anchor is also in conversations with them. However, it doesn’t sound like Spotify is taking their calls at the moment. Chances are, neither is ESPN, who doesn’t want to give up any of that precious ad revenue.

You can still download Luminary to check out all of the cool features they offer and listen to any of the shows that are actually on their feed for now. But until they figure out a solution that provides these and other content providers with a fair financial shake, you’ll probably want to keep your old app on your phone as well to make sure you can listen to all the other shows you like.