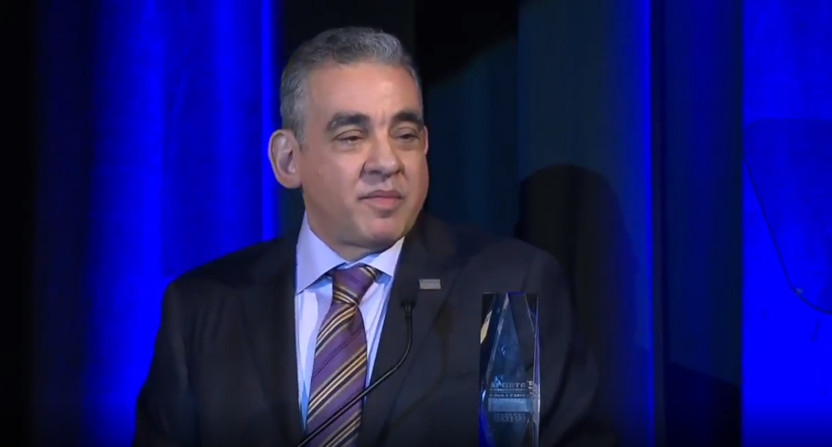 The Sports Broadcasting Hall of Fame held its annual induction ceremony Tuesday night in New York City, with that ceremony honoring 10 inductees this year (announced in August) from a wide range of sports media roles. From hosts and anchors like Bob Ley to announcers like Mike “Doc” Emrick, and from camera operators like Ken Woo to directors like Doug Wilson and Bob Fishman to executives like Steve Anderson, the people involved here represent a whole lot of different parts of the industry. But one particularly interesting induction speech came from Jerry Gepner.

Gepner was VP of field operations and engineering for Fox in the 90s. He was key to implementing the “Fox Box” (the on-screen clock and score graphic during NFL games). He later left to found Sportvision, which debuted the first 1st & Ten virtual first-down line on ESPN in September 1998. And he wound up doing a whole lot beyond that, too. Here’s his speech:

In the early days of Fox Sports, the network innovated sports TV with elements like the Fox Box, the Glow Puck, the First and Ten Line, and much more. The managerial mind behind much of that? Sports Broadcasting Hall of Famer Jerry Gepner. pic.twitter.com/OYOWvfeJgZ

Some good lines there come at 2:00: “When I first started in this business, my grandmother, who was an Eastern European immigrant to this country, asked my father what I did for a living. And he said ‘He’s a maintenance engineer in television.’ So to the day she left us, my grandmother never told anybody what my father had told her, because she was too embarrassed. She thought I was the guy who swept up in the station after everybody went home for the night. The truth was, I was sweeping up in the trucks after everybody went home at night!”

“I’ve been thinking of this and said ‘You know, if I had me working for me, I would have fired me a long time ago.’ And there’s a lot of truth to that. But it points to one of the great blessings of my career; people who didn’t fire me. Really, these folks deserve their own Hall of Fame.”

“I was a very average audio engineer, I was a passable TD (technical director), I could get through with video, I had no shot at camera, replay or graphics, so that left only one career choice. That’s management. If you can’t do any of that…”

But Gepner did some pretty incredible things in management, with his bio at the Sports Broadcasting Hall of Fame site illustrating the many, many roles he’s played over a long career in TV. The parts on the Fox Box and the 1st and Ten Line are particularly notable:

Among the innovations that Gepner was involved with at that time were the concept of a B unit; creating software to manage crew, travel, and more; and even the use of colored bibs on the NFL sideline to identify TV-crew members.

Key among his accomplishments at Fox was implementing the on-screen clock and score. In the early 1990s. stadium scoreboards didn’t have today’s external data connections. “We got used to the look of terror on a stadium manager’s face when we started soldering and cutting wires in his million-dollar scoreboard,” he recalls.

The challenge was exacerbated because stadium scoreboards weren’t all the same, Goren explains. “I think we were literally still wiring AFC stadiums after the season had started.”

Adds [Fox exec David] Hill, “He took on my very cavalier request that we give viewers live data from each NFL scoreboard, giving Fox Sports viewers live, up-to-the-second scores for the first time to feed the then-mocked Fox Box.”

“The vision for 1st & Ten came from David Hill and John Madden at Fox, but it took the creation of Sportvision to aggregate the resources and make it a reality. And it took the commitment of Jed Drake at ESPN to get it on the air.”

Adds [Fox exec Ed] Goren, “As often was the case, John Madden asked if there was a way for him to use his telestrator to indicate how far a team had to go for a first down. Obviously, that couldn’t work as a graphic through the telestrator, but I asked Jerry to see what could be done. A year later and after Jerry had left Fox, he asked me if I was still interested in that first-down marker. Of course, I said yes, but then he told me the cost. We were in the middle of recession doing six games a week so we had to pass. A year later, the economy had bounced back a bit, and the rest is history.”

Gepner’s career stretches well beyond those two things, but those are two new elements that had incredible effects on the sports broadcasting world. And that makes his induction here well worth celebrating.