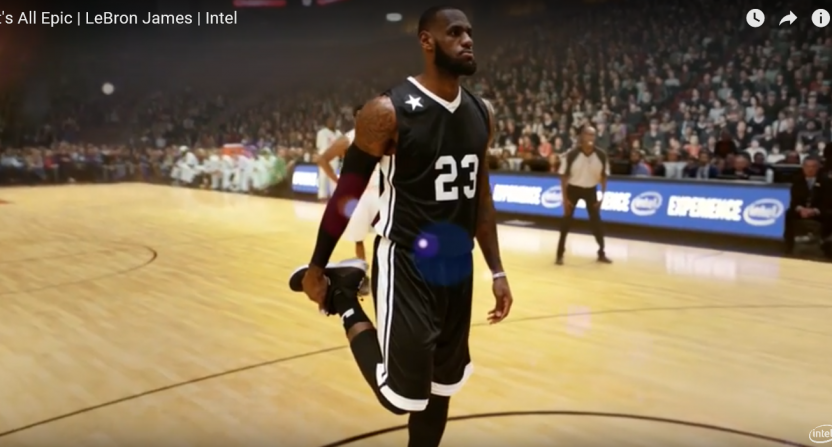 Technology is certainly having a substantial impact on how fans consume sports, and Intel is hoping its 360-degree replay technology will prove to be one of the next big advances. The company released two ads with NBA star LeBron James Thursday to promote that tech, which will be utilized in this weekend’s NCAA Final Four and championship men’s basketball games.

Here’s the first ad, which involves James sinking a three-pointer. “Overwhelmed with emotion, James’ face morphs into a teary baby face as Intel’s 360 replay technology catches views of it from every angle, as fans cheer in the background.”

And here’s one using 360 replay technology on a James quad stretch, complete with the announcer saying “What I wouldn’t do to be that quad…”

Intel also released the results of a nationally representative survey they commissioned from Turnkey Intelligence, which surveyed 493 college basketball fans across the U.S. earlier this month. The most interesting result there was the importance viewers placed on tech; 63 per cent said more technology would further improve the viewing experience, 89 percent who have checked out a VR broadcast rated it as positive, 80 percent said they’d pay $10 to watch the championship game in VR from a front-row perspective, and 90 percent said VR and 360-degree replays improve the viewing experience.

Of course, this should be taken with a grain of salt; it’s an Intel-sponsored survey, and one with less than 500 people (and the people who participated were already college basketball fans, so this isn’t about the general populace). Still, it is interesting to see respondents not just talk up tech, but say they’d pay more for premium VR broadcasts.

For now, those interested in VR can check it out for free with the Turner-managed 2017 NCAA March Madness Live VR app (which is powered by Intel’s TrueVR tech), and those interested in the 360-degree replays can catch them during the Final Four and championship games. We’ll see if those elements become bigger features of broadcasts going forward.