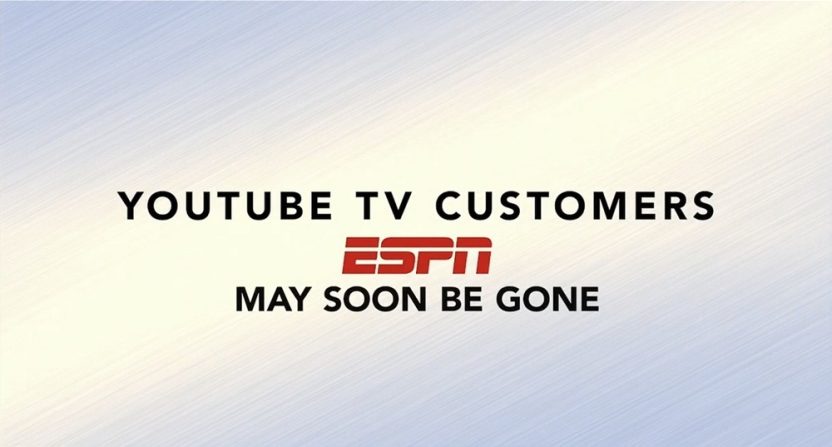 On December 13, we learned that a carriage dispute between YouTube TV and Disney could lead to the streaming service pulling all Disney-owned networks down by December 17 if a deal was not reached.

December 17 has come and gone and YouTube TV made good on their threat and has pulled all Disney-owned networks off their service, including ESPN, ESPN2, ESPNU, ESPNEWS, and SEC Network, not to mention all local ABC channels.

We know how frustrating it is to lose channels like ESPN and your local ABC station, and will continue conversations with Disney in hopes of restoring their content for you. For the full list of removed Disney-owned channels and live updates, check out https://t.co/R7MzaOMBNF

YouTube TV announced that while Disney content remains off their platform, they will be decreasing their price by $15/month for their Base Plan, from $64.99 to $49.99. That may or may not imply that they expect this situation to go on for more than just a few days.

The company also created a page on their website for updates about the dispute, which currently includes an in-depth description of how we got here from their perspective.

We’ve held good faith negotiations with Disney for several months.  Unfortunately, despite our best efforts, we were unable to reach an equitable agreement before our existing one expired.

As of December 17, 2021, end of day Eastern Time, all Disney-owned channels, including ESPN and your local ABC station, are unavailable on YouTube TV. Members will not be able to watch live or local content from Disney and will also lose access to any previous Library recordings from these channels, including 4K content that is available as part of the 4K Plus add-on.

We will be decreasing our monthly price by $15, from $64.99 to $49.99, for the Base Plan while this content remains off of our platform. No action is needed on your part. A credit of $15 per month will automatically be issued. Once the content is unavailable, this credit will be applied to your next bill after December 17 and will only be visible to family managers in Settings > Billing after the charge has taken place. Please note that if you have a promotional price with YouTube TV, you can still expect a $15 credit. Members who are in a paused state will receive this credit one month after their first charge. Should we come to an agreement with Disney, we will adjust the price accordingly and will notify members via email beforehand.

We know this is frustrating news, and it is not the outcome we wanted. We will continue conversations with Disney to advocate on your behalf in hopes of restoring their content on YouTube TV.

Regardless of the offer, sports fans who subscribe to the service and were looking forward to the 17 bowl games that will be televised across ESPN, ESPN2, ESPNU, and ABC, not to mention all the other NBA, NHL, and NFL content they could miss out on, are not thrilled.

Damn they weren’t bluffing. No more ESPN on YouTube TV. Time to switch services I guess.

Bro, I’m not sure I’ve seen a solid company such as YTTV burn all their goodwill in a matter of mere minutes. This is amazing.

We are all such marks for cutting the cord. Everything comes back around and costs the same, and things happen like “oh there go all the sports channels at the very beginning of the best sports stretch of the year.” We have been bamboozled and utterly led astray

Hey @YouTubeTV, if you don't have a deal by Sunday, I'm out and never coming back. And I'm not the only one.

Of course, there are two sides to every carriage dispute and ESPN has been putting out commercials on their end as well, asking viewers to let YouTube TV know they won’t be happy if they can’t watch their sports programming. We’re guessing they’re hearing about it right about now.

Here we go again. ESPN ran a promo on Monday Night Countdown that it was in danger of being pulled from YouTube TV, then on the Bottom Line said the deadline was Friday at 11:59 pm ET. pic.twitter.com/WYdJ62PpFs

This isn’t the first time YouTube TV has threatened this kind of effort. They famously threatened to drop the then-Fox Sports now-Bally Sports RSNs in February 2020 but reached a temporary agreement a week later that lasted through the end of the 2020 MLB season. This past September, a carriage dispute between NBC and YouTube TV also carried similar threats but a new deal came together in the end.

The last time ESPN found themselves in a significant carriage dispute like this was two years ago when AT&T and Disney were nearing the end of their deal and ESPN bombarded DirecTV customers with ads during Monday Night Football. A deal was eventually done before any networks were dropped.

It’s a very bold move for YouTube TV to actually follow through and know that they’re likely to be perceived as the bad guys here with viewers who cut the cord with the hopes that they’d be able to save money and still get all the games they want. Now they’ll get to save money but at the cost of being able to watch any ESPN or ABC programming. That’s not the deal they signed up and we’ll have to see how many of them jump ship permanently to ensure they don’t have to deal with this again.

If a deal gets done this weekend, that’s one thing. But if there’s no ESPN, ESPN2, or ABC available for weeks, well, that’s another thing altogether.