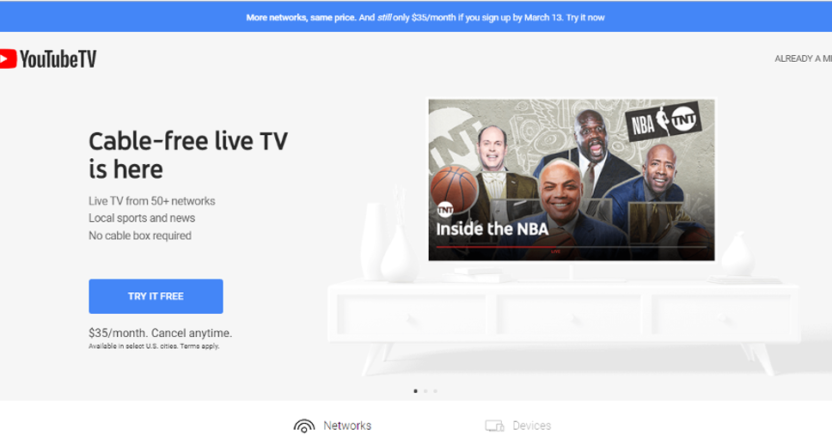 It looks like YouTube TV is set to offer more to sports fans and fans of Turner’s other programming, but that extra content will come at a price. Interestingly enough, though, the streaming service is applying that price hike (from $35 a month to $40 a month) not to existing customers, but only to those who sign up after March 13.

So, for the moment at least, current subscribers and new subscribers who get in before that deadline are going to get lots of further channels (including Turner channels like TBS, TNT, and NBA TV and more, plus MLB Network) without an extra fee. They’ll also have options to watch NBA League Pass or MLB.TV through YouTube TV.

Last year we launched YouTube TV, the best way to enjoy cable-free live TV, and we’ve been working hard to make it better every day. Today we are excited to wish all our members an extra Happy Valentine’s Day by bringing more of the networks you love to YouTube TV, including TNT, Adult Swim, TBS, CNN, Cartoon Network, truTV, Turner Classic Movies and more!

…For sports lovers in particular, we’ve got you covered: you now have access to March Madness and you can watch nationally televised NBA games, NBA All-Star weekend, NBA Playoff games, MLB Postseason games, the PGA Championship and soccer from the UEFA Champions League.

That announcement also mentions that YouTube TV is expanding to all top 100 U.S. markets (they’re currently in “over 80”), and will be available to over 85 per cent of U.S. households following that expansion. Some of the newest markets include Lexington, Dayton, Honolulu, Richmond, Mobile, and Syracuse. But what’s perhaps particularly interesting is how sports-focused this content expansion is.

Yes, the added Turner channels have lots of other programming (and some, like CNN and Cartoon Network, don’t show sports at all), but sports is a big focus here, and YouTube seems to be targeting sports fans with this release. That comes through further in comments YouTube TV director of content partnerships Heather Moosnick made to Reuters’ Jessica Toonkel, which also emphasized how advertising on sports broadcasts (including the World Series and the Super Bowl) has been the focus of YouTube TV’s promotion efforts thus far:

Google is betting that its strong sports offering will help win over more subscribers, Moosnick said.

“Sports is really one of the key offerings that a millennial would be willing to pay for a live TV service,” she said.

To that end, Google has targeted sports fans with its TV ads this year. Ninety-six percent of YouTube TV’s ads on television so far this year have appeared during sports programming, including the Super Bowl, according to iSpot.tv, which tracks TV ads.

When Google launched YouTube TV last April it was cautious with how much content it was offering so that it could keep the price low enough to entice cord cutters or people considering cutting the cord, Moosnick said.

At launch YouTube TV offered almost 50 channels in five markets. With these additions, YouTube TV will have almost 60 channels, and be in 100 markets, Moosnick said.

YouTube TV is doubling down on sports further with these additions, and trying to bring in yet more sports fans with how they’re focusing their marketing. And this expansion and price hike is particularly interesting, as it’s providing a deadline (March 13) to get in for the best deal.

There’s debate about the effectiveness of so called “early-bird” marketing campaigns (especially for crowdfunding efforts) that offer a deal by a certain time but raise the price afterwards, as while they can bring in more people, they often make people less willing to sign up afterwards if they miss that window. But limited-time promotions aren’t exactly uncommon in the TV world, and there’s some merit to doing this around a content expansion in particular.

Existing customers who don’t really care about the Turner channels or MLB Network don’t have to complain about their own rates rising, and new customers who want to get in before the price goes up can do so, but YouTube TV can then make back more of the per-subscriber fees they’re paying to these new channels off customers who sign up after the deadline.

We’ll see how this pans out for YouTube TV and where they go from here, but this is yet more evidence of how they’re particularly aiming to bring in more sports fans. It’s probably no surprise that this comes shortly before March Madness, which will have a lot of games on the Turner networks. And sports fans interested in YouTube TV now have further incentive to check it out.