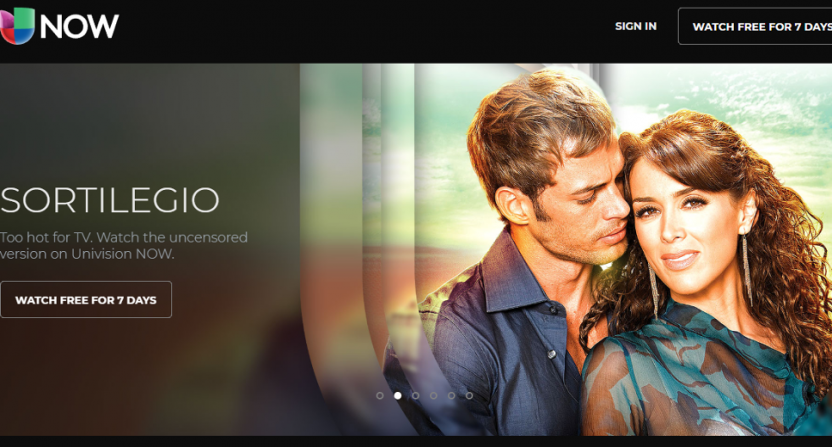 The latest carriage dispute has seen over 60 Univision owned-and-operated stations, plus associated cable channels Univision Deportes and Galavision, go dark on both Dish and Dish-owned streaming service Sling TV as of 7 p.m. Eastern Saturday. That affects about 13.1 million subscribers in total, and both sides are blaming the other (as usual), as per Variety‘s Cynthia Littleton:

The sides have been negotiating a new pact for weeks. Dish on Friday night declared the talks at an impasse.

“Given current events impacting the Hispanic community, we call on Univision to return its signal to DISH, DishLATINO and Sling TV customers as soon as possible. This is not the time to be making outrageous demands to make up for bad business decisions, or, as many have suggested, better position themselves for a sale,” said Alfredo Rodríguez Diaz-Marta, VP of DishLatino and Sling Latino.

Univision said Dish rejected its offer of a two-week contract extension to allow talks to continue without an interruption of service for Dish and Sling customers.

…“It is outrageous that Dish has rejected our offer of a two-week contract extension to allow its customers and our viewers to continue to have access to Univision’s highly rated networks and stations. While Dish has routinely used blackouts against broadcasters—its 68 broadcast blackouts since 2010 are significantly more than any other distributor in that time — Univision expected Dish to take our negotiations and its commitment to Hispanic consumers seriously when it told its customers this week that it wanted to ‘reach a mutually beneficial deal’ for Univision’s ‘high quality content,’ ” Univision said in a statement.

That’s a lot of the usual back-and-forth in these kinds of talks, and both sides have been known for aggressive behavior pricing disputes. Univision mentions Dish’s broadcast blackouts, but they’ve also been in lots of recent carriage disputes themselves, including with AT&T, Charter, and Verizon in the past two years. Dish argues that Univision ratings are dropping (and also offers customers alternative channels and/or free antennas in areas where Univision stations are available over the air) and that the price Univision wants is unfair, but Univision claims that they’re “prepared to continue negotiating” and that Dish is offering them “only a fraction of what it pays our English-language peers.”

But what’s particularly interesting here is the streaming side. As Jon Fingas notes at Engadget, Univision launched their own direct-to-consumer streaming service in May, charging $8 a month over-the-top for live and on-demand content (from both their channels and partners like the BBC and Viacom) or $3 a month for current pay-TV customers, and describing it as “Netflix for Spanish-language content.” And Dish’s statement particularly takes exception to Univision wanting them to pay more per-subscriber for this package than what the network is charging customers for its over-the-top service:

Univision also sells its top two networks direct to consumers through a streaming product called Univision Now. That product is available for $7.99 per month, yet the programmer is asking DishLATINO and Sling Latino subscribers to pay almost double for the same content.

That’s perhaps the larger and more widely applicable issue here. Selling content over the top is becoming a key strategy for many networks, from CBS All Access to ESPN+, but doing so can carry some challenges in carriage negotiations with traditional multichannel video programming distributors (MVPDs). And that’s part of why ESPN+ is primarily a supplemental offering (with no access to ESPN’s linear TV feeds) at this point; yes, ESPN could absolutely gain more subscribers if they offered a full over-the-top service, and they might yet do that at some point, but something like that would compete with their traditional offerings through MVPDs, and might cause some issues in carriage negotiations. Meanwhile, Sling TV’s involvement on the other side is significant; like many streaming services, it’s extremely focused on offering a lower price than traditional cable or satellite, and that can mean there isn’t a lot of wiggle room in negotiations.

While the Dish-Univision dispute is notable in its own right, it’s perhaps particularly worth watching for the streaming implications. If Dish winds up getting a deal closer to what they want here, and if the Univision Now service becomes a key part of the reason why, that could prove a cautionary tale that discourages other networks from offering a full over-the-top product outside of MVPDs. But if Univision winds up with more of what they want, that might encourage other networks to go over-the-top in larger ways, suggesting that they can have their traditional per-subscriber fee cake and eat it too. A lot may depend on how much pressure viewers exert on these companies, and on which side decides to crack first. In any case, the result here will certainly be interesting.