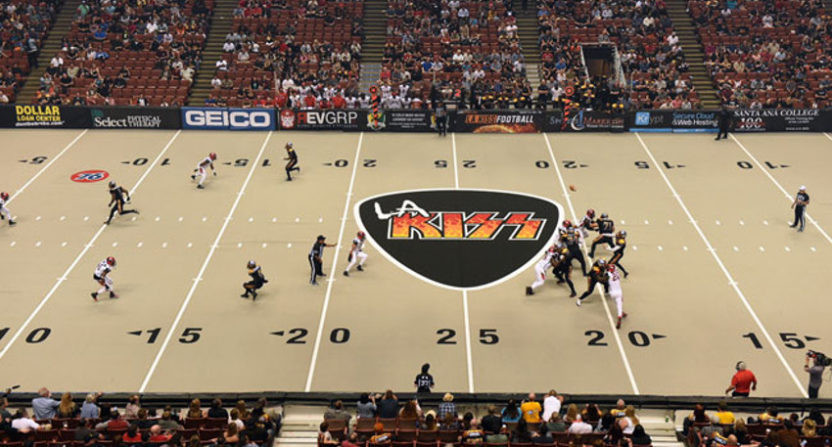 There may be only five Arena Football League teams left, but their games will get some extra coverage this year thanks to Twitter. The tech company struck a deal to stream the NFL’s Thursday Night Football games last year, but lost out to Amazon this time around, and that may have played a role in their new deal to stream some AFL action. They’ll air at least five games this year, part of their expanding portfotlio of streaming rights.

While the AFL draws nowhere close to the NFL’s audience, it is an established brand (and one with celebrity owners like Jon Bon Jovi, seen above). The league is in its 30th year, albeit with some bankruptcies and changes in that time, and it does play at a different time than the NFL. In fact, the AFL season is already in full swing; it started in April and runs through August. So there’s a good potential opportunity here for Twitter, as they’re broadcasting some football at a time when lots want to see it, and long before the NFL and college products become available. AFL broadcasts on Twitter probably won’t draw a huge audience, but they may well be worth whatever Twitter paid.

In a lot of ways, these kinds of deals may be just as important for tech companies as deals with the more marquee properties. Yes, the NFL will always draw a much bigger audience than leagues like the AFL, but the amount they want for their non-exclusive rights is much higher as well. The AFL probably isn’t charging too much for this, especially considering the benefits the added exposure has for them, and as long as the tech companies aren’t paying production costs, this may make sense for them.

This is also a great way for Twitter to enhance their streaming portfolio (helpful when negotiating deals with bigger leagues; they can show that they’ve done this). And it’s excellent exposure for the league in question. We’ll see how this goes, but presuming the rights weren’t too high, it seems to be something that makes sense for both sides. And it shows that there are opportunities for tech companies beyond the traditional powerhouse leagues, and opportunities for leagues beyond the traditional networks.