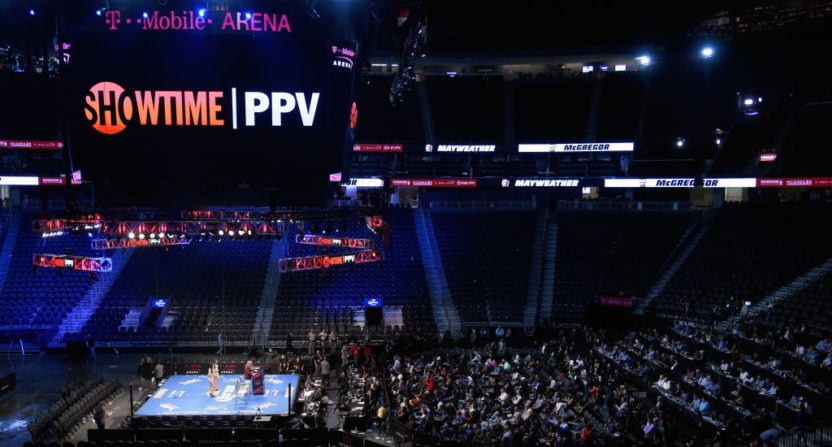 Saturday’s Floyd Mayweather-Conor McGregor fight was the first pay-per-view event Showtime had ever sold direct to consumers through their website and app, but some of the consumers who paid $99 for it claim it didn’t live up to the broadcaster’s promises, and they’re taking legal action as a result. As per Ashley Cullins of The Hollywood Reporter, one fight fan has filed a class-action lawsuit in federal court in Oregon over this:

Portland boxing fan Zack Bartel paid to stream the fight in high-definition through the Showtime app, but says all he saw was “grainy video, error screens, buffer events, and stalls.”

Bartel is suing Showtime for unlawful trade practices and unjust enrichment, alleging the network rushed its pay-per-view streaming service to the market without securing the bandwidth necessary to support the scores of cable-cutting fans.

“Instead of being upfront with consumers about its new, untested, underpowered service, defendant caused likelihood of confusion and misunderstanding as to the source and quality of the HD video consumers would see on fight night,” writes attorney Michael Fuller in the complaint filed late Saturday in Oregon federal court. “Defendant intentionally misrepresented the quality and grade of video consumers would see using its app, and knowingly failed to disclose that its system was defective with respect to the amount of bandwidth available, and that defendant’s service would materially fail to conform to the quality of HD video defendant promised.”

The full complaint THR obtained is available here, or below:

The complaint says Bartel had all the equipment required and yet was still unable to stream this event at the level Showtime said would be possible. It’s seeking actual damages or $200 in statutory damages, whichever is greater, for each member of the class. The proposed class includes “Oregon consumers who viewed Showtime’s app advertisement on iTunes and paid $99.99 to stream the fight, but were unable to view the fight live on the app in HD at 1080p resolution and at 60 frames per second, and who experienced ongoing grainy video, error screens, buffer events, and stalls instead.” Bartel’s claims are not yet proven in court, but they could pose a problem for Showtime depending on how this plays out.

And this may not be the only lawsuit we get over this fight. There were streaming issues in other states and from other providers, with UFC Fight Pass in particular having reported problems before the main event. It’s also notable that there were issues buying the PPV from traditional cable and satellite providers, too, with the likes of Dick Vitale prominently complaining, the start of the Mayweather-McGregor fight eventually delayed thanks to the technical difficulties.

It’s perhaps not surprising that some issues showed up given the incredible demand for this fight. Despite the delay and issues, Showtime officials told the Las Vegas Review-Journal that they expected to break the 4.6 million PPV buy record set by Mayweather’s fight against Manny Pacquiao back in 2015. And that’s even with an estimated close to three million people illegally streaming the fight, despite Showtime’s efforts to crack down on that. But this demand was definitely predictable and expected, and if Showtime’s actual stream is found not to live up to their marketing, that could be problematic for them. For what it’s worth, Pay-Per-View Live Events sent THR an email Monday directing angry customers to contact their service provider:

“Unfortunately, we are receiving a huge number of complaints from a large number of customers who are not using our services but a different provider (UFC),” says the message. “We can only express that we understand your pain for not being able to see the special event but again we are not the company that provided the stream or actual event. You will need to contact the actual provider such as Xfinity, Showtime, HBO, UFC.tv etc. to request your refund.”

So yeah, there might be some fallout from this for a while. We’ll see how this lawsuit plays out, and if others are filed.