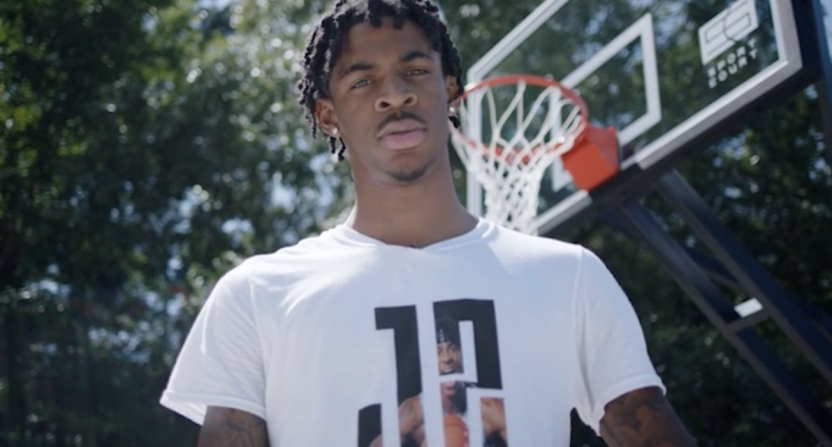 The Memphis Grizzlies earned the eighth seed in this season’s NBA Playoffs, beating the San Antonio Spurs in the play-in tournament to win the Western Conference’s final postseason bid. That provided an opportunity for a wider TV audience to watch the Grizzlies’ rising star Ja Morant.

Memphis shocked the top-seeded Utah Jazz in Game 1 of their first-round playoff series, but eventually lost in five games. However, those who want to see more of Morant have an opportunity to follow the high-flying guard off the court in a six-part docuseries for Crackle titled Promiseland. Part 2 of the series (comprised of Episodes 4 through 6) launched on June 17.

For those who see “six-part docuseries” and believe that’s too much of a commitment, each episode is no longer than a half-hour. (Two of them last 20 minutes.) Altogether, Promiseland runs two hours and 25 minutes. Regardless of whether you watch it in chunks or in one sitting, Morant is a phenomenal talent with an upbringing and support system that helped his ascent to the NBA and that story is compelling to watch.

Director Dexton Deboree (Unbanned: The Legend of AJ1) begins Morant’s story as he waits to be selected in the 2019 NBA Draft. As basketball fans know, Memphis selected him No. 2 overall out of Murray State, a mid-major school not typically known for producing NBA prospects. With No. 1 pick Zion Williamson battling injuries and limited to 24 games, Morant dazzled in a first season that resulted in him winning the NBA’s Rookie of the Year award.

But the documentary first goes back to chronicle Morant’s development, tutored by his father Tee. From the start, Deboree establishes that this isn’t a story we’ve become accustomed to seeing, with a promising talent emerging from a broken home or a father mercilessly coaching his son to achieve his potential. Tee Morant gave up his own bright basketball career to raise his son and if he intended to live his dreams vicariously through his son, he certainly doesn’t come across that way.

Tee and mother Jamie might be the true stars of the first part of Promiseland, realizing Ja’s potential and providing everything he needs to succeed. We see father coaching son on the court built in the backyard, with cones and chairs set up as obstacles. Blocking pads build strength and toughness. Tractor tires help develop explosiveness. Tee might be a tough coach, but he teaches with patience and thought. And Ja is an exceptional student who wants to get better, motivated by being overlooked.

My journey to becoming #1of12ndToNone…
PROMISELAND Part 1 out now on @Crackle_TV pic.twitter.com/IqXvqMcRe5

Deboree also doesn’t leave it to Morant to tell his own story. He’s too busy living the life and playing the game that makes him worthy of a documentary so early in his basketball career.

In addition to his parents, Murray State coach Matt McMahon, assistant Tim Kaine, and former assistant James Kane — who discovered Morant playing in an auxiliary gym and convinced the head coach to begin recruiting him — recall Morant’s impact on the Racers’ program. He became a big star in the small town of Murray, Kentucky. Fans at other schools came to watch him. And though Murray State has previously won the Ohio Valley Conference and gone to the NCAA Tournament, the Racers never had a soon-to-be NBA star like Morant.

Then the story follows Morant to the NBA, where he immediately makes fans take notice with his highlight dunks, speed, pinpoint passes, and shooting touch. Grizzlies coach Taylor Jenkins knows that Morant is a superstar talent and wants to help him improve. The influence of Tee Morant is apparent in how well Ja embraces coaching and shows his own intelligence and feel for the game in practice and on the court. Teammates Jaren Jackson and Brandon Clarke share how impressed they are by the rookie.

Deboree also shows a talent for pacing by ending Part 1 (or Episode 3) with the cliffhanger of the 2020-21 NBA season falling into uncertainty when Utah Jazz center Rudy Gobert tests positive for COVID-19, which prompts the sports world and society-at-large to shut down.

Part 2 (Episodes 4 through 6) chronicles a rookie season unlike any other with COVID-19 and player activism against racial injustice take over the NBA. Just as Morant is on the verge of becoming a star, he’s helping lead the Grizzlies toward playoff contention.

As NBA fans saw this season, Morant and the Grizzlies are on an upward trend. Memphis shocked the top-seeded Utah Jazz in Game 1 of their first-round playoff series, but eventually lost in five games. But making the playoffs was an important step for the Grizzlies as they build around Morant.

Promiseland shows how a young star emerges with the help of an amazing family and that Morant is a player worth rooting for and following as he develops into one of the NBA’s top players. It’s not a typical documentary that chronicles the rise and fall of an athlete or team, but shows what makes a particular player special.

You can currently watch all six episodes of Promiseland on Crackle.