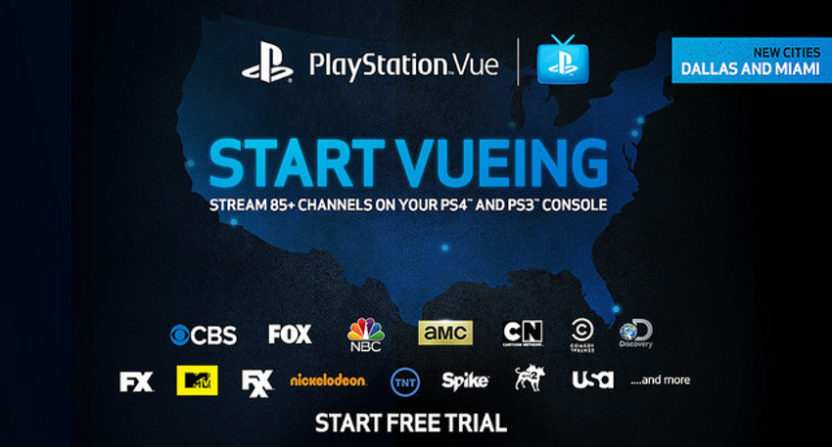 The push for streaming services to add local affiliates seems to be heating up, and Sony’s PlayStation Vue is making big moves on that front. They added 17 Fox affiliates in July, then seven further CBS affiliates last week, and now they’ve brought on lots of ABC and NBC affiliates. CordCutters News writes that PS Vue has added at least two Hearst TV-owned NBC affiliates and may eventually add all 12 the company has, and has added 15 E.W. Scripps-owned ABC affiliates, plus three ABC affiliates and one NBC affiliate owned by Cox Media Group. However, the additions seem to be still somewhat in process:

Some readers are telling us new stations are showing up on mobile first but not yet showing on streaming players. It looks like we caught this before Sony finished the full roll out that could easily take 24 hours or more.

There are some notable markets in these latest lists of additions, including Scripps affiliates in Tampa-St. Petersburg (11th in market size), Phoenix (12th), Denver (17th), Cleveland (19th), and Indianapolis (27th), Hearst affiliates in Orlando (18th) and Baltimore (26th), and Cox affiliates in Atlanta (10th), Orlando (18th), Charlotte (22nd) and Pittsburgh (23rd). So, this is an extra push to help the PS Vue service gain traction in those areas. Striking deals with local affiliates can be complicated and time-consuming, but it’s definitely important for streaming services, and being without those affiliates can put you at a competitive disadvantage. We even saw DirecTV Now finally strike a deal with CBS recently.

A challenge with doing this is that there are so many different conglomerates that own local affiliates, though, necessitating a bit of a patchwork approach here. And with so many streaming services out there, there are lots of different deals to be done. That’s part of why there are still many affiliates not on one or more of the new streaming services. But adding local affiliates is a clear priority for services like PlayStation Vue, and they’re making a big push here, one that may make their service an easier sell in many markets. We’ll see where they go next.