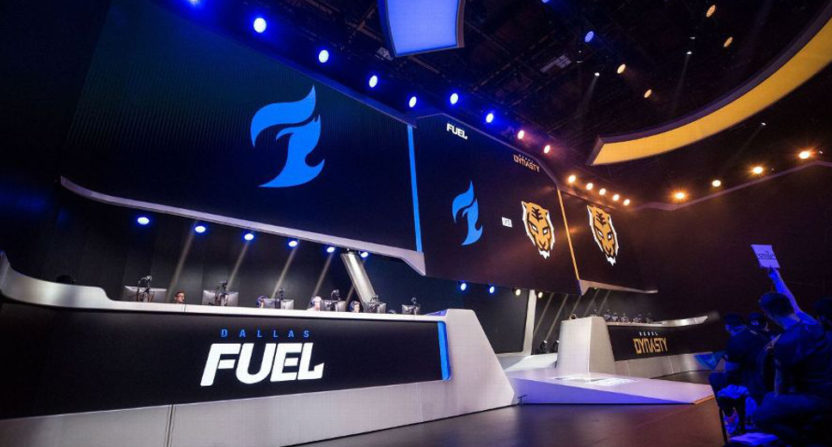 Blizzard announced the numbers Wednesday for its opening week of Overwatch League streams, and they’re impressive. Those competitions were broadcast across six platforms: Twitch (the first event there under a two-year deal reportedly worth at least $90 million), Blizzard’s Major League Gaming service, the Overwatch League’s own website, and Chinese platforms ZhanQi TV, NetEase CC, and Panda TV. They say they drew a per-minute audience of 408,000 for the opening day and 280,000 for the week, with over 10 million viewers tuning in at some point and a peak audience of 437,000 watching on Twitch and MLG alone for the Dallas Fuel and Seoul Dynasty match (seen above) on the opening day.

How do those numbers stack up to other big sports streaming broadcasts? Well, the key one to consider is Amazon’s streaming of Thursday Night Football, probably the largest regular streaming sports broadcast out there. As ESPN’s Jacob Wolf noted, the Overwatch League opening day per-minute audience is greater than Amazon’s TNF audience per 30 seconds for its opener (372,000 in September). It’s also greater than the subsequent 391,000 per 30 seconds Amazon posted in Week 2, or the 310,000 they averaged per minute for the season. But there are a whole lot of reasons why those broadcasts aren’t exactly equal. (By the way, it should be noted that Amazon owns Twitch, so they’re benefiting on both sides here.)

First, Amazon was far from the only platform showing TNF. Those 18 games were all broadcast on NFL Network, with 10 of them on CBS and NBC (five each as well). And they were streamed through a multitude of non-Amazon sources, as AA’s Ken Fang noted in October with reference to the Week 2 Bears-Packers game (391,000 viewers per 30 seconds on Amazon):

In addition, Amazon received the biggest audience of those watching online. Other platforms that streamed the game included the NFL Mobile app for Verizon Wireless subscribers, Watch NFL Network, NFL app on Microsoft Windows, NFL Game Pass and the CBS All Access app. Overall, the combined average online audience was 525,000, so most of the online viewership was through Amazon.

So, even if you discount the TV viewership (which itself is huge: TNF took second and fourth place in primetime this year on CBS and NBC respectively, with both averaging over 14 million viewers), the combined online audience for TNF beat the audience for even Overwatch League’s first day, and just the Amazon average audience overall beat the Overwatch League audience when the whole opening week was considered.

Next, there’s the restriction on who can access Amazon’s TNF broadcasts. Those are for Amazon Prime members only, which is likely a smart move on Amazon’s part to help promote that yearly subscription service. But that does limit the potential viewing audience. And shared Prime benefits can apply to things like free shipping, but don’t apply to Prime Video, so those who share a Prime account with someone else weren’t able to watch TNF on Amazon. Yes, Amazon offers free trials of Prime, so those particularly interested in a TNF game could easily have signed up, watched it and then cancelled. But there are more access hurdles to watching TNF on Amazon than Overwatch League on Twitch. Twitch has the Twitch Prime ad-free option that you can pay extra for, but anyone can watch any stream for free. And it’s worth noting that Amazon’s goal with Twitch streams may be maximizing viewership, but their goal with NFL streams is maximizing Prime membership. So it’s not like this Twitch-Overwatch League deal is necessarily more valuable than TNF; they’re different products doing different things.

It’s also worth noting that Overwatch League is a new, fancy setup that’s a pretty premium esports franchise, featuring a highly-popular game, top competitors, and a whole lot of financial backing. So this is some of the most in-demand esports content out there, as those streaming numbers show. TNF, on the other hand, is a long way from premium NFL content; it generally features the worst primetime matchups the NFL displays (especially with ESPN’s Monday Night Football getting a slight schedule boost this year), and is regularly complained about by players, viewers and now even TV executives. And it’s still highly in-demand, as those above numbers show. But this isn’t close to the best product the NFL has to offer.

So, are these Overwatch League numbers notable? Absolutely. Any online broadcast averaging 408,000 per minute (opening day) or 280,000 per minute (the whole week) is significant. Of course, these streaming numbers are global (as they are for Amazon’s TNF broadcasts),  so they’re not really comparable to U.S. TV numbers, but that’s still a good chunk of audience. And this does suggest that there’s a big audience for particular esports broadcasts, especially in digital realms like Twitch, and that streaming esports broadcasts can provide somewhat-comparable audiences to the streaming numbers for more traditional sports (disregarding the people watching those sports on TV). But overall, Overwatch League broadcasts in particular and esports broadcasts in general aren’t exactly knocking the NFL off its perch at the top of the sports market any time soon.