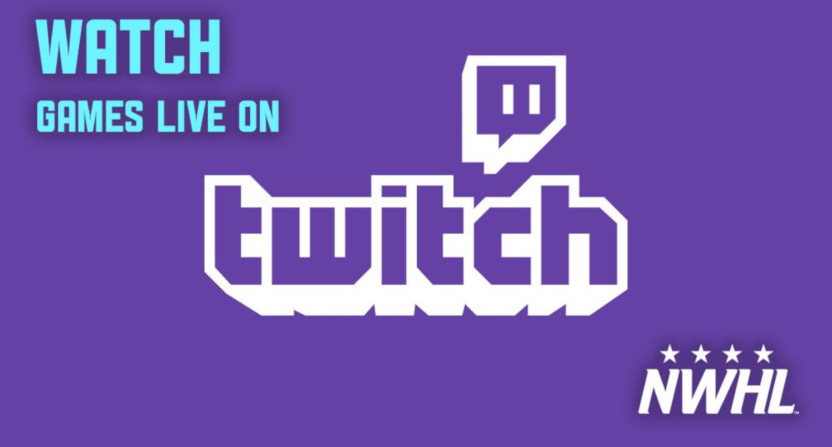 The National Women’s Hockey League has signed its first broadcast deal that will see it get a rights fee, and it’s with streaming platform Twitch. Jared Clinton of The Hockey News writes that the three-year deal made official Thursday will cover every game of the 2019-20 season and the playoffs, plus special events, and that the (unspecified) revenue involved ” will be split down the middle and shared with the players.” The partnership is also expected to involve engagement efforts, with players, broadcasters and other “NWHL influencers” taking part in some live chats on the service.

Here are some quotes from the NWHL release:

“With its accessible players and devoted fans, the NWHL is a perfect fit for Twitch in our global efforts to grow our traditional sports verticals,” said Jane Weedon, Head of New Verticals at Twitch. “We are proud to partner with the league in its mission to build the professional women’s hockey league the athletes and fans deserve.”

…“The official announcement of our partnership with Twitch makes this a historic day for the NWHL, our players, fans and everyone who supports the advancement of women’s hockey,” said NWHL Commissioner Dani Rylan, who started the league in 2015. “The live broadcasts of every single NWHL game on Twitch will allow us to both foster and grow our current community while introducing professional hockey to a new audience for the first time. Twitch’s platform also provides our fans and players the unique opportunity to collaborate on the viewing experience.”

…“I am extremely proud that the innovators at Twitch are moving forward alongside us,” said NWHL Players’ Association executive director Anya Battaglino. “This is a huge step for women’s hockey. Getting visibility on professional women’s hockey has been extremely important. The more eyes on the women’s game, the more fans we convert. Women’s hockey is at a monumental time right now, and the more we can showcase this product, the stronger our foundation becomes. The NWHLPA is excited to have our players highlighted around the world, and for fans of the game to have an even deeper access to us.”

While some NWHL fans may have hoped for a TV deal rather than a streaming-only deal, this deal probably makes a fair bit of sense for the league. There’s always a tradeoff between broadcast accessibility and payments to leagues (consider the premium Disney pays to put NFL games on ESPN rather than ABC, or the money ACC schools will make from their new network, or the money the Big 12 is getting from selling games to ESPN+), and streaming services are where some of the money is right now (consider MLB deals with Facebook and YouTube). And a rights fee, even if it isn’t a large one, is important for a league; it illustrates that your content has value, and it brings in some revenue.

With the NWHL under criticism and boycotts from groups like the Professional Women’s Hockey Players Association, which is organizing its own “Dream Gap Tour” this fall, it would seem very useful for the league to be able to say that it has a multi-year broadcast deal, that all of its games will be viewable, and that there will be at least some broadcast revenue heading to players. It’s also worth noting that these broadcasts will be free to viewers, which helps on the accessibility side. There’s an argument in favor of the league being able to say “Anyone can watch for free, you just have to figure out how to use Twitch” rather than signing on with a more well-known sports service like ESPN+ that comes with a paywall. (And, of course, we don’t know that the NWHL received offers from the likes of ESPN+, or from conventional TV. And a conventional TV deal, if there was even one out there, probably would not have included all games; a huge advantage of streaming platforms is that they’re not restricted by timeslots or by the channel’s other commitments.)

However, there are questions about just how well Twitch will work as a platform for NWHL broadcasts. While the platform says it has over 15 million daily active users and over 56 million downloads of its app, it’s primarily known for its streams of video game content at the moment.  Of course, Twitch is expanding beyond that, with RPG and tabletop game streams becoming a big part of the platform recently, and they’ve been diving into sports over the past few years, including deals with the NFL (Thursday Night Football games are streamed on Twitch as well as parent company Amazon’s other platforms) the NBA’s G League, and USA Basketball. But it shouldn’t be expected that Twitch’s existing userbase will suddenly become NWHL fans, or that existing NWHL fans will all have an easy time figuring out how to watch games on Twitch. (For the record, this Lifewire piece has a listing of some ways to do that; there are plenty of connected-TV devices that have official Twitch apps, but workarounds are needed for some platforms like Roku, though.)

Still, with all that said, this seems like a logical move for both the NWHL and for Twitch. Twitch gets to add to its sports portfolio and bring in some people who weren’t using the platform already, while the NWHL gets a home for all its games, a rights fee, and the opportunity to use some of those engagement features Twitch boasts. And the NWHL’s games will be available to fans for free, and available on a consistent platform (they’d previously had some streams on YouTube, Facebook and Twitter, but it wasn’t consistent what was where). We’ll see how the partnership works out over this three years span, but it’s one that seemingly makes some sense.