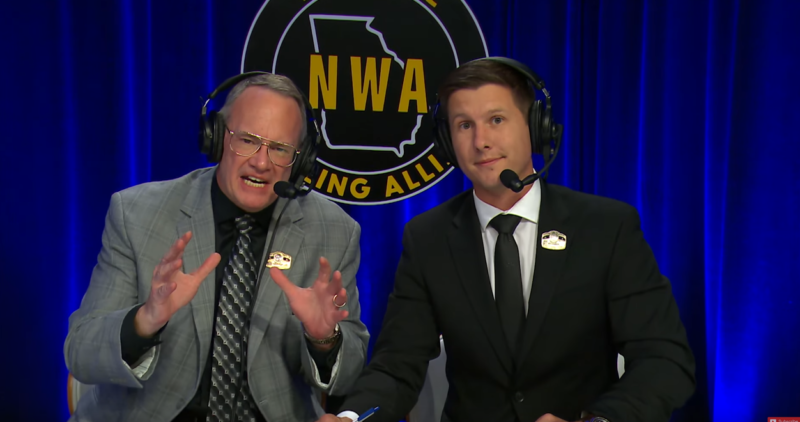 There are a lot of wrestling shows out there each week, including WWE Raw on USA Mondays, AEW Dynamite on TNT Wednesdays, WWE NXT on USA Wednesdays, and WWE Smackdown on Fox Fridays. But it’s a more obscure one released on Tuesdays that’s getting attention now, and not for the best reasons. The show in question is NWA Power (stylized as NWA Powerrr) from the Billy Corgan-owned National Wrestling Alliance, and it airs pre-taped broadcasts weekly on the NWA’s YouTube and Facebook pages. Well, the broadcast aired today featured commentator Jim Cornette (seen at left above alongside fellow commentator Joe Galli, the 58-year-old Cornette is a long-time wrestling manager, agent and commentator across a range of promotions, including WWF/WWE from 1993-2005) making quite the remark about wrestler Trevor Murdoch, fried chicken, and Ethiopia (which has had many significant nationwide famines):

“Trevor Murdoc is the only person I know who can strap a bucket of fried chicken on his back and ride across Ethiopia” Jim Cornette tonight lol ??‍♂️??‍♂️ #nwapowerrr pic.twitter.com/2SnJnb1cPD

That led to a lot of backlash, and to NWA Power pulling the show to “correct this error,” with NWA vice president David Lagana offering this comment:

On tonight's episode of NWA Powerr airing on November 19th 2019, one of our talents made comments which some viewers found offensive. We deeply regret the error and apologize.

We have temporarily taken the program down while we correct this error.

As WrestleTalk points out, Lagana also recently apologized for Cornette’s comments on suicide back on Nov. 1. So it’s been a good month there. And Cornette’s remarks that aired Tuesday took a giant amount of criticism, with a lot of that focusing on how easy it would have been to pull this from a show like this that’s pre-taped:

Since Cornette has been on #NWAPowerrr:

1. Mocking suicide
2. Claiming Emi Sakura (Japanese) is a fat Margaret Cho (Korean) [Pushing a bigoted all Asians look a like trope]
3. The Justin Roberts looks like he’s a pedophile because he smiles and wears a suit at work…

NWA Powerrr intentionally leaving in Cornette's racist joke is really sleazy dogwhistle shit. They air it, get a ton of attention from rightfully angry viewers, take it down and apologize, then get on the radars of "free speech" racists who have a new wrestling company to support

It’s not just the fact it was said.

It’s that it made it past any quality control. ?

No matter how much venom he spews about what “ruins wrestling”; alienating anyone SUPPORTING the art with such words does just that.

Whatever Cornette wishes wrestling was: That ain’t for me.

HOLY SHIT. Cornette's line about Ethiopia and fried chicken is fuckin astounding. I cannot believe it made it through edits of a taped show.

Feels like NWA at this point needs a dry erase board sign that says "___ days since Jim Cornette said something horrible".

I can’t believe Jim Cornette and NWA are somehow still around/back, but I CAN believe Cornette is a racist dipshit

There was also some criticism of previous tweets from Lagana:

Jim Cornette says some wild racist bullshit and David Lagana issues a bullshit statement. Here is why I don't believe a single word Lagana says about apologies and errors regarding Cornette's comments. pic.twitter.com/nv1P0J10Cy

It’s pretty rare to see something that was edited before air later pulled thanks to criticism, but there’s certainly a giant amount of backlash here. And the taped/edited part of this is definitely notable; this isn’t a case like the Sportsnet/Don Cherry one where live remarks prompted an apology and an eventual firing from a company, they’re remarks that the company was fine with ahead of time and only pulled after they took criticism for them. So this is an “error” they could have corrected ahead of time, but chose not to. We’ll see if anything further comes of this.