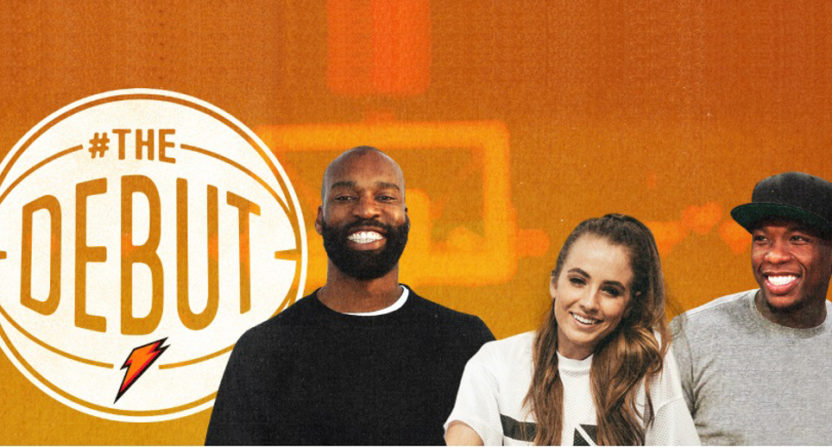 Twitter’s been getting into all sorts of sports content, from streaming college sports to NASCAR to MLB, golf, arena football and the WNBA to partnering with leagues like the NFL and NBA for studio content to forming partnerships to stream third-party studio shows like The MMA Hour to creating bots for scores and highlights. And their latest push is into high school sports, where they’re teaming up with Gatorade and Intersport for eight broadcasts of top high school matchups at live.twitter.com/TheDebut and @Gatorade.  The first one is Friday night with Spartanburg Day School vs. Shannon Forest Christian at 7 p.m. Eastern.

And there’s an interesting commentary team attached to these broadcasts: NBA 2K TV host Rachel Demita and former NBA players Baron Davis and Nate Robinson, with the commentators on-location for each game. Demita will call all eight games, while Robinson will be at five and Davis will be at four. Here’s a video promoting the series:

Welcome to the #TheDebut.
The best high school basketball games.
The nation’s top prospects.
All live on Twitter, Jan-Feb 2018. pic.twitter.com/V7QCpcvMRr

The Q+A section of an Intersport release sent out this week says there are going to be plenty of unconventional elements in the broadcast, too:

What will the broadcast look like visually from a consumer perspective?

This partnership will get the same treatment as other Twitter live stream experiences such as WNBA.twitter.com; live.twitter.com/ESPN. The broadcast will be on-par with linear TV in terms of production value but deliberately digital in nature by integrating tweets, player twitter handles, and engaging with fans throughout the broadcast in a way that’s differentiated with what would be expected from a basketball game on a TV network.

What camera angle will it be? Shot similarly to a game seen on TV?

The broadcast will be on-par with linear TV in terms of production value, however, game coverage will feature unique camera angles that the audience is not accustomed to seeing live – including courtside angles, slam cams and player isos on both ends of the floor.

And the hosts are going to be interacting with the audience as they call the game, and displaying tweets on the broadcast stream:

The hosts, Rachel Demita, Baron Davis and/or Nate Robinson will be on-site at all eight games to provide live commentary and game coverage. Beyond the game itself, they will discuss current trending topics in basketball and join the conversation on featured prospects with an emphasis on strengths, weaknesses, impact at the next level and college commitment.

Will there be regular segments during the broadcasts?

Regular segments include: MVP of the game Twitter Poll, Play of the Game, halftime school feature stories and Player of the Game post-game interviews. Gatorade is also working on special guest interviews with pro basketball players.

Will the hosts be interacting via Twitter during broadcasts?

Yes, the hosts will be posting via Twitter during the broadcast allowing fans to engage in real time. Prominent tweets from the live conversation will be pulled and shown on screen during the live stream.

Why high school basketball? Well, it’s a natural fit for Intersport, which owns and operates the Under Armour All-America High School Football Game, the Under Armour All-America Camp Series (football) and the American Family Insurance High School Slam (basketball). For Gatorade, they’re looking to connect further with high school athletes. And for Twitter, they’re looking for content that’s going to create discussion, and games with prominent college prospects seem to have a good chance to do that.

Intersport vice president of content strategy and distribution Jason Bernstein, Gatorade head of consumer engagement Kenny Mitchell and Twitter head of sports broadcast partnerships (U.S.) Andrew Barge all spoke to AdWeek’s David Cohen about why this alliance works for them:

Bernstein said his company has a “significant history” with live event and television production for high school basketball and football, and the idea for #TheDebut emerged from “Intersport and Twitter riffing on ways that we could bring fans closer to action.”

…Bernstein added that #TheDebut is being produced specifically for Twitter, and the combination of the livestreamed games and the dialog on the social network represent a “holistic approach to modern-day consumption,” bringing together fans’ appetite for video with their desire to remain connected in real-time.

…“Conversation around high school basketball is very popular among teen competitive athletes on Twitter, and with this partnership, we’re able to offer that audience a unique opportunity to watch top-tier high school prospects when they otherwise might not have had the chance to,” said Mitchell. “Gatorade is always looking for ways to connect with the teen athlete in new and innovative ways, and we think this partnership gives us that opportunity.”

We’ll see how this all works out, especially from the standpoint of just how much interest there will be in these games and how the plans to integrate Twitter commentary will go. (And hopefully no one commits any recruiting violations along the way.) But there are definitely some notable figures involved in this, and all the companies seem to be betting pretty heavily on it. And they’re putting significant resources into it, from the on-site (and decently high-profile) commentators to the unique camera angles and focus on an interactive broadcast. It will be interesting to keep an eye on, at the least.