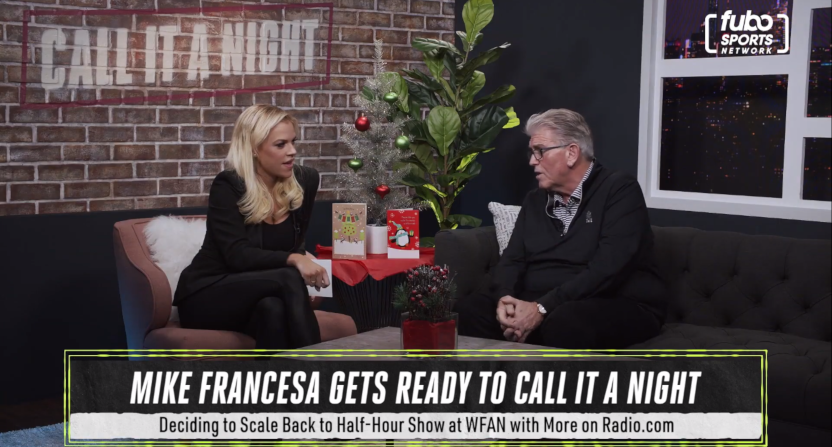 At least when it comes to his upcoming Radio.com show, Mike Francesa will not be sticking to sports. Francesa recently went on fubo Sports Network‘s Call It A Night to talk to host Julie Stewart-Binks about what’s next for him after leaving his WFAN afternoon drive show (again). That will include him doing a half-hour daily show (6 to 6:30 p.m. ET) on WFAN and a previous hour (5 to 6 p.m. ET) on parent company Entercom’s Radio.com platform. The full Call It A Night episode with Francesa airs on fubosportsnetwork.com (plus their fuboTV service, and smart TV and Roku Channel options) Tuesday at 7 p.m. ET/PT, but the network sent out some clips in advance, and one particularly notable one has Francesa talking about the formats of his upcoming shows.

He starts by discussing how the new WFAN show will be fast-paced, featuring short interviews, limited calls, and limited commercials (five minutes out of 30 instead of the eight WFAN would normally put there), but this gets even more interesting when Stewart-Binks asks him about the Radio.com show (at the 1:07 mark):

Stewart-Binks asks “Okay, Radio.com, you’re going to be doing two-thirds sports, one-third politics…” and Francesa responds “No, I do whatever I want any day. I could do all politics one day.” Stewart-Binks then asks “Okay, how come politics?” and Francesa replies “A., I have a fascination with it. There’s not a show, there’s no political coverage anywhere that is unbiased, it’s all biased. It’s either left or right. It is so significantly left or right. Give me a network, I’ll tell you; Fox is right, MSNBC is left. Everybody has a bias. Everybody is one or the other, most of the left, there are some rights. There’s nothing down the middle.”

Francesa’s lament about polarization of news is something that a lot of people have uttered, but as with sports coverage, claiming that anyone or any outlet is completely “unbiased” carries some challenges; it’s extremely difficult to produce anything that doesn’t reflect its creator in some way. And Francesa’s past history doesn’t exactly suggest he’s as “down the middle” as he might claim; Francesa stumped for Donald Trump on the WFAN airwaves as early as May 2016, and has sent plenty of pro-Trump tweets (including May’s “Here is the bottom line on President Trump. He may have lost money in private business, but he was able to win the biggest prize of all” and July’s “Mueller hearing is a complete waste of time. Illustrates just how partisan and ineffective government is now. The proceedings are painful to watch.”

So, you know, that isn’t exactly a view from nowhere. (However, we do not know Francesa’s stance on if pandas are aggressive and sex-crazed.) We’ll see how this “down the middle” approach turns out when Francesa starts up his Radio.com show, and we’ll see how much interest there is in him talking politics as well as sports. It will also be interesting to see what Francesa does with the new half-hour on WFAN, and how Joe Benigno and Evan Roberts will do as his drive-time replacements (that’s not official yet, but has been reported, and Francesa told Stewart-Binks “”They deserve the chance, so I think it’s right that they got the show”). His full conversation with Stewart-Binks touches on a wide variety of other topics, and can be seen on fubo Sports Network Tuesday at 7 p.m. ET and PT.