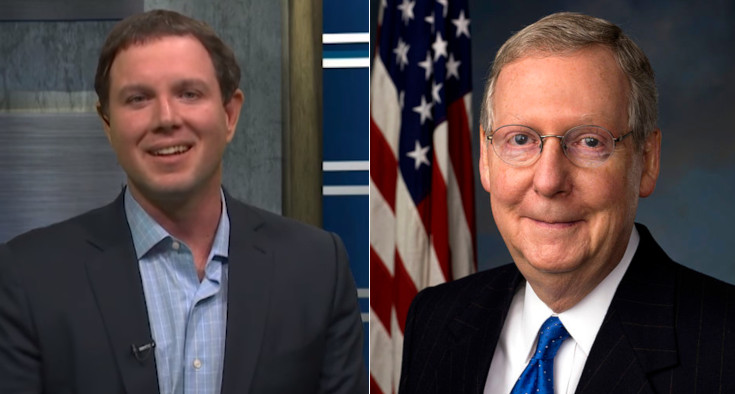 There’s an interesting new incursion of politics into the sports world. Matt Jones (seen at left above), known for his Kentucky Sports Radio show (and the accompanying Twitter handle and website), is taking time off from that show after Republican Kentucky senator and Senate Majority Leader Mitch McConnell (seen at right above) filed a complaint against him with the Federal Election Commission. Jones has said he’s considering running for the Democratic nomination to challenge McConnell in next November’s election, but has not yet officially filed to do so. (He also considered running for Congress in 2016, but chose not to in the end.) Jones posted on Twitter and on his website Wednesday that he’s now taking time off from his show at the request of iHeartRadio, but that he’s not happy with McConnell’s complaint:

Nice to be on the blog again, although unfortunately it is for this reason. Due to the Mitch McConnell complaint filed this morning with the FEC against me, iHeart Radio has asked that I not be on the show in the upcoming days. The complaint is absolute nonsense and very disappointing from someone as powerful as McConnell. I have said repeatedly in public and in filings with the FEC that I am not yet a candidate and I haven’t used the show to raise money or talk about my Exploratory Committee in any way. Nevertheless Senator McConnell has complained that having me on air is unfair and the man who speaks often about the importance of free speech and the exchange of public ideas has decided to cut off mine.

I understand iHeart Radio’s decision and don’t blame them. Since I will be making a decision on whether to run very soon, fighting this battle with the Senate Majority leader doesn’t make sense. I get it and still value my relationship with them. If I choose in the coming days not to run, I hope to extend my deal with iHeart Radio and continue KSR into the future.

For the time being however, I won’t be on the show. I had hoped to do the show for a couple more weeks, make my decision and then take time off to finish my book and regroup after a long process. Thanks to Senator McConnell that time will apparently start now. One would think that a man who has at his disposal all the media outlets in America, an unending supply of corporate donations and all the platforms a person could ever need would not be frightened of a sports radio show in Kentucky. Alas, I guess that is not correct. I am disappointed but still love KSR and know that my co-hosts will keep it entertaining for everyone.

Until the next time, Go Cats!

What exactly are the rules on TV or radio hosts becoming political candidates? David Oxenford covered this on The Broadcast Law Blog back in 2010, specifically on how it relates to “equal time” obligations. The key part of that commentary is here (emphasis his):

Once a candidate becomes “legally qualified” (i.e. he or she has established their right to a place on the ballot by filing the necessary papers), equal opportunities rights are available to the opposing candidates.  What this means is that, if the on-air broadcaster who is running for political office stays on the air, any opposing candidate can come to the station and demand equal opportunities within seven days of the date on which the on-air announcer/candidate was on the air, and the opponent would be entitled to the same amount of time in which they can broadcast a political message, to be run in the same general time period as the station employee/candidate was on the air.  So if your meteorologist decides to run for the city council, and he appears on the 6 o’clock news for 3 minutes each night doing the weather, an opposing city council candidate can get up to 21 minutes of time (3 minutes for each of the last 7 days), and that opposing candidate does not need to read the weather, but can do a full political message.

As Oxenford goes on to note, even that isn’t enough of a hindrance to stop all on-air personalities from running for office. In many smaller races, people have successfully ran for office while maintaining their on-air roles, with opponents not opting to throw in those equal-time challenges. And there are also exceptions for “bona fide news” so those who host interview programs, including even the likes of Howard Stern and Don Imus, can book running candidates without worrying about “equal time” (and Bill Simmons damn well could have booked Barack Obama if ESPN had let him), which has also led to things like sitting president Obama showing up on a Columbus sports radio show in 2012. But by and large, most officially-declared candidates seem to leave their on-air roles for the duration of the election at least (there’s enough else to do, and we’ve seen this with the likes of Craig James). The equal opportunities part sure seems to only apply once a candidate actually files, though, and Jones hasn’t yet done that.

It’s somewhat understandable why iHeartRadio wants to avoid potential controversy here, especially with McConnell already filing a complaint. McConnell is the Senate Majority Leader, after all, one of the most powerful people in the U.S. federal government. And if he wants to worry about a sports radio host who hasn’t even officially filed to run against him yet (unlike the five already-declared people already running for the Democratic nomination), that’s his prerogative.

There is some past history here, too, as Jones did a 20-minute in-person interview with McConnell challenger Alison Lundergan Grimes on his radio show, followed by McConnell calling in unannounced soon afterwards for an interview described as “emotional and combative.” And in August, Jones lost his job as a host on nightly show Hey Kentucky! on NBC’s TV affiliate in Lexington after announcing he was writing the Mitch, Please book on McConnell. So that may play into why McConnell cares about Jones. But it’s also understandable why Jones isn’t thrilled about having to leave his radio job earlier than he expected, especially considering that he hasn’t even yet decided he’s going to run.