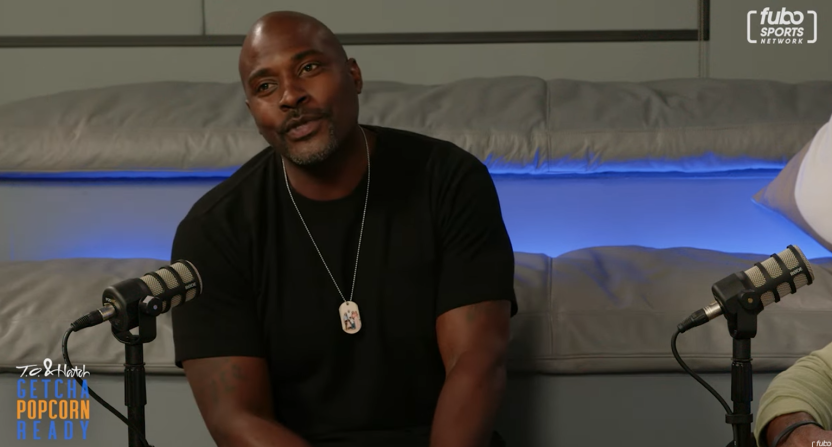 One notable change with Fox Sports’ FS1 lineup this fall came at the show formerly known as Speak For Yourself. Marcellus Wiley had been co-hosting there since moving over from ESPN in 2018 (and replacing Colin Cowherd on that show), working alongside Jason Whitlock and then Emmanuel Acho (since June 2020), but he wasn’t on the fall lineup. Instead, LeSean McCoy slotted in alongside Acho and Joy Taylor on the newly-dubbed Speak.

At the time, Wiley gave some interviews about the move, particularly to Brian Noe of Barrett Sports Media. That interview maybe stood out most for Wiley’s comments on his former SportsNation co-host Michelle Beadle. But he also talked a bit there about how Speak For Yourself had changed from what Whitlock had initially pitched him on, and how his agent Nick Khan had also moved on (to become president and now co-CEO of WWE), but not before giving him some “swing for the fences” advice. And particularly, he said the show was going in a direction opposite of what he wanted to do:

“Some of my muscles were atrophying in terms of what I really want to do globally. I like it real. I like it raw. I like it deep. I want to bring the sociology of sports out. Our show was going in a direction and format that was going to be lighter. I have done fluffy long enough and I had done SportsNation. I’ve done fluff. I know how to sell cotton candy, but it was time to get to the meat and potatoes. No slight to my boy, Acho, but I was looking different at what I was doing than what he was doing.”

Since then, Wiley has started a weekly More To It podcast, part of The Dan Patrick Podcast Network. He’s talked about other opportunities with Fox as well, but none of those have appeared to come to fruition. But an interview Wiley gave on Thursday’s episode of Fubo Sports Network‘s Getcha Popcorn Ready with T.O and Hatch (with former NFL WRs Terrell Owens and Matthew Hatchette) brought some further light to what exactly Wiley meant about him and Fox wanting different things with Speak. Here’s that clip, which was given to AA in advance of the show’s 7 p.m. ET airing Thursday:

Wiley starts that interview by talking about his unusual path to broadcasting, including going to college at Columbia rather than a DI FBS powerhouse and then shooting content for NFL Network (both reality-style and him interviewing other NFL players) in that network’s early days. Around the 2:05 mark, he starts talking about how he was seeing more and more deeper, interview-focused content he was seeing elsewhere, and how he wanted to do that:

“This is 20-plus years of doing this, and I’ve noticed the shift to more podcasts, vodcasts, authenticity, and I was starting to get jealous. I’m sitting there at this desk going ‘Hey, Dak Prescott’s going to play well this year, the Cowboys are going to win the East.” And meanwhile, I’m watching the cat that I’m a fan of on the internet who’s like ‘Man, that mofo sucks!’, and I’m like ‘That’s a good point.’ Whatever it was, it was starting to get distant between what I was doing and what they were doing.”

“So I was like ‘All right, I’ll keep notice of that.’ Now, all this stuff is starting to boil up in me, then the pandemic hit, then Whitlock and I, we do a show together, he leaves, Nick Khan, my agent, superagent, he leaves. So I’m like ‘Damn, I’m feeling kind of rudderless out here.’  But I’m still doing something that’s fun, that I love, and they were paying, so I was like ‘Yeah, I’m going to do it.’ But I was starting to atrophy in terms of that muscle that I know I have.”

Wiley said the particular way Fox wanted to shift Speak also didn’t seem like a fit for him.

“So contract time comes up, and the first thing they say is ‘We’re going to take this show in a different direction.’ I’m like ‘What’s that direction?’ And it sounded very similar to what I just left in SportsNation. If y’all remember SportsNation, it was fun, it was topical, we go around in a circle real fast.”

Owens then chimes in and said he was set to join SportsNation at ESPN before Wiley left in July 2018, and before it was cancelled in August 2018 (it’s since been revived as an ESPN+ show).

“To your point, I had an audition, and I had basically signed on to do SportsNation when y’all were about to, I guess, re-up, or whatever the case might be, and then it just kind of fell by the wayside. So I never really got a chance to be on there, I went on as a guest, but I was coming on to fill like one of the spots, and to your point, it fell by the wayside.”

Wiley said leaving that show then was the right move for him.

He then said one word that really warned him off of a Speak extension with Fox was “lighter.”

“So, I’m at Fox, and all these changes are occurring, and me and Acho are doing our thing. And then they were like ‘Lighter.’ When I heard that word ‘Lighter…'”

Hatchette then says “Like, mmm, what does that mean?”

And Wiley says  “I know what it means! [laughs] I was like ‘I’m going where I’ve been.’ And that was the first thing that kind of made me step back, withdraw, in the contracts, in the negotiation.”

Wiley goes on to makes it clear he’s not upset with Fox, and he may still wind up working with them.

He said he wants his projects to hit the deeper side of sports, though.

“I want to get my Tony Robbins on, my Deepak Chopra on, I want to go deeper into what we all know, but we don’t always show. Like, every play, there’s an emotional stake, there’s emotional content, there’s how you’ve got to perform, there’s all those things leading up to that moment of truth that we just don’t even discuss any more. We’re just about ‘Did he fumble? Did he score? Who won?'”

Wiley is doing some of that with the More To It podcast. We’ll see what else he has lined up in the days ahead.

The full version of Wiley’s interview with Owens and Hatchette can be seen on FAST network Fubo Sports Network, with its first airing at 7 p.m. ET Thursday.