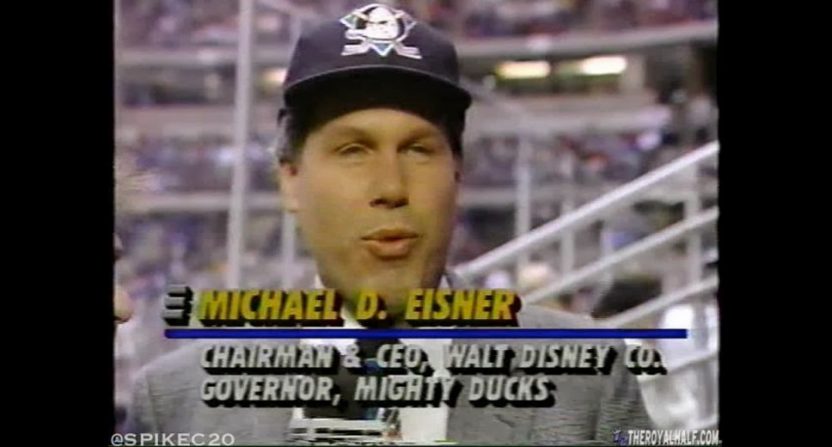 Michael Eisner was Disney’s chief executive from 1984 through 2005, which meant (among many other duties) overseeing ABC and ESPN after Disney acquired a controlling interest.

Eisner is also still involved in the world of sports, serving as chairman of English soccer club Portsmouth. He’s as qualified as anyone to speculate on the future of media in general and sports broadcasting in particular, and according to an interview with Bloomberg, Eisner thinks the traditional broadcast networks are going to be pushed aside in the future. Possibly even the near future.

That means waving goodbye to CBS, NBC, Fox and Disney’s own ABC. And saying hello to Facebook, Amazon, Apple, Netflix and Google.

Tech companies will come in “like Jim Brown for the Cleveland Browns in 1960 — they’re going to be breaking through the line,” Eisner, who led Disney for more than two decades before leaving in 2005, said on the Bloomberg Business of Sports podcast.

Obviously “Tech companies will become more involved with live sports!” isn’t exactly an original opinion. We also haven’t yet seen it come to fruition, for a variety of factors. (Chiefly: those rights deals haven’t really come up for bidding anyway.) Eisner, though, seems pretty sure that just as Amazon and Google and others have managed to muscle into a variety of other spaces, they’ll soon turn their attention to the traditional television networks.

“Sports lights up your platform,” said Eisner, who owns Portsmouth, a third division English soccer team that he often watches play online. “With the financial wherewithal of Apple, the aggressiveness of Amazon, the creativity of Netflix, the existence already of ESPN and ESPN+ — you’re going to see a very difficult time ahead for the U.S. broadcasters. I wouldn’t be surprised if all sports of that level eventually leave broadcast television.”

Eisner isn’t ruling out Netflix, either, despite that company’s repeated insistence they will not be joining the world of live sports. And for good reason:

Eisner didn’t offer a timetable for such a migration, predicting that it wouldn’t happen all at once. Nor does he pay much attention to executives who deny any interest in showing live sports. As an early investor and advocate for Netflix Inc., Eisner recalled company executives Reed Hastings and Ted Sarandos telling him they would never do original programming.

Of course, the original networks aren’t going to go quietly. Some of their most consistent ratings performers come from sports, which is why new companies are probably going to be interested now that streaming technology has evolved to erode the barrier to entry that had protected traditional television networks since, well, the inception of television. More bidders are good for the leagues, too, of course, and theoretically it’s good for consumers, too.

It’s only theoretical in this case, though. Because say what you will about network television, but most people can at least watch it for the cost of an antenna, without juggling a variety of monthly bills and subscriptions on top of paying  for broadband internet capable of streaming sports (or other programming), which on top of being unaffordable for some people is just flatly unavailable for others.