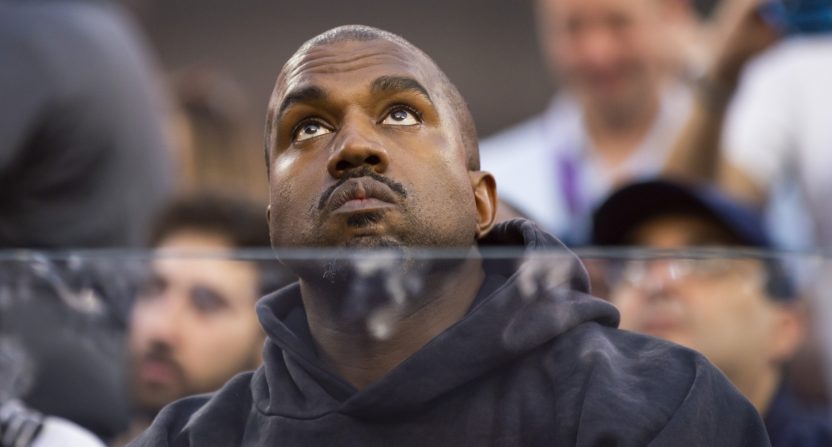 Pre-taped episodes of talk shows sometimes wind up being more controversial than initially expected thanks to their subject’s actions in the interim. That happened with Draymond Green‘s appearance on Uninterrupted’s The Shop (the former HBO and now YouTube show run by Uninterrupted’s LeBron James and Maverick Carter) last week.  There wasn’t anything wrong with Green’s comments on that show on college basketball rivalries, but the way The Shop promoted those with a “f***ing battle” quote was interesting considering how the episode’s airing came after Green’s infamous practice punch of Jordan Poole.

Well, The Shop is now again in the news, and for almost the opposite approach. This time around, they brought on a figure after a controversy. That would be rapper Kanye West (seen above at Super Bowl LVI in February), who recently debuted “White Lives Matter” shirts at Paris Fashion Week, then had his Instagram account restricted, with many citing antisemitic language used against Sean “Diddy” Combs (reproducing a text conversation where he threatened to use Diddy as “an example” to the Jewish people in an exchange over those shirts) as the reason. West then took to Twitter Saturday with a “I’m going death con 3 On JEWISH PEOPLE” tweet, which was removed for violating Twitter’s rules. He also did an interview with Fox News’ Tucker Carlson last week that contained a full minute of criticism of Josh Kushner in what aired, and contained a whole lot of antisemitic comments that did not air (but were obtained by Vice’s Motherboard).

West’s posts have been condemned by groups including the Anti-Defamation League, the American Jewish Committee and the Black-Jewish Entertainment Alliance. And The Shop still thought it was a good idea to bring him on for an episode. But, according to a statement Carter gave to Justin Tinsley of Andscape Tuesday, West used “more hate speech” in that taping, and that episode now will not air.

In an exclusive statement to Andscape, Maverick Carter, the SpringHill Company CEO, said a recently-taped episode of The Shop featuring Kanye West will not air.

“Yesterday we taped an episode of The Shop with Kanye West.  Kanye was booked weeks ago and, after talking to Kanye directly the day before we taped, I believed he was capable of a respectful discussion and he was ready to address all his recent comments.  Unfortunately, he used The Shop to reiterate more hate speech and extremely dangerous stereotypes.

We have made the decision not to air this episode or any of Kanye’s remarks.  While The Shop embraces thoughtful discourse and differing opinions, we have zero tolerance for hate speech of any kind and will never allow our channels to be used to promote hate.

I take full responsibility for believing Kanye wanted a different conversation and apologize to our guests and crew.  Hate speech should never have an audience.”

Sources close to the production say West doubled down on his recent anti-Semitic remarks during the episode. Other guests included shoe designer Salehe Bembury and Jeezy, whom West collaborated with on 2008’s Grammy-nominated record “Put On.” LeBron James was not present at the taping.

It seems like a good move from The Shop to not air “more hate speech and extremely dangerous stereotypes.” But their decision to give West a potential platform after his recent remarks is certainly an interesting one. And it’s one that’s now led to them having to scrap an episode. And it will be interesting to see if any of the guests or crew members will leak what West actually said.