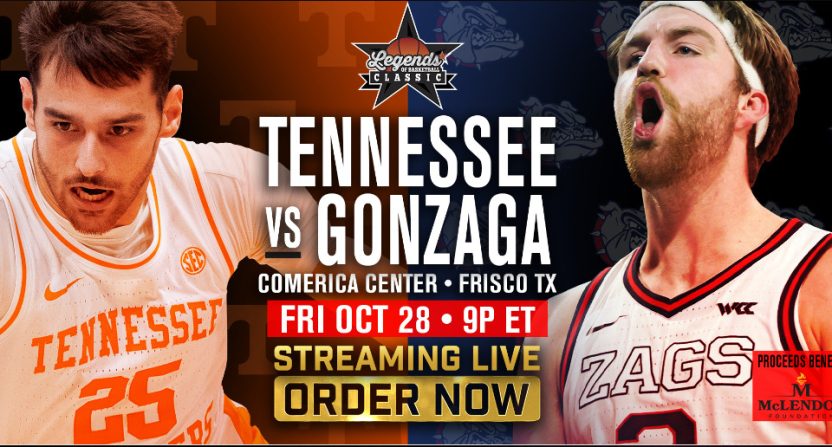 This Friday night (Oct. 28) is going to see an unusual men’s college basketball broadcast, one aired on pay-per-view. That’s the inaugural Legends of Basketball Classic, featuring the Gonzaga Bulldogs (No. 2 in the Oct. 17 AP preseason poll) and the Tennessee Volunteers (No. 11 in that poll). It’s an exhibition game organized by Intersport (managing all ticketing, game operations and event production), iNDEMAND (the game’s exclusive TV and streaming distributor), and the National Basketball Retired Players Association (title partner).

The broadcast of this game begins at 9 p.m. ET, and will be available for $9.99 through iNDEMAND’s PPV.com, as well as most cable/satellite/telco providers. It will benefit the McClendon Foundation (named after famed coach John McLendon, a Naismith Memorial Basketball Hall of Fame inductee as both a contributor and coach), which aims to empower and develop minorities who aspire to be principled leaders in athletics administration by providing educational resources and access to a life-long community of mentors.

And here’s a quote on this from Fraschilla, from a release:

“Not only is this a chance to see two outstanding college basketball teams and Final Four contenders, Gonzaga and Tennessee, early in the year, but the game is also being played for a great cause,” said Fran Fraschilla, longtime college basketball analyst and former head coach who will work the telecast. “This game will recognize many of the incredible contributions that Hall of Fame coach John McLendon has made to the game of basketball and will directly benefit the McLendon Foundation.”

We’ll see how this broadcast goes, how it’s received, and if it leads to more CBB PPVs in the future.

The Tennessee-Gonzaga PPV broadcast is set for a 9 p.m. ET (8 p.m. local) start Friday. More information on it can be found at PPV.com.