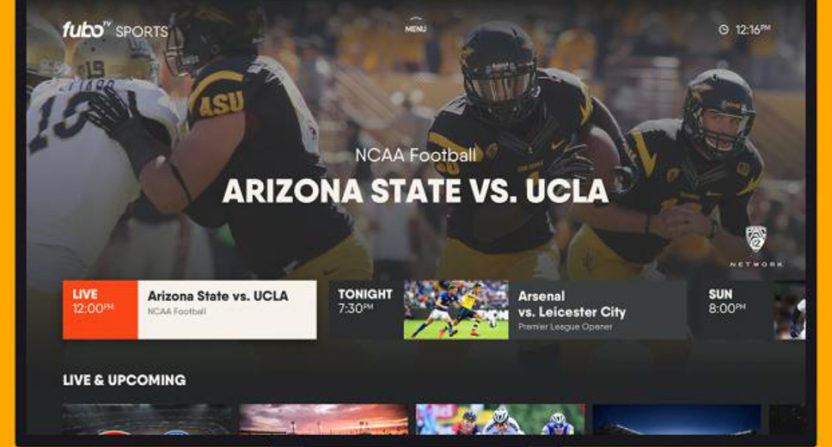 Sports-focused streaming service FuboTV has been including ads on their streams since last summer, but announced Tuesday that they have the capability to offer programmatic (or automated, data-driven) ad buys. That’s thanks to a partnership with ad-serving platform SpotX, which has been underway for a while but was formally announced this week.

They’re not the only streaming service with ads or even programmatic ads, but as Advertising Age‘s George Sliefo writes, advertisers may pay particular attention to Fubo’s offerings given their sports-hungry viewers, and their new ad capabilities could make them an alternative option for those looking to buy ads on sports broadcasts:

“If you are trying to reach a sports-loving audience, you have [had] to do it with traditional cable,” Hammond says. “For us this coming quarter, that is going to be the Olympics, the build up to the Super Bowl, as well as soccer.”

…Both Fubo and SpotX were tight-lipped when it came to financials, but shared that some 150 national brands purchased Fubo’s ad inventory programmatically during the fourth quarter last year, more than double from the previous quarter.

…”As live OTT events become more popular with viewers in 2018, the ability to seamlessly deliver ads via dynamic ad insertion with the same addressability, measurement and monitoring as buyers enjoy in traditional digital video environments will be more crucial,” says Ryan Kenney, VP of platform services at SpotX.

This doesn’t give marketers an alternative way into every event, of course. For example, Fubo can’t sell their own ads on the actual Super Bowl broadcast thanks to their agreement with NBC. And their service doesn’t currently offer ESPN, so games on those networks aren’t a possibility right now.

But Fubo said in October they have over 100,000 subscribers, and they say they streamed over 30,000 sports events last year; some of those are smaller, but they do have agreements for big properties including the NFL, Olympics, NBA, MLB, NHL and UFC, plus lots of soccer. So there’s a significant potential audience here. And the technology through SpotX lets marketers target that audience in a different way.

It”s also perhaps interesting to think about the advantages for marketers in targeting those watching sports through a streaming service like Fubo versus traditional TV. For one, there’s cost; a smaller amount of viewers means it’s likely much cheaper to run an ad on the Fubo broadcast of many of these sports versus the TV broadcast.

That provides an entry point for companies that perhaps couldn’t afford traditional TV advertising. And that smaller audience may be more receptive to particular products than a wide TV audience. For example, an average viewer on Fubo is probably younger and more tech-saavy than an average viewer on CBS (given the challenges of figuring out a streaming service in the first place and the rising age demographics for many sports broadcasts on TV), so maybe that’s a better target audience if your company makes video games, specific technological products or other things that millennials have not yet been accused of killing.

That doesn’t mean the Fubo ads are going to be all relevant or all good, of course. As viewers of streams on network services like ESPN3 or CBS All Access are well aware, the lower price tag for ads also means you get a lot of infomercial-level ads, many of which can be just as annoying or more than what you see on traditional television. And plenty of those don’t have particular relevance to the streaming demographic. But this is perhaps something that will change over time as advertising on streams becomes a more regular option that more companies consider.

We’ll see where this goes, but this is something that could further boost streaming services long-term. And it might wind up being an interesting option both for companies that haven’t advertised on TV much and for those who advertise on traditional TV right now.

Correction: this post initially incorrectly stated that this let FuboTV sell ads against specific programming. It does not.