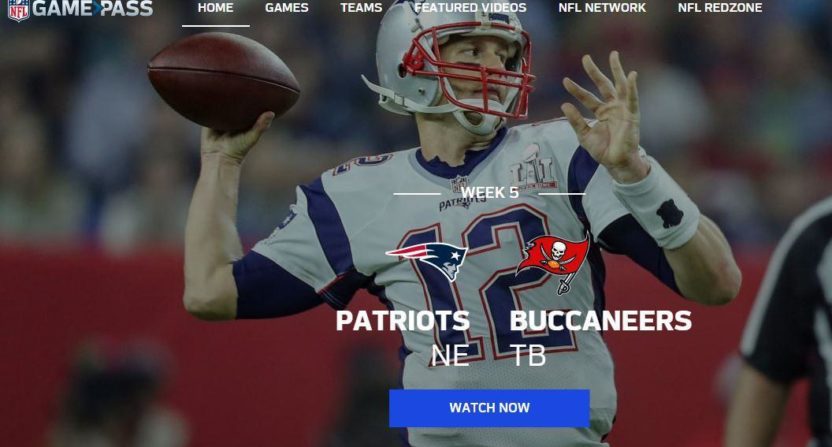 The new NFL Game Pass app for European fans that was launched this summer was widely panned, and that led to a key executive at the developer sending out an e-mail asking employees (and their family and friends) to download the app, give it a five-star rating and leave a review. Ed Malyon of British newspaper The Independent uncovered that e-mail, and published it Friday as part of a wider takedown of the new app (which previously offered access to live NFL games, RedZone, previously-played games via streaming or download, and more). Here are the highlights from that e-mail, which Deltatre international markets managing director Stefano Rigat sent to his employees:

As I am sure you are aware, we recently launched the NFL Game Pass Europe OTT service. A super challenging project and overall good performance, however one the biggest problems we have now is poor Apps rating in the stores. This is mainly due not by the quality of the apps themselves but by lack of content/features at the launch of the platform in July, which made a lot of existing fans unhappy.

We worked very hard during the month of august to add back what the fans were expecting. We are now in a good place, but unfortunately the damage is done – we have very poor Apps ratings both in Apple and Google stores, and it is very hard to recover in a short time frame.

I am therefore asking you (and your relatives, family, friends – just spread the word!) to:

…The goal for you to place at least 3 ratings each. We are 500 in the company, if we manage to have three 5-star votes (so 1500 overall) we will make an impact!

So, yeah, some employees did that under their own names.  And those five-star reviews particularly stood out considering that most of the other reviews were one-star. Here’s a look at the Google Play ratings as of Friday from Malyon’s piece:

So that led to people finding out and raising hell. And there are some legitimate concerns there; Malyon notes that this appears to violate the UK’s Competition and Markets Authority guidelines, and that that agency has taken action against companies over fake reviews before. Deltatre apologized for those reviews in a statement to the paper and said they’d remove them and would ensure it wouldn’t happen again, and NFL executive vice president Mark Waller said in another statement the league was “very disappointed” with that practice by Deltatre. But it’s also notable that this all came because the product was so bad. Here’s part of Malyon’s piece on the downgrades it offered from the previous version:

Users have so many complaints about the app that it is hard to distil them all down. The key ones are that many of the best functions of the old app – the ability to search, the ability to download condensed games onto your iPad or iPhone – aren’t there anymore. iOS downloads were eventually added in a recent upgrade but the much-trumpeted ‘Spoiler Mode’ hides the scores only to still shade the winning team, thus offering the exact spoiler users are trying to swerve. What’s more, the timeline during the game shows when points have been scored and thus informs the viewer, who was hoping to be spoiler-free, when the next significant play is going to come.

Many fans, in the absence of all the bells and whistles, would settle for the basics.

They want to tune in on a Sunday evening and be able to stream the games – or RedZone – with no problems. But the overwhelming flood of complaints has been that live streaming, the app’s number one purpose, has been impossible. On five separate accounts tested by The Independent on different internet connections it was impossible to watch more than five minutes on Sunday nights without the app throwing up an error message and cutting off the stream. A repeat experiment with more devices during Thursday night’s game between the New England Patriots and the Tampa Bay Buccaneers threw up the same results.

This is far from the only issue the NFL’s had with international streaming apps, as the DAZN issues in Canada led to that company apologizing last month. And similarly there, that’s been a new service that replaced the previous NFL Game Pass (plus the on-TV NFL Sunday Ticket). Growing pains are inevitable with new services, and both of these may get better with time, but it also looks like the NFL’s push to work with new companies and keep driving international expansion is having some negative effects. And those can’t be solved with fake reviews.