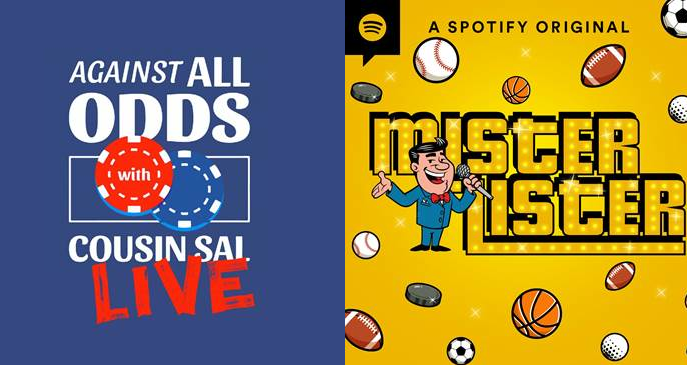 While Spotify is largely known for music and for podcasts (including the sports and culture podcasts they’ve picked up since their 2020 acquisition of The Ringer, they’ve also been taking some dives into live shows, especially in sports. Earlier this year, they announced two Spotify Live (the renamed Spotify Greenroom) sports shows with prominent personalities, Upon Further Review with Trey Wingo and Mark Schlereth and We’re Good Here with Charissa Thompson. They’ve now announced two more, a trivia show featuring Dave Dameshek and a betting show with “Cousin Sal” Iacono. Here’s more on that from a release:

This week, Spotify is introducing two new live sports shows just in time for kickoff of what is sure to be an exciting season. Against All Odds with Cousin Sal, co-founder of The Extra Points Podcast Network and betting expert, and the Degenerate Trifecta will be kicking off football season with all the best betting commentary and advice. The show will air live twice weekly, Sunday and Thursdays at 7:15pm PT / 10:15pm ET.

…The biggest moments in football and the live lines on the line! Come hang with a rotating cast of hosts from the Extra Points Podcast Network as we all watch our best bets cash or crash. Fourth quarter fun or end of game agony? Come hang every Thursday and Sunday to find out!

Mister Lister, hosted by football analyst and trivia king Dave Dameshek, will keep the energy flowing after an exhilarating weekend of sports with interactive and intense trivia with the master himself. Premiering tonight at 4pm PT / 7pm ET, Mister Lister will air live every Tuesday to test your knowledge of the games!

…Each week, trivia master Dave Dameshek challenges the audience to test their sports knowledge and step up to the plate against Mister Lister and other sports trivia nerds! Can you hang?

Dameshek and Iacono have worked together before, including on the flagship Extra Points podcast Iacono launched his company with in 2020, so it’s interesting to see them both head to Spotify Live for different shows at the same time. The Against All Odds show here with Iacono and his childhood friends “The Degenerate Trifecta” is a long-running one, starting at The Ringer and moving to Iacono’s Extra Points company in 2020, and now it’s heading to Spotify Live. We’ll see how these shows do for Spotify Live, but it’s notable to see them continuing to expand their lineup of live shows in sports.