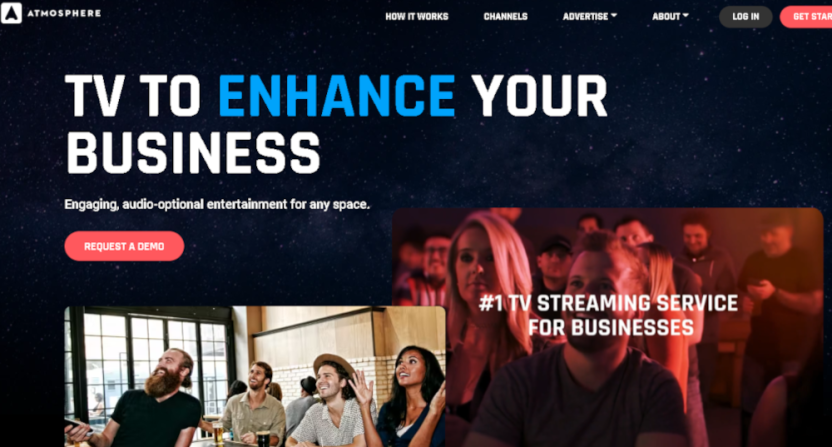 One interesting and often-less-discussed segment of streaming TV services is those targeted at businesses rather than at individuals. That’s what Atmosphere does, and they cite more than 60 original and partner channels, more than 45,000 venues (restaurants and bars, gyms and health clubs, medical waiting rooms, and more), and more than 60 million monthly viewers. On the sports side alone, they launched their own specific Atmosphere Sports channel in March, then added Real Madrid TV in September. And they’ve now teamed with the PGA Tour for a third unique sports channel, plus PGA Tour content on the Atmosphere Sports channel. Here’s more on that from a release:

Atmosphere (www.atmosphere.tv), the worldwide leader in streaming TV entertainment for businesses, today announced a content agreement with the PGA TOUR to bring both highlights and dedicated golf programming to the Atmosphere platform and its audience of 60 million monthly viewers.

“Atmosphere has built an innovative platform with significant reach and an active, engaged audience,” said Norb Gambuzza, PGA TOUR Senior Vice President of Media and Gaming. “We’re excited to work with Atmosphere to deliver a dedicated PGA TOUR channel onto its platform with a goal of engaging more fans.”

Launching today, the channel features a mix of tournament coverage highlights, tournament recaps and footage from the PGA TOUR’s most iconic moments. Additionally, the PGA TOUR’s highlights will be played on Atmosphere Sports, the platform’s popular sports news channel.

…“With golf being one of the most watched sports in the world, we’re immensely proud to be partnering with the PGA TOUR to provide businesses with a viewing experience tailored to their spaces,” says Blake Sabatinelli, Chief Operating Officer at Atmosphere. “The addition of golf to our platform has been one of the biggest requests of our fans, but also one of the hardest to obtain, so to have the world’s most competitive golf tour on Atmosphere shows just how far we’ve come in 2022, and how much further we can grow in 2023.”

Sabatinelli spoke to Awful Announcing via e-mail, and said golf was a particular fit for them, letting them bolster their sports content in a way that fit their demographics.

“Atmosphere’s platform is particularly popular among the age 18-34 demographic. With the rise of golfers within this demographic (27 percent in 2021), the adoption of a golf channel seemed obvious,” he said. “And in general, including more sports beyond the Atmosphere Sports news channel has been a frequent request among the venue and business owners that partner with us. This is also an opportunity to showcase the PGA’s outstanding content catalog and share it with the diverse set of businesses that run on our network.”

He said the overall Atmosphere Sports channel has become a hit since its March launch, and adding PGA Tour content there will boost it further.

“Atmosphere Sports is the fastest growing channel in the company’s history and the third-most popular channel on the platform,” Sabatinelli said. “Having PGA Tour highlights on Atmosphere Sports allows us to meet fan demand and to provide more long drives, incredible chips, and mind-blowing putts, supplementing our already popular sports coverage.”

Sabatinelli said there’s a useful delineation in having a specialized PGA Tour channel as well as PGA Tour content on the main Atmosphere Sports channel.

“Atmosphere Sports provides news and highlights for dozens of different sports channels and leagues. Specialized channels such the PGA TOUR channel are for dedicated fans who are looking to engage deeper into these specific leagues.”

In that release, Sabatinelli mentioned “how much further we can grow in 2023.” He told AA they have more channels in mind, but those selections are going to be based on data.

“We’re a data-driven company, so we’re constantly looking at viewer behavior to determine our next steps. I’d expect to see additional dedicated channel launches that cater to our audience, as well as other fun projects that we can’t yet mention.”

Sabatinelli said Atmosphere stands out in the space thanks to offering content that’s customized for the out-of-home viewing experience.

“A significant amount of television viewing happens out of home. Unfortunately for viewers, a majority of that content is played on mute, with captions on, which is a terrible viewing experience. Atmosphere is made for the out-of-home viewing experience, and we’re excited to bring content that can truly be enjoyed to viewers in the third space to everyone.”