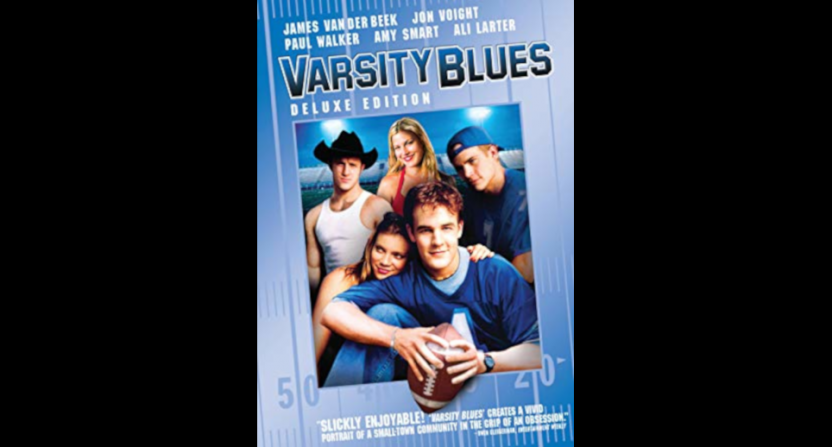 There’s going to be a new project branded Varsity Blues, but it looks like it will be very different from the 1999 movie starring James Van Der Beek, Jon Voight and more. The new version will be a series of shorter episodes on mobile viewing-focused platform “Quibi” (short for Quick Bites, it’s led by prominent executives Jeffrey Katzenberg and Meg Whitman, known for past work with Dreamworks and eBay respectively).

It’s unclear just how many people involved with the original are involved with this remake. As per Vanity Fair‘s Kevin Fitzpatrick, this will be directed by Anne Fletcher and written by Tripper Clancy. Neither had any involvement with the first film, but they’re known for recent movies Dumplin’ and Stuber respectively. The remake will be executive produced by two producers from the original movie, Mike Tollin (who’s been involved in a whole lot of sports projects, from Arli$$ to We Town) and Tova Laiter (also an executive producer on 2013’s Compulsion and 1995’s The Scarlet Letter).  And Tollin’s quoted in Fitzpatrick’s piece as saying “For all those who cheered Mox’s refrain, ‘I don’t want your life,’ as well as all those who never heard of the West Canaan Coyotes, we’re thrilled to bring Varsity Blues to Quibi and into the 21st century!”

So, what exactly is Quibi? Well, it’s a service with a lot of funding and some prominent names attached, but one that hasn’t attracted a huge amount of widespread attention to this point. Here’s more on what that service will be from a June Vanity Fair article by Nicole Sperling:

“I’m going to continue to believe, and argue, and preach that Quibi is not a substitute or a competitor for television,” Katzenberg told me when we spoke this week. “Our [service] is exclusively about what you do from 7 a.m. to 7 p.m. on your phone. And what you’re doing today, if you’re in our core demographic of 25- to 35-year-olds, is you’re actually watching 60-70 min of YouTube, Facebook, Instagram, and Snapchat. That growth is now a well-established consumer habit that Quibi is sailing into.”

The company has been in the works since 2018, and Whitman and Katzenberg have slowly been building buzz around it. (They announced the name at Vanity Fair’s New Establishment Summit last fall.) But this week saw a ramp-up in their press offensive, with more details trickling out. The service will cost users $4.99 a month with advertising and $7.99 without, and will feature about 7,000 pieces of content at launch—including Quick Bites, which are unserialized programming, such as the new eight-episode stunt-driving series starring British heartthrob Idris Elba and rally car driver Ken Block; Daily Essentials, a three times a day, six-and-a-half minute news program curated for your personal tastes; and their pièces de resistance: “Lighthouses,” serialized programming from filmmakers as disparate as Steven Soderbergh and Paul Feig, that will likely range in length between two to four hours and are divvied up into 7- to 10-minute chunks.

There are definitely some big names in there, and yes, there absolutely are people who like watching shorter Instagram or Snapchat videos on their phones, so the audience they’re trying to reach isn’t imaginary. But it’s questionable just how interested that audience will actually be in watching repeated seven-to-10 minute chunks of longer programming on a phone screen. And while having big names and recognizable brands can be important (see also what Snapchat’s trying to do with its new slate of shows, including a bunch of YouTube personalities and also Serena Williams and Arnold Schwarzenegger), a $4.99 to $7.99 monthly paywall isn’t insignificant, especially considering the ever-growing list of subscription services.

How much interest will there be in a drastically different version of Varsity Blues? It’s hard to say. The movie’s 20 years old at this point, but it’s still quoted and referenced (in fact, this year’s college admissions scandal FBI investigation was dubbed “Operation Varsity Blues”), so there’s still some interest in it. And pivoting from a movie to a dramatically different TV series worked out quite well for Friday Night Lights, another story of Texas high school football. We’ll see how this one goes and what kind of an audience it gets.