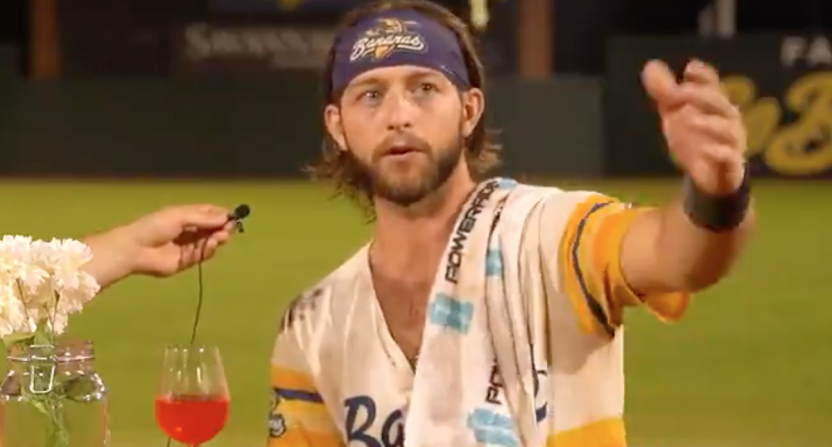 Putting microphones on baseball players and talking to them while they’re playing in the field has mixed results and popularity among viewers. Sometimes, the audio is risky, as when White Sox pitcher Liam Hendriks let loose a bunch of expletives during this year’s MLB All-Star Game.

But at the minor-league level, mic’ing players up can create something fun. The minors are exactly where such chances should be taken, and the Savannah Bananas were rewarded with a fine moment of prognostication from third baseman Bill LeRoy during Saturday’s game against the Macon Bacon.

In the top of the third inning, LeRoy was on the Bananas’ broadcast with Biko Skalla while at his position and predicted how he would make the out on Macon’s Coston Anderson.

“I’m gonna roll it over, gonna backhand it on the second hop, and Manny Machado underhand throw it to Ashly [Morris] first,” said LeRoy. And that’s exactly what happened after the next pitch. Give a listen to the call:

You literally cannot make this stuff up. @bleroy28 calls his own play while mic'd up with our broadcaster to make the out ??? pic.twitter.com/xrfEdJLQgT

Beginning with the “oh my god” of anticipation of making the play, LeRoy’s narration of the throw to first was equally entertaining.

“Look at this, Biko! Biko!” he said, laughing as the play unfolded. “I literally just called that! That was the second hop. What the heck? There’s no way!”

LeRoy showed his entertainment value earlier in the season when he introduced himself while coming to bat.

Easy top three moment of the night was Bill Leroy introducing himself to the plate. pic.twitter.com/MYk4y0pr4r

Then there was the post-game interview/date that LeRoy had with Skalla after an 8-7 win over the Bacon on July 28.

Biko gets all dressed up to take Bill on a little post game date. Hear all about what Bill has to say about the 8-7 win and his recent viral video. pic.twitter.com/KEn6VyMb0g

The Savannah Bananas are part of the Coastal Plain League, a wood-bat summer league with college players. LeRoy is coming off his senior season at the University of North Georgia, during which he batted .306 with an .882 OPS, 15 doubles, and five home runs. So far this season with the Bananas, LeRoy is hitting .269 with a .737 OPS in 114 plate appearances.

Hopefully, we’ll be seeing more from LeRoy in the future, whether it’s from a great baseball play or another fun broadcasting or announcing moment. And keep checking in with the Bananas. They’re keeping baseball fun!