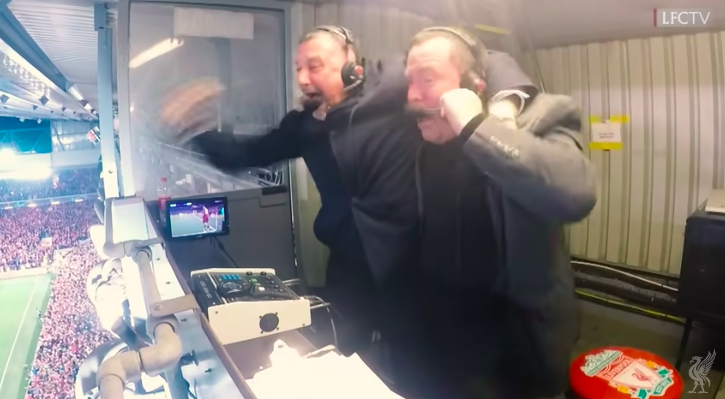 Earlier this week Liverpool completed a historic comeback in the Champions League semifinal, overturning a 3-0 deficit against Lionel Messi and Barcelona with a dramatic 4-0 victory at Anfield. What made the comeback all the more astonishing was that Liverpool did it without two of their world-renowned triumvirate in attack with Mohamed Salah and Roberto Firmino both out injured.

However, against all the odds Divock Origi continued a season of heroic performances with two goals and midfielder Gini Wijnaldum added two more off the bench to complete the 4-0 triumph. Even if you’re not a soccer fan or a Liverpool supporter, the scenes at Anfield were simply electric.

Thankfully, the official Liverpool YouTube page had a camera in the Reds’ broadcast booth to record the reaction of the announcers calling the action. Ride along with commentators Steve Hunter and John Aldridge as they celebrated each and every Liverpool goal:

I think the best part of this video is the simple fact that Liverpool had a camera in the booth on the .001% chance that they could pull off this comeback against Barcelona, in order to then make it into a viral sensation. It’s also amazing to see the real-time reaction to Trent Alexander-Arnold’s quick thinking on the corner kick that led to the final goal. I combines extreme jubilation with the element of surprise, which may be the best combination of emotions in the human realm.

Huge comebacks are a big part of Liverpool’s DNA, so maybe someone believed that it was actually possible. The Reds face fellow EPL side Tottenham in the Champions League Final on June 1st after Spurs had a miraculous comeback of their own against Ajax.