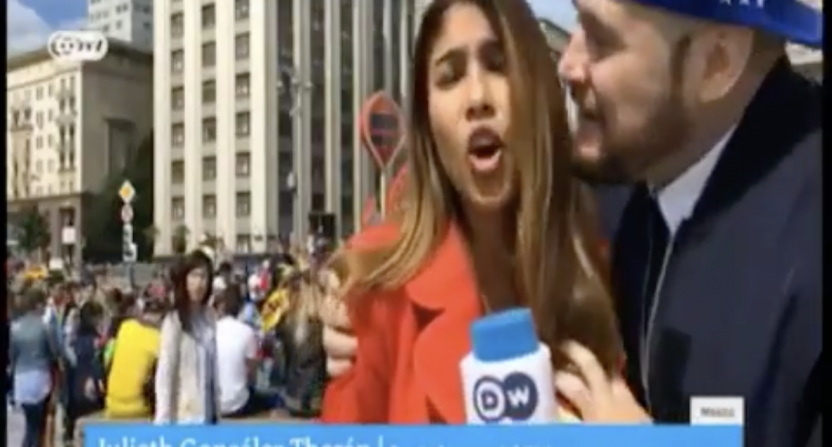 Several times during the ongoing World Cup, videos have gone viral of female television reporters being harassed by male fans while simply trying to do their jobs.

The problem has apparently become serious enough that the Brazil office of UN Women, a branch of the United Nations, released a statement over the weekend condemning such harassment.

“It is unacceptable the deliberate intention of some Brazilian fans to sexually harass women during the World Cup, using embarrassment, deception, and thus violating the human rights of women,” said the agency.

“With low slang words, they reduced women to sexual objects in the demonstration of how misogyny, which even underlies the culture of rape, takes different forms and has no borders, occurring in an event that aims to promote the integration of peoples and feelings of union for sport.

“To Russian women and women of all nationalities, UN Women Brazil expresses its solidarity,” the agency added.

The UN Women statement describes a couple specific incidents, one of which might be the one involving Sport TV’s Julia Guimarães, who ducked a fan’s attempt to kiss her while she reported on the Senegal-Japan match Sunday.

Guimarães tweeted shortly after the incident that such an attack had actually happened twice.

Also during this World Cup, Colombian reporter Julieth Gonzalez Theran of Moscow’s DW Español had a man grope and kiss her while she was live on air. Theran posted the clip on Instagram with plea for respect, writing in Spanish, “We don’t deserve this treatment. We are equally valuable and professional.”

Unfortunately, this type of harassment is not unique to the World Cup. In one other recent viral example, Mexican Fox reporter Maria Fernanda Mora turned and whacked a fan with her microphone after being groped from behind.

If you are reading this as someone who ever might consider kissing or otherwise touching a reporter (or any woman, really) who has not expressed any desire to be kissed or otherwise touched, we have some advice for you: Definitely, definitely don’t do that.