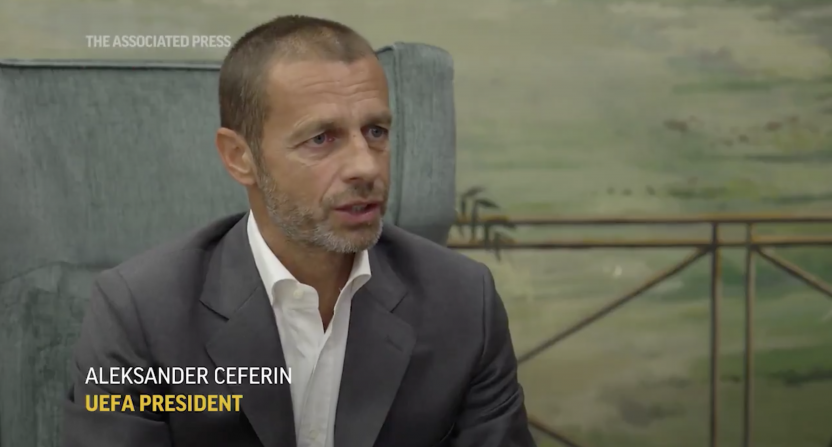 On the day of the 2020 UEFA Champions League final, UEFA President Aleksander Ceferin dropped a rather surprising note on the potential future of the competition. After UEFA was forced to truncate this year’s tournament, Ceferin noted that a single-game round “seems more interesting” and wants to talk to UEFA leaders about possibly making this a permanent concept in their competitions.

What makes Ceferin’s comments surprising is this is a rare instance of a sports league executive discussing the possibility of having fewer games in their tournament. In most leagues, leaders are looking for ways to expand their playoffs in order to raise more TV revenue. Soccer is no exception with FIFA expanding to a 48-team World Cup for the men in 2026. Ceferin is talking about doing the opposite, which will surely affect TV rights fees if implemented.

The head of European football says he will hold talks about the format being used again.

Normally, after the 32-team group stage, the two winners from each group participate in a 16-team tournament where the team with more goals after two games (one home, one away) advanced to the next round. Only the final is single elimination. Due to the COVID-19 pandemic, UEFA had to adjust their tournament this year. After this year’s round of 16 completed, the quarterfinals, semifinals, and final were all single-game rounds at a neutral site in Lisbon, Portugal.

Ceferin made it a point to say that there’s nothing inherently bad about the current (non-COVID) setup, and he’s right, but the single-game final eight setup has resulted in some wild outcomes.

Since the restart, the winning team scored multiple goals in all 10 games. In the quarterfinal, an average of five goals were scored per game; although half of those goals were scored in Bayern Munich’s 8-2 win over Barcelona. In the semis, a pair of 3-0 contests further showed that almost as many goals were being scored in one game than in two.

A lot of that is because there’s more urgency in a 90 minute game than in an 180 minute game. Obviously, there’s urgency in both but the first game in a two-game series is all about not losing instead of winning. If you lose 1-0 after the first game, especially if you’re the away team, you know you have another 90 minutes to turn that around. So teams are almost overly cautious to make sure they don’t lose the round in the first game. In a 90 minute game, that goes out the window and a team needs to hit the ground running from the start.

In addition, top teams benefit most from a two-game series because there is time for that talent to shine and overpower an inherently “weaker” team. That’s why the same few teams seem to do the best each year. This year, PSG, RB Leipzig, and Lyon, three teams who either never made or rarely made the semis, all qualified this year. Last year, Tottenham making the final proved that it’s still possible for an outsider to pull off the upset but it would be easier of things changed.

Will this happen? It’s tough to tell. Ceferin himself said it’s “much too early” to know if this’ll be a permanent change. Not only do teams and leagues need to support it, it’s gotta fit in a cramped soccer schedule that has few openings for changes. Will single-game rounds be at a neutral site or will one team have the benefit of being the home team? When fans are able to attend games, will teams support a system that potentially means losing out on revenue from not hosting a quarterfinal and/or semifinal game? Will networks see Ceferin’s point that fewer games create more value in each game when they see they’re paying lots of money to potentially broadcast fewer games each year?

Ceferin’s idea might be a nice thought but I just can’t see everybody, especially those who stand to not make as much money, to support his idea. At least Ceferin realizes that there’s a potential danger in watering down your competitions by having too many teams or playing too many games. Maybe his peers, who might only be looking at TV money instead of how their playoff system would be affected, should take notes.