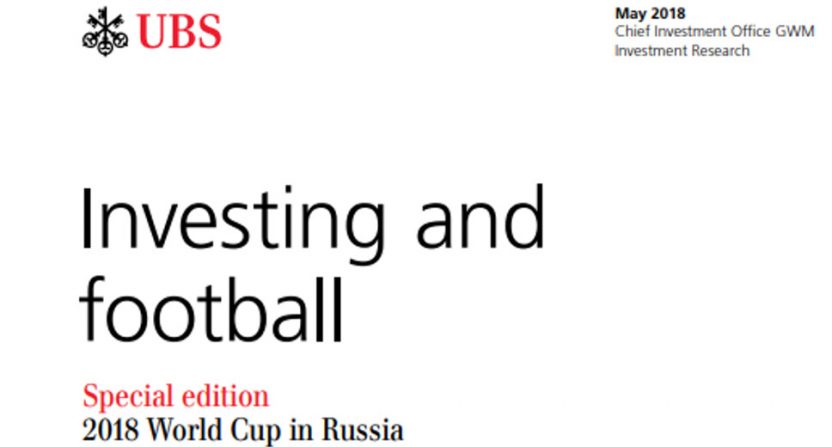 With the 2018 World Cup fast approaching, we’re headed towards a whole ton of companies trying to cash in on the tournament’s popularity with vaguely-connected efforts that they hope someone will write about. The latest case in point comes from Swiss bank UBS AG, which produced a 17-page document discussing the tournament in every facet from “surprising facts about Russia” through “What investors can learn from successful football teams”  through probability calculations of the winner from the teams involved. And it’s that latest part that gets really weird, especially considering how Bloomberg wrote about it. Because the graph Bloomberg’s piece features includes a team that didn’t even qualify, Italy. 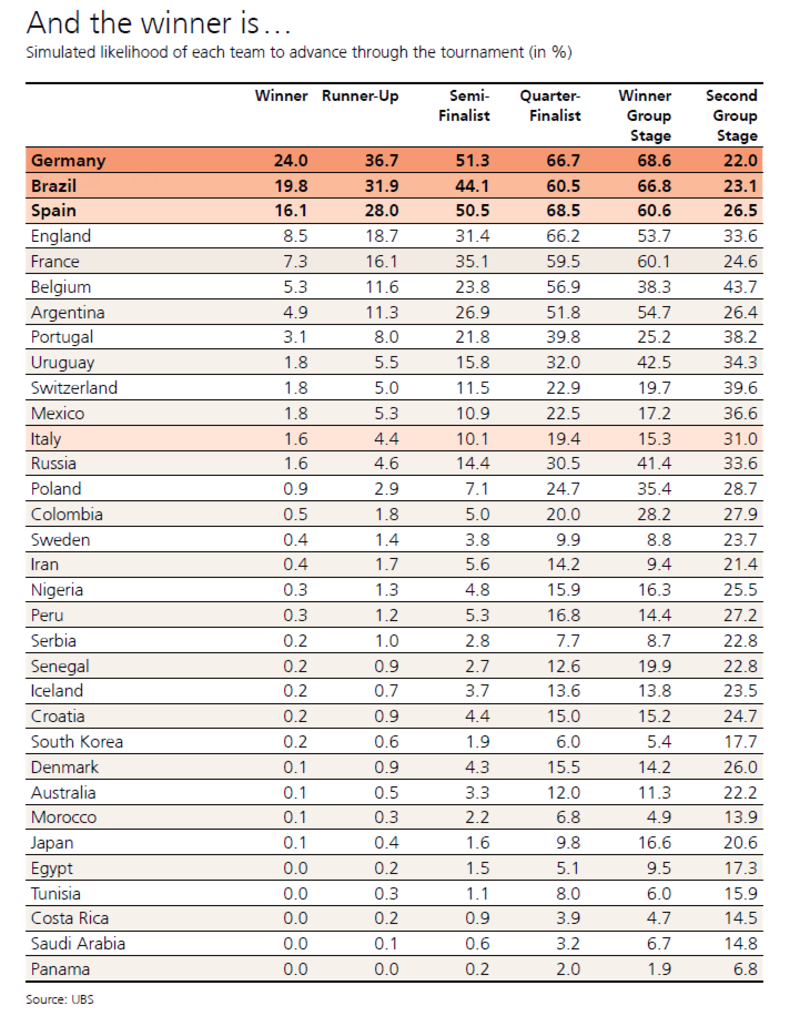 The Bloomberg piece has no mention of Italy, but the UBS piece “explains” why they put them in (to one set of simulations; they also did one without the Italian team) despite Italy losing to Sweden in qualification:

There are many teams which will be missed in Russia, but none more so than Italy. The Italians have won the championship four times and made it to the final another two times. Since 1930, they’ve only missed two other tournaments, the first not because they didn’t qualify, but because the team decided not to undertake the long journey to Uruguay. Given the international focus on Italy’s absence after the Swedes defeated Gli Azzurri in a dramatic showdown in late 2017, we simulate another competition, including Italy instead of Sweden. In its current form, Italy is roughly at par with Mexico.

Hence, even if Italy managed to end the group-stage competition in second place behind Germany, Brazil would likely await them in the round of 16. And that, we fear, would be the end of the road for the Azzurri. We hope to see Italy four years from now. The tournament doesn’t seem quite the same without them.

Okay, that’s definitely an interesting justification for rewriting history and conducting your simulations with a team that isn’t actually going to be present. But this whole overall approach is weird. The Bloomberg piece says “UBS deployed a team of 18 analysts and editors, and ran a computer simulation of the tournament 10,000 times” in an apparent attempt to try and bolster the simulation’s credibility, but how about if we examine what UBS actually mentions about their simulations?

And the winner is… Germany, Brazil, or Spain. The likelihood of one of these three teams winning is 60%, according to our calculations. What do they have in common? A number of factors which tend to be reliable indicators of how well a team will be doing during the tournament.

First, they are the top three teams according to the so called Elo rating. The Elo rating is an objective measure of team strength. It also looks at how well a team has played in the past, but unlike other ratings, victories versus stronger teams will improve the rating by more than wins versus weaker opponents. Similarly, more important matches count more than friendly games. It is one of the most important indicators to explain the likelihood of success at the World Cup.

Second, they look back to a successful qualification. Germany won each match, Spain didn’t lose, and Brazil lost only its first game against Chile back in October 2015.

Third, they successfully participated in previous tournaments. They all have won the tournament before. Since 1930, they’ve won 10 out of 20 competitions and they rank above most others when we count the number of previous participations. Brazil is the only nation that has participated in every single tournament since 1930, and also holds the record as a five-time champion.

Controlling for these factors, plus the advantage of the home nation in the case of Russia, we calibrate a statistical model using the results from the previous
five tournaments. With this model, we estimate the most likely outcome of the upcoming matches. In this context, also in football a common disclaimer
applies: Past performance is no guarantee of future results.

It’s always nice when your discussion of your model mentions that it’s no guarantee, but beyond that, some of this is utterly absurd. For example, why does it matter that these countries have regularly participated in and won the tournament before, especially when many of those tournaments happened long before any of today’s players were born? (This isn’t the latest attempt to include that, though; for example, a similar PriceWaterhouseCoopers analysis in 2014 said “We found that the footballing ‘tradition’ of a country is important in explaining historic World Cup success.”) Beyond that, there have been plenty of cases of teams’ qualification results not translating to results at the actual tournament, for good or ill.

The only actual thing here that has any logic to it is the Elo rating (devised by Arpad Elo), which is used in chess and other games to try and calculate how competitors do against stronger and weaker opponents, but even that has plenty of issues; it was part of the much-criticized BCS computer rankings, and can encourage inactivity (or just going for guaranteed wins to maintain a rating) from top competitors. And while Elo ratings can provide some insight, they’re far from the be-all and end-all of performance prediction, especially as they don’t consider anything unique to the sport or game in question, only the results. Oh, and how did UBS get from Elo ratings to a simulation? They threw in qualifying results (that historically don’t have a ton of predictive power), historical results (that involve few to none of the current players), and…random variables to try and account for upsets. (There must have been a heck of a lot of those for England to wind up in fourth here.)

To account for the many different roads to the final, we conduct what statisticians call a Monte Carlo simulation. What might sound fancy to some readers is in practice quite simple: Instead of mapping out all the different constellations, we draw a large number of random variables and use these to bring in a random  component to our calculations and to simulate the championship. A better team is still more likely to win than its lowerranked opponent, but this is sport, and upsets DO happen. After we’ve repeated this again and again, we end up with the results of 10,000 virtual tournaments. We then simply count how many times each team won, made it to the semis, or was already eliminated in the group stage.

Look, if UBS thinks it’s worth assigning 18 people to produce a booklet full of “surprising facts,” “what investors can learn from successful football teams” (“Agility. Balance. Calm.”) and these kind of predictions, more power to them. Maybe someone will read it and decide to invest with UBS instead of a competitor, and it’s certainly a better use of their employees’ time than say, oh, doing things that get them questioned in FIFA corruption investigations. But the weird part here from a media standpoint is Bloomberg not only giving such credence to such an odd simulation, but doing so by including the results with Italy, without even mentioning that they’re not actually in the tournament. Good work all around, everyone.