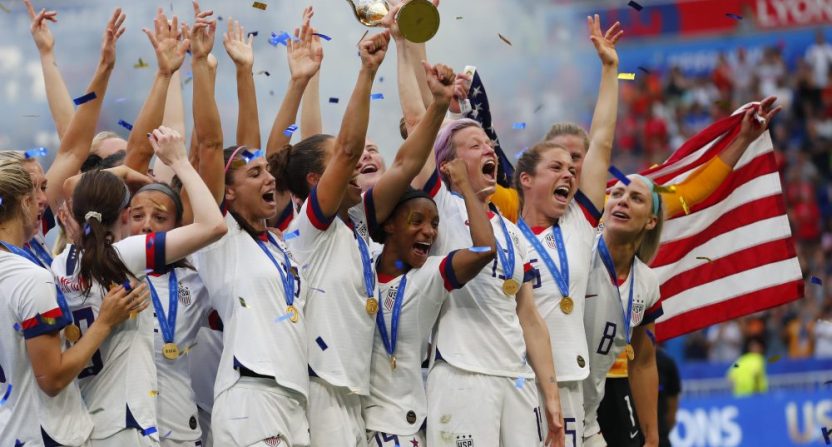 U.S. Soccer’s decision to hire a political lobbying firm in an effort to battle the USWNT’s equal pay efforts was criticized at the time, for obvious and various reasons. Today, a report in the Wall Street Journal detailed perhaps the most damning fact yet: the lobbying campaign was based in part around an incorrect Women’s World Cup revenue figure from a Forbes.com report.

Using a digital presentation prepared with U.S. Soccer, the lobbyists explained that women get far less in World Cup prize money from FIFA, soccer’s world governing body, in part because the 2019 women’s tournament was projected to generate a tiny fraction of the men’s World Cup’s billions in revenue—just $131 million. The lobbying was part of what a U.S. Soccer spokesman at the time called an effort to make sure lawmakers have “accurate information and factual numbers” about the federation’s support for women’s soccer.
There’s just one problem with that revenue figure: It’s wrong.
The “revenue” number actually was an expense. It came from a confusing FIFA financial report that was misreported by Forbes.com last spring. The figure spread through other reports and on social media this summer, as a debate raged about how much women’s players in the U.S. should be paid, and was picked up by U.S. Soccer.

So, where did that $131 million come from? According to the Journal, FIFA says it was actually investment, not revenue generated:

The $131 million figure seems to have first appeared as a “revenue” figure in a Forbes.com column on March 7—coincidentally, the day before the U.S. women’s team sued U.S. Soccer. The Forbes column asserted that the gulf between the winning teams’ prizes—$38 million to the 2018 men’s World Cup winner versus $4 million for the women’s 2019 winner—was justified because of the 2019 Women’s World Cup’s projected $131 million in revenue. It linked to a FIFA financial report.
But the $131 million in the report referred to the projected expenses for the 2019 Women’s World Cup, not revenue. FIFA confirmed that fact in an email to the Journal.

None of these things, on its own, is really that unbelievable. Lobbyists distort facts all the time, U.S. Soccer has certainly played loose with accounting figures throughout the battle, and the original Forbes report, from Mike Ozanian, was based on FIFA’s financial reports, which listed “Total Revenue” as $131 million. Ozanian wrote an explanatory piece that’s up today, and Forbes has taken down the original post.
From Ozanian’s update:

That number was based on FIFA’s 2017 report that estimated the numbers for the upcoming World Cup cycle. I linked to the report in my story. On a page that summed up the total investments and revenue expected, under the column that simply stated, “Total revenue,” FIFA listed the Women’s World Cup number at $131 million. Simple math from there—except in FIFA-land. Six months later, the Wall Street Journal has discovered that the $131 million number was actually “investment,” which they confirmed with FIFA.

There’s more than one issue in play here, of course. That FIFA’s accounting principles would be confusing is certainly not hard to imagine. It strains credulity, though, that the Women’s World Cup, which delivered impressive ratings just in the United States alone, would only generate $131 million in revenue from broadcast rights (much less anything else that would go into the calculus.)
Ozanian doesn’t seem convinced that the $131 million is wrong:

I spent the early morning today trying to confirm and pin down the facts with FIFA. They confirmed that the figure was “the initial investment budget”: in other words, what they committed to put in. How much of this (or in excess of this) did they generate? From there, welcome to the world of FIFA accounting.

This of course flies in the face of convention at almost any business, which has to allocate revenue and expenses all the time. We also know that FIFA analyzes the value of these rights to these events separately. To counter, I showed them a number that broke out the 2011 Women’s World Cup revenue as $73 million and would seem to dovetail with a $131 million figure eight years later. No word back on that yet. They would not provide any guidance on what revenue for the Women’s World Cup is, how revenue differs from investment, or how the two figures have differed over time.

The WSJ reporting included this statement from FIFA, which seemed to suggest that the bundling of rights made it impossible for a revenue figure to be derived for the Women’s World Cup; which is odd as it didn’t stop them from announcing a revenue figure for the men’s version in 2018:

If forced to speculate, it seems like FIFA spent so long treating the Women’s World Cup as an anchor attached to the men’s version that they assumed there was no actual value added, and whatever math they’ve been using hasn’t adjusted to the reality of the women’s edition being incredibly popular on its own. That would explain why the rights bundling only seems to work one way when it comes to producing a total revenue.
None of this explains why U.S. Soccer and their lobbyists thought it responsible to run with the Forbes piece, other than the fact it made their case look good. Presumably, U.S. Soccer has much more relevant internal accounting they could rely on, if it did indeed support their claims.
[Wall Street Journal]