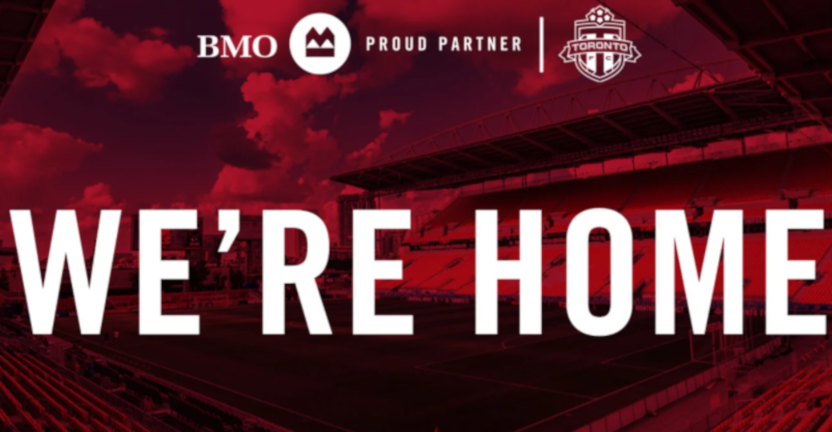 Plenty of things get reported on before they’re official, and it’s always important to make that clear, as there are some cases where something changes and a seemingly-made decision is later reversed. What’s even stranger than that is when a team and league official announcement is later called into question. That’s what happened with the discussion of MLS Canadian teams Toronto FC and CF Montréal hosting their first matches at home since September 2020 (when Toronto and Montreal played each other) on July 17 (this Saturday) and 21 (next Wednesday), with both teams announcing plans to have significant numbers of fans in the stands as well. MLS itself announced that move on its website, as did the teams in question. (MLS also said that the Vancouver Whitecaps would continue to play away from home in Utah for the time being, but that all clubs were in discussions about further home matches.)

However, that story then took a twist. Several reporters then relayed that, despite all the references in those releases to “MLS remains in communication with the Canadian government” and “Toronto and Montréal will be permitted to have fans and media in attendance at matches, in accordance with all local and regional guidelines,” the federal authorities in question had not actually signed off on the plan. Here’s more on this from a Sportsnet/Canadian Press report:

Though Major League Soccer and its Canadian clubs announced that Toronto FC and CF Montreal had been given the green light to play home matches in Canada as early as this weekend, sources tell Sportsnet that The Public Health Agency and federal government continue to review the request and no approval has been issued.

The federal government is expected to release a statement shortly to clarify the situation.

…A TFC spokesman said the club aimed to have 7,000 at BMO Field Saturday and 15,000 next week, with Saturday’s crowd made up of front-line health-care workers, first responders and season seat members. Montreal looks to host 5,000 fans at Saputo Stadium should the league and teams get permission to return.

Here are some further tweets on the drama here:

The Public Health Agency and the federal government have not given approval to the Toronto FC proposal for home games with teams from the US.
Statement expected soon from Immigration Minister #cdnpoli https://t.co/AsezcyoiDL

Just to be clear, they haven’t given approval yet. The proposal hasn’t been rejected yet either.
This announcement from the MLS appears to have come without federal government approval for player travel.
Still waiting on a statement from the Feds #cdnpoli

The sideways part of this unfolding is that RC Sports reporter spoke to the federal ministry directly. It was not a source… it was a direct word-for-word attributed statement from Mendicino's office. #CFMTL https://t.co/sWR3PXEjAN

To be clear – the phrase "jumped the gun" wasn't in the feds language – that was my translation to explain what is going on. It was not meant as a direct quote https://t.co/w8gS9E8JoP

As Noel Butler relayed, even CF Montréal president Kevin Gilmore said he was confused about the shift:

Kevin Gilmore says this is not a Health Canada issue. Admits he himself is confused. States club are ready no matter what capacity threshold they can have at the stadium

We’ll see what the eventual Canadian government statement is and add it in when it’s pushed out. And maybe this will be an approval of the stated plan, and none of this will matter too much for what’s going to happen. But even if that is the outcome, it’s definitely fascinating that there was government pushback not to media reports on what might happen, but rather to league and team statements on what was going to happen, which definitely seemed worded as if they already had governmental approval. Here’s the language from the MLSsoccer.com (the league website) release:

Major League Soccer announced Wednesday that based on updated cross-border public health legislation enacted on July 5 by the Canadian government, Toronto FC and CF Montréal will host the following select home matches at their stadiums in Canada:

MLS in communication with Canadian government

MLS made the determination in consideration of the substantial time players and staff have spent away from their home markets, and with Canadian fans and media in mind. MLS remains in communication with the Canadian government regarding plans for MLS Canadian teams to host their remaining home matches in Canada.

MLS clubs and match officials traveling to Canada will be subject to public health protocols required of all individuals entering the country, and only fully vaccinated players and staff are excluded from Canadian quarantine requirements. These protocols include, but are not limited to, molecular COVID-19 testing prior to travel and upon arrival in Canada.

Toronto and Montréal will be permitted to have fans and media in attendance at matches, in accordance with all local and regional guidelines.

That absolutely is not ambiguous or “still pending approval” wording. So there was a serious communication breakdown here on at least some level. And it remains to be seen if this particular version of football will, in fact, be coming home at this point.

Update: ESPN’s Jeff Carlisle passed on this from a Canadian health ministry spokesperson, which indicates that MLS isn’t pushing for a national interest exemption for these particular matches, but rather operating under general government rules.

The following is from a Canadian Federal Health Minister spokesperson. This is consistent with what #TFCLive prez Bill Manning said re: the NIE. He also said an NIE wasn't needed for games on 7/17 and 7/21, only games after that. pic.twitter.com/Yn0tl4XFbc

That suggests that these matches can go ahead as long as the opponents’ players brought along are fully vaccinated. (Which is not a certainty; plenty of athletes have expressed opposition to vaccines, and CF Montréal actually just traded Erik Hurtado after he declined to get a vaccine.) But we’ll see where it goes from here.