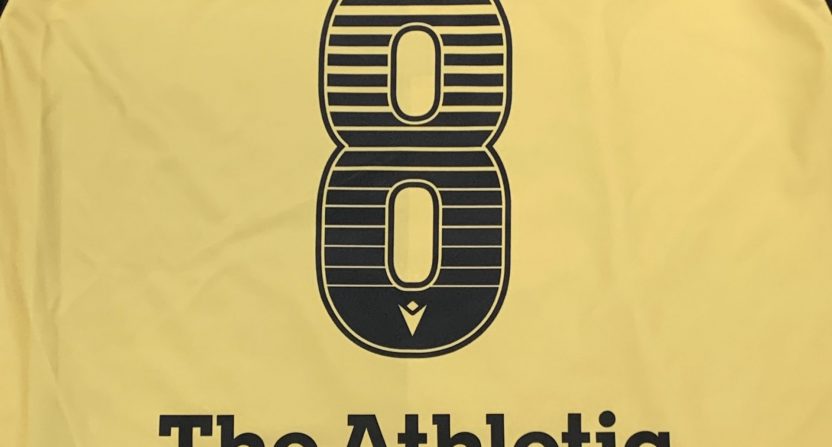 The Athletic is pivoting to sponsorship deals.

Okay, so that’s not completely true. But heading into the third round of the FA Cup this weekend, The Athletic is sponsoring the back of non-league side Marine’s kit top for their match on Sunday with Tottenham Hotspur.

We are delighted to announce @TheAthletic as the back of shirt sponsor for the match v @SpursOfficial. Marine is indebted to @TheAthleticUK for the deal, which will also see The Athletic branding adorned to the house numbers on Rossett Road. #COYM with https://t.co/3AVFU6xADJ pic.twitter.com/V68CT71bTK

Additionally, there will be The Athletic branding on house numbers on Rossett Road, which runs along one side of Rossett Park, Marine’s home stadium.

But in a potential warning flag, The Athletic is also running Marine-centric content on their site this week as part of the sponsorship agreement. I could only find one article after a cursory search on the site, so maybe the level of the agreement was overblown (or the rest is still coming), but it’s a bit weird to see a site that champions journalism essentially creating themed content as part of a sponsorship deal.

Here are some quotes from both Marine and The Athletic about the partnership.

James Leary, CEO of Marine, said “Thanks to Sinead, Simon and Aki at The Athletic for their support for this magical tie. I hope this will form the start of a longer term partnership and look forward to seeing the content that will follow. I would encourage everyone to visit their website (www.theathletic.co.uk) and subscribe.”

Aki Mandhar, UK GM of The Athletic said ‘We love amazing football moments and stories at The Athletic and they don’t get more compelling or romantic than this Marine FC v Tottenham Hotspur FA Cup tie. At a time when grassroots community clubs are under more strain than ever, due to missing gate receipts, the opportunity to sponsor and support Marine FC and help sustain their future success was a no-brainer and opportunity we welcomed. Good Luck Marine FC!”

As a one-off situation, there’s not all that much wrong with this in my mind (though other non-league clubs likely beg to differ). But if it’s the start of something more encompassing, I’d perhaps cast more of a wary eye towards this and any future club sponsorship agreements from The Athletic.