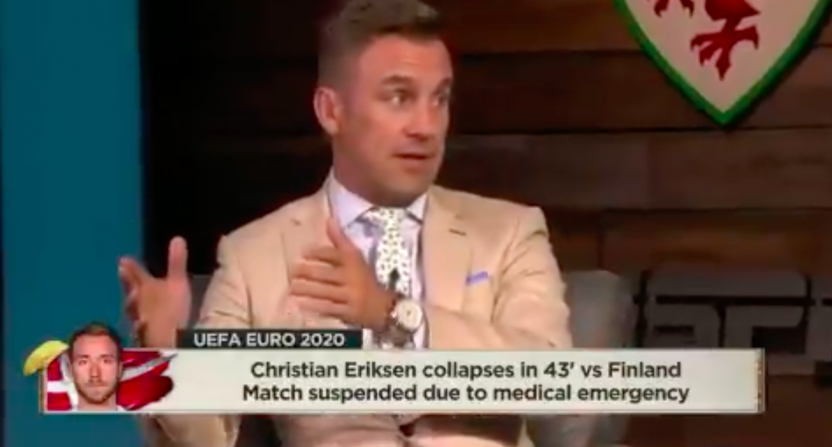 A scary medical emergency unfolded Saturday during the Denmark-Finland match at Euro 2020. Danish midfielder Christian Eriksen suddenly collapsed on the field, leading to a frantic call for medical staffers who started treated him immediately, including giving him CPR.

The broadcast of the moment received a lot of criticism due to an uncomfortable number of close-up shots and lingering angles that showed disturbing footage. Many viewers wished there had been more care in the way information was presented and that a move to the studio could have tamped down any speculation.

It’s worth noting that specific broadcasters do not control the feed, but rather, UEFA controls what is seen and broadcast.

Seeing a lot of invective being hurled at ESPN right now. ESPN has no control over the images it airs, nor does Univision. It's a unified feed controlled by UEFA.

ESPN has been running their own Euro 2020 studio show to discuss the events of the day and naturally, they discussed the situation afterward. Among the panelists was Taylor Twellman, ESPN’s lead soccer analyst. As he and his coworkers were discussing what had transpired with Eriksen, Twellman started speculating about what had happened, specifically saying that this must be related to Eriksen’s heart. He then seems to lob criticism at the medical staff for taking too long to get to Eriksen from across the field.

Here is the full clip of Twellman who’s co-host fact checks him at the end. https://t.co/VThhQkJruv pic.twitter.com/qgrMCk5hzD

“I went back and watched the 90 seconds before he collapsed,” said Twellman. “There’s no contact whatsoever. So, reaching out to a FIFA medical committee member, George Chiampas, who is the chief medical officer of the United States Soccer Federation. And you look at it from a doctor’s perspective. Two ways, was it contact or was it non-contact? This was non-contact. And so that means this is his heart.”

“It took [the medical staff] one minute and 48 to 49 seconds after he collapses to then perform the CPR when you go back and watch. And that’s the scary thing…because the longer it took for them to recognize that he was unresponsive, that it wasn’t a head injury, that’s where this thing gets scary and that’s where this thing is way more than football, soccer, any kind of sport…you just hope that the right decision was made in the perfect amount of time.”

Co-host Kelley Cates followed up Twellman’s comments by noting that they were based on the opinion of a medical doctor who was not at the match and that “we don’t know, in fact, yet what has happened to Christian Eriksen.”

The show soon went to commercial and when ESPN returned to the studio, Twellman had been replaced by Tim Howard, leading to speculation that the network had removed Twellman for making speculative remarks about what had happened and presenting the opinion of a third-party medical official as more concrete than it actually was.

While it might be understandable to see why viewers thought that, the reality is that Twellman was scheduled to call today’s match between Belgium and Russia and needed to get into the booth alongside Jon Champion. Twellman said as much on Twitter where he decided to respond to some of the negative comments he started receiving following his studio appearance.

I’m calling the Belgium game that’s why I’m off. How was I inappropriate again.

However, Twellman wasn’t just on Twitter to inform viewers of where they could find him. He also pushed back against many of those who found his comments to be inappropriate. Many of these criticisms did not include Twellman’s Twitter handle, which implies he did a little name-searching to make sure he covered his bases.

I talked to a doctor who took me thru it all. What’s wrong there?

There was no guessing on my part. Watch again.

I didn’t speculate on anything. I used the video we had and called a doctor. That’s research not speculation. Sorry

Who ripped on the medical team?! Nobody did what are you talking about

No you are missing the point. That was because nobody saw it as dangerous in the moment. Thanks for calling me POS. ??

I meant it as they didn’t know what was going on and how serious it was.

It seems like the disconnect here might be in the specific wording that Twellman chose, even if he did consult with a medical professional beforehand. Saying the phrase “that means this is his heart” came off extremely definitive for speculation based on viewing of a video, even if that speculation came from a medical professional with years of experience. Twellman may or may not have meant to sound so definitive at the moment, but that’s how it came off for a lot of viewers.

Couple that with the wording of “it took [the medical staff] one minute and 48 to 49 seconds after he collapses,” which felt to some like a criticism, even if Twellman didn’t mean it to be. There was a less judgmental way to say that, especially given that we can see the medical staff running quickly from their location across the pitch. It’s understandable that the framing of that information implies that the medical staff should have moved faster, even if that appears to have been physically impossible.

To be fair, Twellman has been sharing positive updates about Eriksen and the medical efforts as well, taking time to note that it was “astonishing” and “remarkable” what the medical team was able to do.

To perform CPR in less than 2 minutes is astonishing and I hope people understand how remarkable that is to accomplish. It ultimately saved #Eriksen life. #Euro2020 https://t.co/wjMTf5bGeX