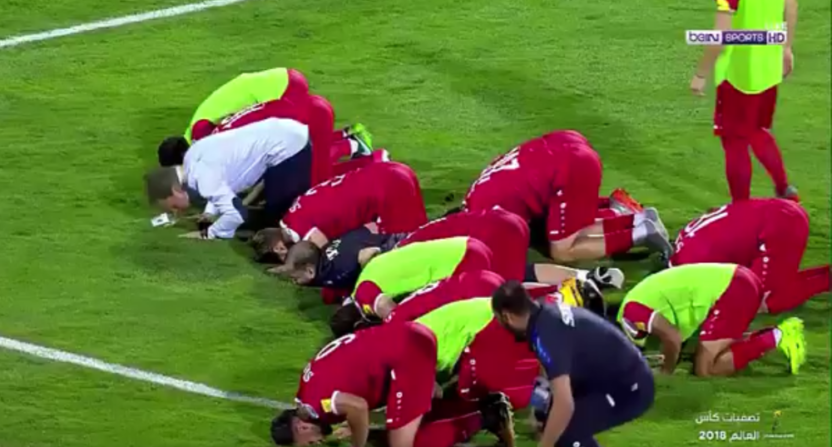 A historic sporting moment and an emotional call can make for great viewing, even in a foreign language. The Syrian national soccer team provided the latest example of that Tuesday, with Omar al-Soma returning to the team for the first team in five years and scoring the critical equalizing goal in the final minute of stoppage time against Iran.

That gave Syria a 2-2 draw, and allowed them to keep their 2018 World Cup qualification hopes alive, advancing them to a home-and-home playoff with Australia for the right to play CONCACAF’s fourth-place team for a World Cup berth. And it also led to this incredible call, with the commentator eventually breaking down in tears:

The emotion translates well even without language, but there’s a version of part of this call with some subtitles over at The New Zealand Herald. It starts with him asking “Have we thrown away the dream ourselves?” then goes on to “Come on, boys! Come on! Come on!”, then “The second goal, the second! Pass! The second! GOAAALLLLLL! Allah!” Later, as he’s breaking down in tears, he cries “The second goal! The second goal for our national team! Who scored it? Who scored? Somah! It had to be Somah! It had to be Somah! The equalizing goal! Pardon me! I’ve lost it! No one can stop them!”

That’s an incredible call, and a great moment for the Syrian team. They’ve never previously qualified for the World Cup, with their best result before this year being a final-round loss to Iraq in 1986. So this is historic for them, and a huge moment. It’s also something bringing a welcome distraction to some in a war-torn country, as the Associated Press story from Amir Vahdat illustrates:

Players, with “Syria” rather than names emblazoned across the back of their red jerseys, sank to their knees on the turf in Tehran. From the bench, members of the team’s staff with flags streamed onto the field.

Back home, the pursuit of a place at the World Cup in Russia has provided a flicker of joy in parts of a country divided by six years of war. Big screens were erected in public squares in the Syrian capital of Damascus for public screenings and fans also packed into coffee shops and sports halls to watch the broadcast from Iran.

Thousands of dancing fans filtered onto the streets of Damascus chanting “Syria” and waving the country’s flags, bringing traffic to a complete halt in the city center.

“This is the happiest day of my life,” said Bashir Rahal, a 26-year old, who was watching the game in a Damascus hotel, with the country’s flag on a table in front of him.

However, a soccer result isn’t going to cure everything or bring opposite sides together, and Steve Fainaru’s ESPN story from May on the national team’s close ties to dictator Bashir al-Assad and its role in some of his campaigns of oppression illustrates that even success for the national team isn’t going to be applauded by all Syrians. Some key lines there:

Syria’s improbable World Cup bid has pitted player against player, coach against coach — divisions that mirror the conflict that is remaking much of the world. During six years of civil war, at least 470,000 Syrians have died, and life expectancy in the country has dropped from 70 years to 55. Representing a nation with more than 12 million displaced people — roughly half the population — the national soccer team is yet another battleground between the followers and opponents of Bashar al-Assad.

The Syrian government contends that soccer is the one place where Syrians of all sides can come together in peace. Soccer is “a dream that brings people together. It gives people a smile and helps them forget the smell of destruction and death,” says Bashar Mohammad, the Syrian national team’s spokesman.

In reality, the Assad regime — backed by FIFA’s tacit support — has woven soccer into its grisly campaign of state-sponsored oppression, a seven-month investigation by Outside the Lines and ESPN The Magazine shows.

The Syrian government has shot, bombed or tortured to death at least 38 players from the top two divisions of the Syrian professional leagues and dozens more from lower divisions, according to information compiled by Anas Ammo, a former sports writer from Aleppo who tracks human rights abuses involving Syrian athletes. At least 13 players are missing. Although opposition forces have killed soccer players on a smaller scale — Ammo attributes four such deaths to ISIS — the Syrian Network for Human Rights concluded that the Assad government has “used athletes and sporting activities to support … its brutal oppressive practices.”

Soccer stadiums have been used as military bases to launch attacks on civilians. From the beginning of the war, according to players, teams were essentially forced to march in support of Assad, sometimes carrying banners and wearing T-shirts with the president’s image. “Assad was keen to show people that athletes and artists were strongly supporting him because those are the people with the most influence in the street,” Ammo says. “The marches were obligatory.”

So, yeah, the world shouldn’t necessarily be jumping for joy about this result. But it’s still a historic one, and one that will bring joy to at least some Syrians. And the emotions shown in this call definitely show how much sports can matter.