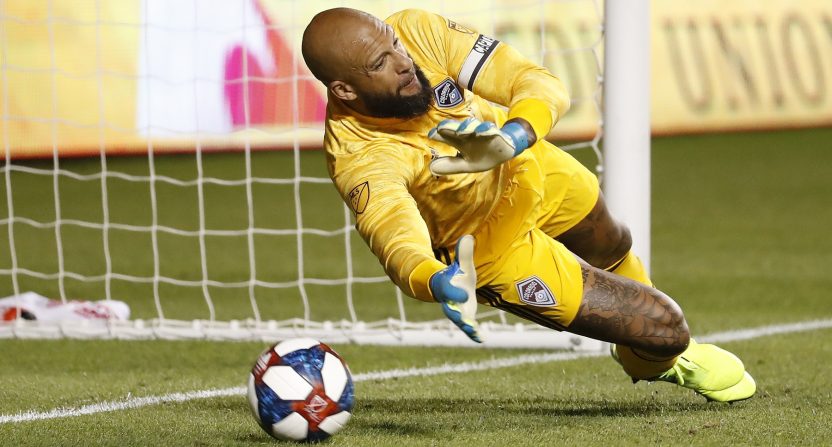 Documentaries are drawing most of the sports movie buzz these days, but sports biopics are often popular — especially if they can uplift an audience.

Amazon is hoping the story of acclaimed American soccer star Tim Howard makes for a movie fans will enjoy. As reported by Sports Business Journal’s Chris Smith, the studio (as well streaming provider and online retailer) has acquired the rights to a feature film in development that will follow the early part of the goalkeeper’s career.

Producer Mark Ciardi has wanted to make a Howard biopic ever since watching a 2005 60 Minutes profile which highlighted his struggles with Tourette’s Syndrome while playing for Manchester United. (A video of the profile doesn’t appear to be available, but the transcript is here.)

Part of the reason a movie hadn’t been made during the past 15 years is that Howard initially thought it was too early in his career for such a project. But Ciardi also told SBJ that in the early 2000s, Disney was the only studio making sports-related feature films. He’s produced several sports movies with Disney, including The Rookie, Miracle, Invincible, and Million Dollar Arm.

But with Howard retiring from professional soccer last October (he retired from international play in 2017), he felt the time was finally right to go forward with a movie project.

“It’s a pretty cool story, if I do say so myself,” said Howard, now the sporting director and a minority owner of USL club Memphis 901 FC. “We’re far enough removed from that moment that we can capture it in that best light.”

The best biopics often focus on a particular period of a subject’s career or life, rather than try to fit an entire life story into a 90-minute to two-hour film. So it’s encouraging that this Howard film will cover the early part of his soccer career when he was a goalkeeper for the New York/New Jersey MetroStars (now New York Red Bulls) from 1998 to 2003 before being signed by Manchester United.

Alexis C. Jolly — who wrote an early uncommissioned script for the Mister Rogers biopic A Beautiful Day in the Neighborhood (but wasn’t credited in the final movie) — has been hired to write the screenplay. No director is attached to the project, nor has any actor yet been cast to portray Howard.

According to SBJ, the plan is for filming to begin early next year and the hope is that Manchester United will participate in the production.