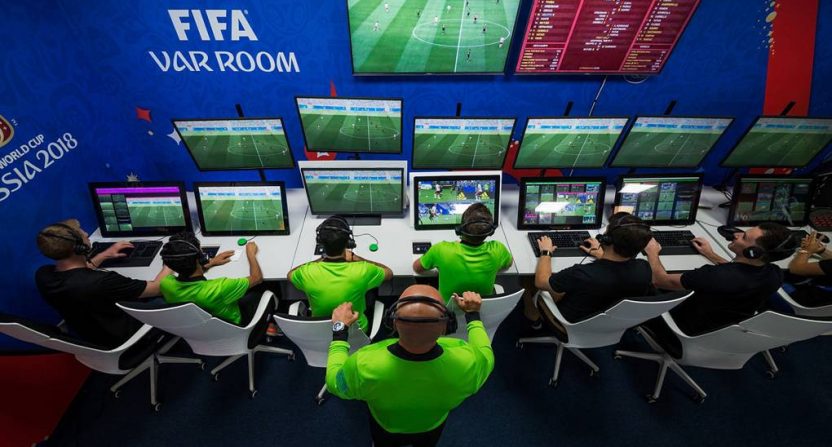 With no natural breaks in soccer, there are no commercials during soccer games outside of halftime. That sounds insane in the United States, where there are not only ads everywhere, but also TV timeouts for the sole purpose of showing commercials. Soccer has naturally been a two hour program that only has commercials during pregame, halftime, and postgame.

Now, thanks to video review, soccer has the potential for a midgame break, and companies are now beginning to sell ads to soccer’s governing bodies during those VAR breaks.

According to the Financial Times, FIFA has already been approached by companies looking to sponsor broadcasts during VAR breaks. As these would be midgame ads, it would bring a lot more money than selling ads during the current pregame, postgame, and halftime breaks. Many fans would also consider adding some sort of ad break during the middle of a game sacrilegious.

Despite potential deals being worth as much as $130 million, FIFA has rejected all offers so far because they want to make the implementation of VAR “a top priority at the moment.” La Liga and the Premier League pretty much sidestepped away from officially discussing the possibility, but one anonymous La Liga source told Financial Times it was a “possible opportunity.”

Even though FIFA has turned down these offers, this doesn’t mean FIFA wouldn’t one day change their mind. The money alone tells me that they eventually will find a way to make this work, despite the howling of fans. But as of right now, even the greediest people at FIFA realize that putting ads during VAR breaks will bring about a more negative reaction from fans who may already be anti-review because it breaks the natural flow of the game and can drag on too long.

That’s another issue organizations would face if they ever decided to broadcast ads during VAR breaks. A review could last 10 seconds or a couple minutes. Considering ad breaks are usually set in advance and the money brought in would probably mean forcing as many commercials as possible, this likely means even if a review only lasts 30 seconds, everyone may be waiting around two or three minutes for the commercial to end before play resumes.

Honestly, if there were ads during a soccer game, it would happen during referee mandated hydration breaks at the 30th and 60th minutes, which only take place in hot or humid conditions. While there would still be righteous opposition, that would be an easier scenario to envision if FIFA wanted to go down this road.

While we currently don’t have ads during soccer games, there may be a future where we are seeing them. Whether it’s during reviews or hydration breaks, if top soccer officials worry more about money than the sport, it won’t be a surprise to any of us if they eventually choose ads over a better experience for those watching at home.