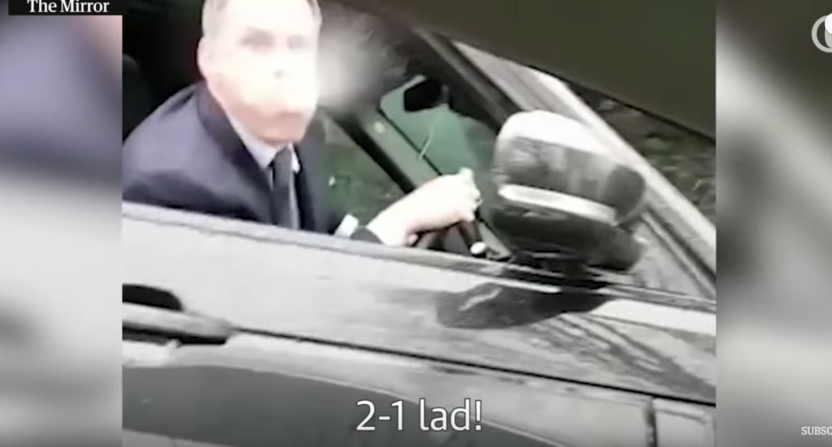 Sky Sports has suspended soccer commentator Jamie Carragher indefinitely after the Liverpool legend spat out a car window in the direction of a heckler and his 14-year-old daughter.

Video originally obtained by the Mirror shows a fan pulling up next to Carragher and yelling “2-1, lad” in apparent reference to Manchester United’s victory over Liverpool on Saturday, prompting Carragher to send a giant loogie toward the open window. A young girl off-camera can be heard saying, rather sadly, “He spat on me,” to which her father replies, “Oooh, Jamie Carragher spat on my daughter.”

Here is the clip:

As the video began to blow up Sunday, Carragher apologized on Twitter, saying he had already reached out to the family involved.

Totally out of order & Ive apologised personally to all the family this evening. I was goaded 3/4 times along the motorway while being filmed & lost my rag. No excuse apologies. https://t.co/ofrNfiwhYH

In a subsequent television interview, he apologized repeatedly and said the incident came during a “moment of madness” that felt like an “an out of body thing.” Via Sky:

“You can’t condone that behaviour no matter what, in any way shape or form, no matter wherever you are, or who you represent,” Carragher said.

“It was a moment of madness that is difficult for me to explain. Watching it back, it almost feels like an out of body thing, that madness for four or five seconds. No matter what the circumstances for anyone, you can’t behave like that.

“You’re thinking: ‘why did you react?’ That’s part of being a public figure at times. Different things get said but you don’t react like that. This is the only time I’ve reacted like that. It will be the only time I ever react again like that.

“I called the family. Obviously they were upset and disappointed last night. I spoke to the girl and that is my biggest regret. There’re lots of regrets but certainly the biggest one is for her to be caught in the middle of my altercation with the father. It devastates me a little bit more than anything else, really, that a young girl that wasn’t involved in anything, really, has now become embroiled in this.

Carragher’s many apologies were apparently not enough for Sky Sports, which released the following statement Monday:

“Sky takes this matter extremely seriously and strongly condemns Jamie’s actions, we have made that clear to him in person today and suspended him from his duties. It falls well below the standards we expect of our people.”

Carragher said on Sky that he had not tendered his resignation and that he hopes to keep his job. The former defender has worked for Sky Sports since his retirement from Liverpool in 2013.