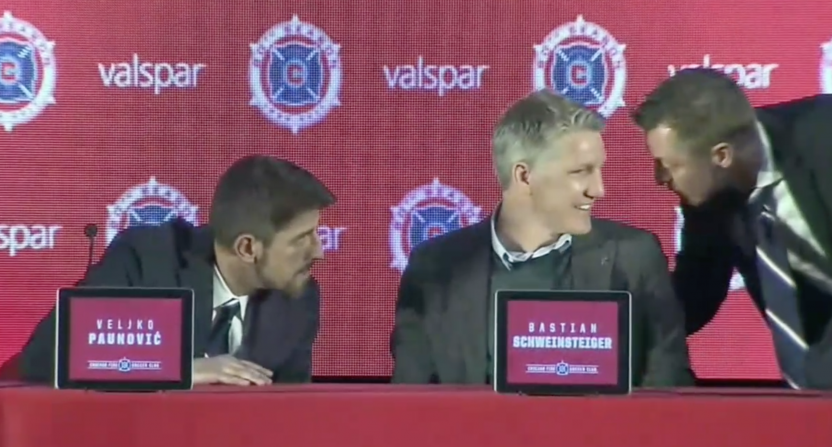 German soccer star Bastian Schweinsteiger had his introductory press conference with the Chicago Fire on Wednesday, and one reporter posed a deeply bizarre question:

With your addition to this team, is it a fair expectation to see a clear pathway to a World Cup competition come out of Chicago?

An amused Schweinsteiger asked for a translation to make sure he wasn’t hearing things. Then the reporter butted in again:

Let me re-phrase, do you think now that you’re here, Bastian, that a World Cup goal for Chicago Fire is a realistic one?

At that point Fire general manager Nelson Rodriguez mercifully interjected that the team doesn’t play for the World Cup and asked Schweinsteiger to answer the question as if he’d been asked about the MLS Cup. Schweinsteiger smiled widely and responded in some harmless cliches.

After the reporter (who identifies himself as Derek Henkle of AFP) asked the question for the first time, it was possible to give him some benefit of the doubt and assume he was asking about Chicago’s chances of hosting a World Cup. But when he inquired again, more clearly, it became clear that he was indeed referring the Chicago Fire’s prospects of winning the World Cup, which of course is impossible for a club team.

Let’s assume that this guy just had a slip of the tongue (twice) and that he meant MLS Cup and not World Cup. Because the alternative is that a guy at a soccer press conference doesn’t know literally the first thing about how soccer works. The Fire’s director of communications weighed in with a tweet that summarized all this:

That sure was a press conference. #CHIweinsteiger #cf97

Yes, it sure was.