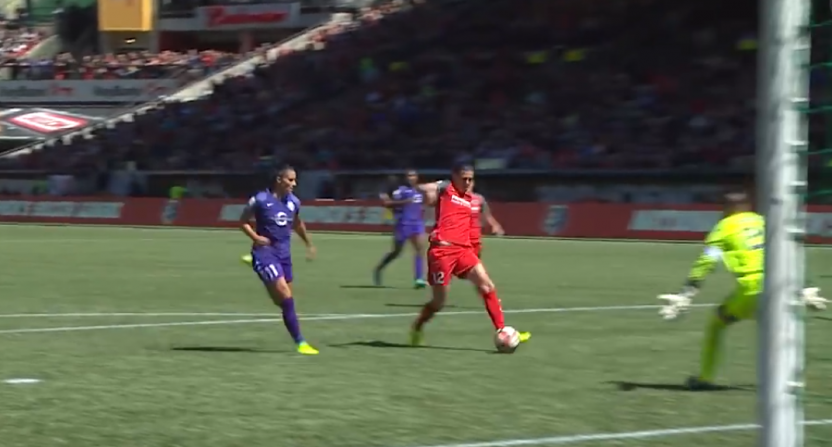 The National Women’s Soccer League kicked off its fifth season Saturday and its first under a new broadcast deal, which features a game of the week on Lifetime and other games available on the free go90 streaming service. The results for the first Lifetime game (Portland Thorns – Orlando Pride; Portland won 2-0) are particularly interesting, though, as they produced an extremely rare sports broadcasting situation. That would be one where the pre-game show pulled a significantly higher rating than the game itself:

As Sports TV Ratings went on to tweet, that may have a lot to do with the lead-in. In the slot before that, Lifetime averaged 237,000 for a rerun of the 2002 movie Two Weeks Notice, starring Sandra Bullock and Hugh Grant. So it seems probable that some watching the movie didn’t change the channel immediately, checking out at least a few minutes of the pre-game show before flipping away. It’s also worth noting that the 82,000 is an average for the whole two-hour match window; there may have been a higher audience at the start of the game, especially with those pre-game show numbers.

Perhaps even the more important takeaway here beyond the pre-game show beating the match is that these numbers are pretty decent. In fact, they’re better than some of the numbers the NWSL has pulled for previous openers on more conventional sports networks, including last year’s on FS1:

So, while the NWSL has sometimes seen better ratings than this, its audience certainly didn’t evaporate with the move to Lifetime. And the high pre-game show numbers might suggest that some other Lifetime viewers were intrigued enough to at least hear a little about the league. (That, or they got up after the movie and only changed the channel later.)

We’ll see how this plays out for them in the long run (and if it’s worth Lifetime’s while to run these games instead of movies or scripted programming), but it’s notable that Lifetime parent A+E Networks (which is a Hearst-Disney joint venture) bought a stake in the league, not just the broadcast rights. That suggests they’re in it for the long haul.

While these early ratings aren’t the best the NWSL has ever seen, they definitely aren’t too discouraging either. In fact, as Richard Deitsch might note, that 131,000 for the pre-game show is better than the 118,000 Undisputed averaged Friday on FS1. Of course, Skip Bayless doesn’t have Sandra Bullock and Hugh Grant as a lead-in, and Two Weeks Notice in that context is only what some sports media types wish he would get.