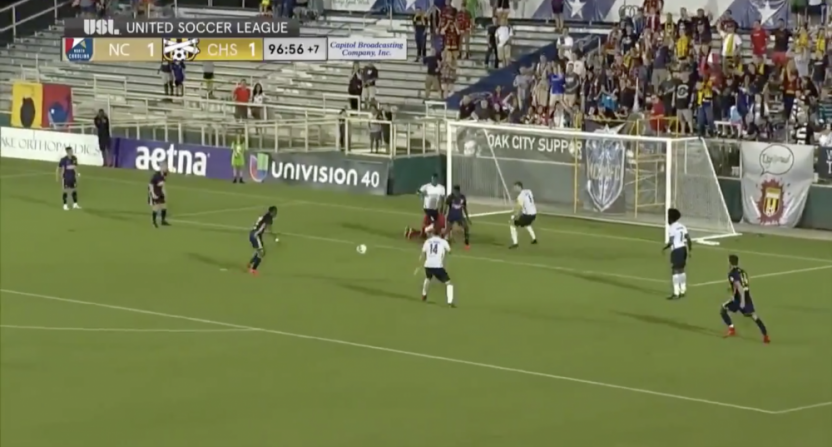 Sometimes, soccer gives us amazing feats of athleticism that result in spectacular goals and incredible calls. This, however, is the other end of the spectrum. North Carolina FC hosted the Charleston Battery in United Soccer League (U.S. Division II) action Saturday night, and in the seventh minute of stoppage time, the hosts had every conceivable opportunity to score. And somehow, they didn’t.

Oh my god. North Carolina FC just gave us both the best and worst thing I've ever seen in my life… ???? #SportsCenterNotTop10@NorthCarolinaFC @Chas_Battery @USL @SportsCenter pic.twitter.com/IirtFLgHSK

Let’s count the chances there. The first one comes when the initial player open on the wing has plenty of net to shoot at, but instead crosses the ball inside. The second comes when that cross bounces off a defender and stops right in the six-yard box. There’s then a third as the North Carolina player there drops it back for a teammate, who fires it off a defender standing on the goal line. The ball bounces to another attacker, whose fourth-chance shot is blocked.

The ball then comes to another North Carolina player, who drills it off the post from about 12 yards out. The rebound goes to another teammate in tight with the goalkeeper, and he can’t get much on his sixth-chance shot, but that rebound then winds up with a Battery player who’s able to at least get it out of the box as the color commentator breaks down in a “What in the world…” fit of laughter. Which feels about right for this sequence.

That’s definitely one of the weirder soccer situations you’ll see, and Charleston was very lucky to escape this with a draw. But perhaps they had some magical help? After all, it was “Wizard/definitely not Harry Potter™ Night” in Cary, and that led to this hilarious recap from Neil Morris at local NBC affiliate WRAL’s sports website:

With the definitely not Harry Potter™ soundtrack bombinating in the background and amid a flurry of spells and counter-charms, NCFC and Charleston battled to a 1-1 draw

…A gaggle of Muggles occupied the pitch throughout the first half, save for whatever wizard inanted “Colloportus!” to keep a lock on both goals and the scoreline unadulterated. In the 27th minute, Battery midfielder Jarad van Schaik got off a left-footed angled shot across the face but wide of North Carolina FC goalkeeper Alex Tambakis, sporting his new caution tape-inspired kit. Otherwise, each side managed just one shot on goal in the opening 45.

As a simulation Quidditch match hijacked the Sahlen’s Stadium field at halftime, Battery manager Mike Anhaeuser made some halftime adjustments to curb NCFC’s build-ups. Anhaeuser said he dropped his outside midfielders deeper to serve as cover for his three Beaters, er, back line, understanding his team would have to be content looking for the counterattack.

…From there, North Carolina FC cast an “Expecto Patronum” spell on Charleston, who apparently countered with some dark arts. In the final throes of seven minutes of added time, NCFC found about four looks inside the box, including two shots by Tiyi Shipalane that were blocked and rebounded off the right post, respectively.