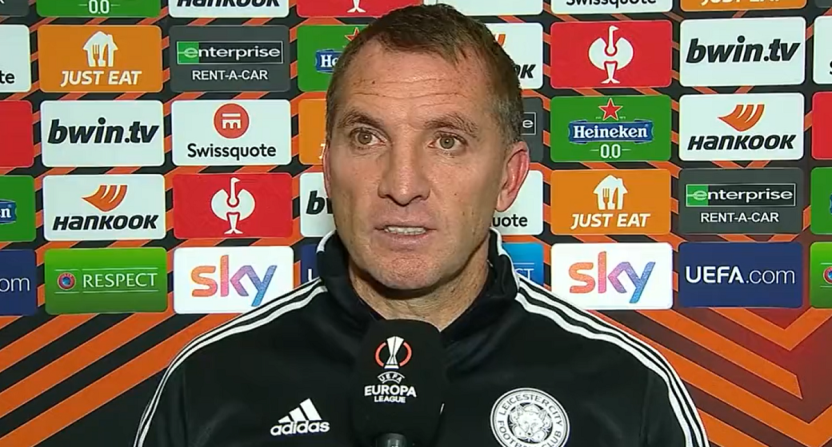 On top of their group, a win or draw against pursuing Napoli would have been enough to see them through to the knockout rounds of the tournament, which sits a tier below the Champions League but offers a potential trip to the more prestigious competition via victory.

Then they fell behind 2-0. That’s bad. But they came back to tie, 2-2. That’s good! Then they gave up a go-ahead goal in the second half, losing 3-2. That’s bad. It got worse when the other group result was very much not what they needed, sending Leicester tumbling out of the event.

Worse than just seeing their season’s European hopes dashed, though: they’re now forced to play in the UEFA Conference League, which is sort of like losing an NIT game and then being forced to compete in the CBI. (Yes, it’s not an exact analogy, but in terms of a team just wanting to go home but being unable to, it certainly fits.)

Leicester City started the day top of their #UEL group… They ended it in a competition their manager Brendan Rodgers has no clue about. ? pic.twitter.com/1nMlSs2QkX

“I’ve got to be honest, I don’t even know what the competition is, in all fairness.”

Rodgers can be forgiven for his ignorance here as the Conference League is currently in the middle of its inaugural season. For reference, it’s an effort by UEFA to give more teams a shot at European competition, those that would normally not have a shot at any kind of advancement in even the Europa League, much less the Champions League. (So, teams from smaller countries and leagues within the European confederation.)

For Leicester, that means they, along with seven other third-place Europa League group stage finishers, will now feature against the eight teams who finished runner-up in the Conference League group stage in the preliminary knockout round, for the right to advance to the final knockout round against the Conference League group winners. Considering Leicester currently sits in the middle of the EPL table, Rodgers would probably much rather be able to focus entirely on English competition down the stretch, rather than having to deal with a European travel schedule and extra matches.

That he managed to even feign his respect for the Conference League at all in his answer there is fairly admirable, all things considered.