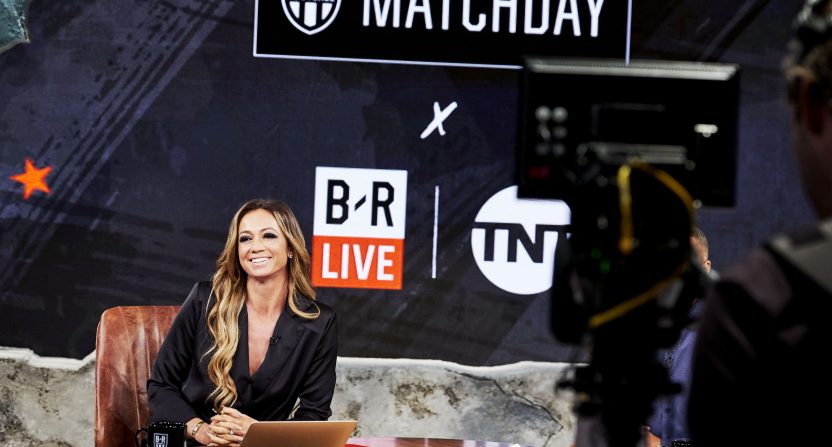 Turner wraps up its first year of Champions League coverage this Saturday on TNT when Liverpool takes on Tottenham in the final at Wanda Metropolitano in Madrid. The network, in conjunction with Bleacher Report, branded the pre and post-match segments as B/R Football Matchday, and had to navigate televising a new sport and building a broadcast team from the bottom up.

Kate Abdo, the show’s host, and Matt Mosteller, Turner Sports’ vice president of content, spoke with Awful Announcing about plans for the Champions League final, how things went in season one and what needs to be improved on for next year.

“I think it was a work in progress in some senses,” Abdo said. “I think that it’s an unusual scenario, if you think about it. Most times when you walk into a TV show, walk into hosting a show, there aren’t that many news all at once.”

Abdo and Stu Holden had worked together before at Fox, but Steve Nash came into the mix having never analyzed soccer before and Tim Howard and Maurice Edu were thrown into the mix as well.

Mosteller said that the show had to put together talent in front of and behind the camera and dive headlong into a sport the network had never televised before.

“It takes time for anybody to get comfortable working on an event like that,” he said. “So it took it took a little time for us to find the right talent and to get that chemistry meshed.”

Abdo said it wasn’t always smooth sailing in trying to figure out that chemistry between the talent and figuring out what their dynamic would be like off the screen.

“But I feel like one of the strong points at Turner is that they own live television in a way that they’re happy to share with you the ups and downs and the awkward moments or the things that happened that weren’t necessarily supposed to,” Abdo said. “So I don’t think there’s a sense of a feeling uptight about things not necessarily going the way that we initially wanted them to. I think that there’s a sense that we’re learning as we go here, and we’re figuring this one out and we’re owning that.”

That transparency is more finely tuned on Inside The NBA, but the B/R Football Matchday crew has learned to be okay with making mistakes and not be this completely polished product at all times.

“It allows us to make those mistakes and discover who we are as a team without feeling uptight about it.,” Abdo said. “And it’s important for the viewer that we kind of share and acknowledge that it’s a growing process.”

The B/R Football crew certainly embraced soccer’s social aspect with various segments and bits just like they do on Inside The NBA, and Mosteller said that Bleacher Report’s ability to reach and resonate with a younger audience was definitely an appealing aspect of this partnership.

“We kind of wanted to create a new vision for how we wanted to do soccer,” Mosteller said. “So it took us a while to kind of get a rhythm and bring in these two different parties together to kind of work hand in hand. It’s been a great partnership, but it takes some time to kind of come to a place where we kind of feel comfortable with each other. And that just takes time.”

Mosteller and Abdo both agree that things have improved as the season progressed, and part of the reason why Turner shifted from two sets to one. The season began with Abdo and Edu mainly hosting from Atlanta and good friends Holden and Nash analyzing from Los Angeles. She doesn’t think the two studio format got in the way of building chemistry, but it definitely hindered the communication and the flow of the show, both of which improved once they settled on a more traditional setup.

“I think it was simply about the ease of conversation,” Abdo said. “And I think having two separate studios made it more difficult to have in-depth conversation just because those non-verbal signs you often give somebody that you want to jump in, or that you have a thought, or that you disagree, or whatever it is, and that allows on television for one member of the group of talent to give space to somebody else or to push back on them or to tee them up. That was missing because we didn’t have that ability.”

Abdo and the Matchday crew will be at two sets, one pitchside, Saturday in Madrid, with the direction and production done from Turner’s Atlanta studio. That will cause slight, but not massive, timing delays, Abdo and Mosteller agreed. Holden, Nash, Edu, and reporter Fernando Perez will join Abdo during the 90-minute pregame show, with Atlanta Hawks guard Trae Young joining Holden and Nash for a pitchside demonstration and Dallas Mavericks star Luka Doncic operating Bleacher Report’s Instagram live from the match and appearing with Perez. Howard will be absent due to obligations from his day job as the goalie for the Colorado Rapids of MLS.

“I think it will be fun for all of us,” Abdo said.

While Mosteller said he wants to wait until after the final to start to evaluate how Turner’s Champions League coverage can improve for next year, Abdo is exciting about building on the more in-depth and interactive elements the show began integrating later on in the season.

“I think Stu is a really strong analyst, and I love how he breaks teams down, tape down, tactical conversations that he’s able to lead,” Abdo said. “And I feel like we’ve had some really nice segments where we’ve had him standing up at the screen and breaking down a team’s approach tactically, which I really enjoyed and I’ve love to see more of.”

Abdo thought that perhaps the in-depth approach can carry over to next season, even during the group stages when there are so many matches that people could get caught up in just telling the audience what happened rather than explaining how things went down.

“I don’t know what Turner’s stance is on that and how the rest of the team feels about it,” Abdo said, “but I definitely enjoyed the moments that we’ve just added more depth into our conversation, and I feel like have tried to be educating the viewer, not in a patronizing way.”

It will be that balance of education, entertainment and engagement that Turner will have to hone and navigate during its second season as it continues exploring its still new soccer frontier.